Still getting caught up from Eisner Week... 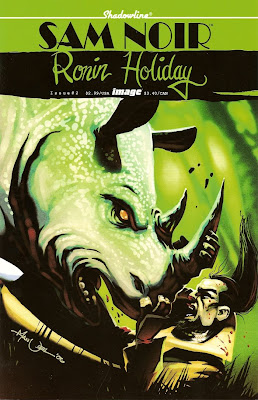 As I mentioned the other day, I still haven't read the first Sam Noir miniseries, but I'm hoping to get the collected version soon. But that's okay, because while I might get some backstory, all I need to know is spelled out for me in this series. The titular character is a cross between a samurai warrior and a Private Eye straight out of a film noir. I'm not sure what time period he's supposed to be living in, but it doesn't really matter. In fact, it's kind of purposely not defined, so the creators can throw in as many character types and examples of slang as they can think of. It's lots of fun, with some great dialogue and plenty of cool fight scenes.

This miniseries begins with Sam taking a vacation in Hawaii after what I assume is the tragic end of the first miniseries. He's planning to get good and drunk, but instead he's assaulted by killers and winds up teaming with a pirate-turned-police-detective to hunt down their leader. At the end of the first issue, they were confronted by a girl on a rhino, and they have an extened fight with her in issue #2. It's lots of fun; here's what's probably my favorite page: She takes off after getting wounded, and they follow her tracks, hoping she'll lead them to her boss. While they're tracking her, Eddie (the pirate/cop) tells Sam his origin, and it's pretty enjoyable. Sam gets to be a lovable bastard, telling us via narration he doesn't care, but figures Eddie needs to let it all out. When they find the boss, it turns out to be some kind of voodoo priest, but Sam calls him a mime. That made me laugh. And it looks like he's going to be buried alive for the next issue. Fun!

I especially enjoy the dialogue and narration, which is done in a real hard-boiled noir style. It's very funny, mixing noir cliches with martial arts tough-guy attitude. In the first issue, Sam pontificates on how he likes to play a game when he's on vacation and see how long it takes before somebody tries to kill him. And he plays very well off Eddie; they make a great team. It's an excellent comic all around. I can't wait to read the final issue, or the first miniseries. I hope Anderson and Trembley keep them coming!

Whoops, I realize I didn't talk about the art. I should mention that it's excellently moody, evoking the style of black and white noir films. Chracters almost always appear cloaked in shadows, even when they're on the beach. It's really cool; I like it a lot.
----- 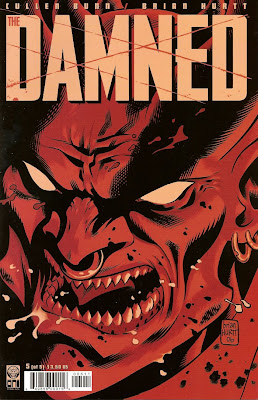 Well, we get an excellent finish to this miniseries, and the revelation that the story will be continued in future stories. Awesome! It's a classic gangster story wrap-up, with our protagonist working all the different factions so he can come out on top. Plus, we get a big fight scene in which the gigantic demon mob boss throws down on the rivals who are trying to kill him: 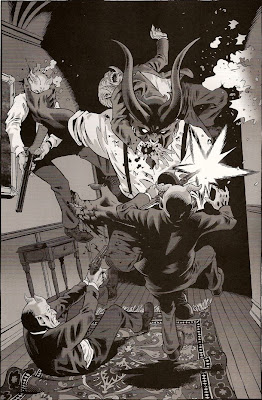 That's pretty cool. To tell the truth, I don't have much in the way of analysis for this series; I just really liked it. The Bunn and Hurtt have done a great bit of worldbuilding, maintaining a gangster-movie atmosphere, with cool supernatural details thrown in. And some of the demons they've come up with are seriously creepy. This guy, known as The Worm, freaks me out: 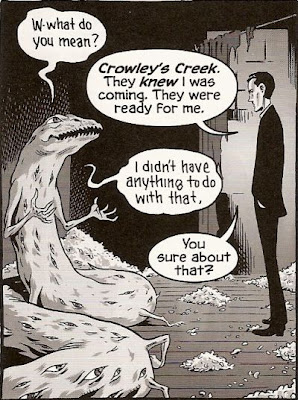 Some plot threads have wisely been left dangling, ensuring my interest in the promised sequel. Hopefully it won't be too long in coming!
----- 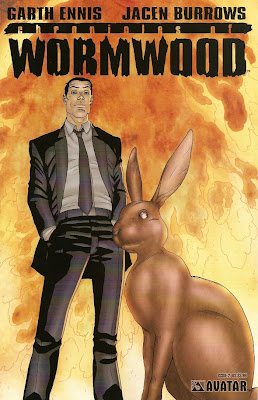 I can't think of any comic in recent memory that made me laugh so hard upon opening it to the first page as this one did. I'm lucky I wasn't drinking something, or I would have spit it out all over the pages. Well played, Ennis. I don't know if I wrote anything about the first issue of this series, but I enjoyed it quite a bit. That issue was mostly introduction, and Ennis fleshes out the world of this comic a bit more here, while setting up an interesting plot for future issues. The character of the title is the anti-christ, but he has no interest in going along with his father's plans. He has a steady girlfriend, but he's also banging Joan of Arc on the side. So he's kind of a dick, but he seems to want to be a better person. That backfires on him here, so he's kind of depressed, which should make his future (afterlife) road trip with Jesus interesting. That's right, he's buddies with Jesus, who was also bristling against his father's wishes for him, until he got brain damage from being cracked in the head at a peace rally. So now he's brain damaged, and he just sits in a bar drinking with Wormwood.

We also get a new character introduced in this issue: Pope Jacko, the Australian pope who apparenty succeeds Benedict. He's a foul-mouthed, nasty asshole who likes to screw nuns (or whores dressed as nuns) in the presence of his cardinals. And here's what he says to one of his underlings:

Funny stuff. He seems to have plans for Wormwood, or at least the church has a plan for armageddon, which his cardinals are sure is going to happen anytime now. I'm sure he'll end up playing a big part in the upcoming issues.

It's a fun book; one thing Ennis does well is religious satire, and he's going for plenty of blasphemy here. I can't wait to see what will happen next.
----- 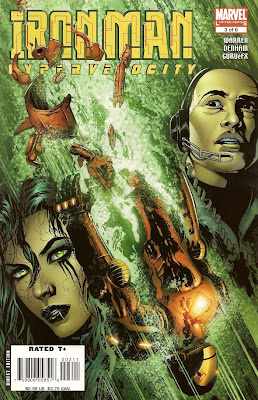 I've been meaning to do a review of this book since the first issue, but for some reason I never got around to it. Suffice to say, it's been great fun so far. I love Adam Warren's flair for techobabble-filled science fiction, and Iron Man is a great character for that sort of thing. Plus, he's also great at hyperkinetic action, and he gives us plenty of that as well. For those who haven't read any of the series, I'll give a brief description of the first issue, at the end of which was a huge twist. That issue featured S.H.I.E.L.D. trying to take down Iron Man, and it was basically an issue-long fight between Tony and a bunch of fighter jets. Tons of fun, but at the end [okay, here's where the SPOILERS start], Tony's head was blown off, and it was revealed that the suit was empty. In the next issue, we found that Tony had developed a program to upload his consciousness into the suit in case of possible fatal injury, and the suit is actually "Tony 2.0" on the run from S.H.I.E.L.D., who think it has gone rogue. So the series is actually the adventures of Tony 2.0, who's trying to get to the bottom of who attacked him. Plus, we find out that "he" has also been infected with a virus which appears to him in the form of a pierced, tattooed goth chick, and she's planning to overwrite his program and take over the armor. Fun!

Like I said, Warren is great with the technofetishistic descriptions of all this, and the action is killer. My only complaint with the series is the art. It's not bad, but it doesn't fit the story nearly as Warren's own art would, or at least somebody who's style is closer to his own. He draws in a hyperkinetic manga style, and Denham seems like a regular Marvel artist who's struggling to keep up. Here's an example: 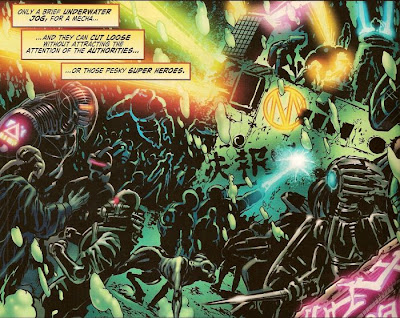 This is a scene from issue #3 in which Tony 2.0 is attending a mecha rave at the bottom of the ocean, trying to find some information about who attacked him. Warren would have put lots of detail into this panel, giving us a look at the crazy attendees of this party. But Denham just gives us a smudgy blur of figures. It's really too bad. I don't fault him; he's doing the best he can, but he's just not really the ideal artist for this sort of thing. For a better example of an artist suited for work with Warren, check out the Livewires series that he did with Rick Mays a year or so ago. That was pretty awesome.

I shouldn't fault Denham too much. Check out this scene from issue #2, in which Tony demonstrates the new version of the armor by having it do the dance from the climactic scene of Napoleon Dynamite:

That's hilarious. So, despite my reservations about the art, I highly recommend this series. Great action, good dialogue, crazy technical details, and Iron Man being cool rather than a dick. Good times.

By the way, Adam Warren has been posting layouts and other information about the series in his journal on DeviantArt, so check those out if you're interested.
-----

Well, that's it for me for today. I'll be back tomorrow with a movie review and a look at solicitations, hopefully. Bye!
Posted by Unknown at 7:42 PM