Wasn't that a computer golf game from about 15 years ago? Anyway, this will eventually be a link post, but for now I'm just going to link to a cool webcomic that Kevin Church pointed me to: Soft Instruments. It's a wild steampunk/alternate history story. Here's the synopsis from the site:

Welcome to 1997, in a world much different from our own. The rise of the steam age prevented the industrial revolution as we know it from ever having occurred at all. As the world's only steam powered juggernaut, Great Britain spread out and assimilated the rest of Europe into the Anglo-centric super power The Union of European Allies. The cultures and languages of these occupied countries were eventually forgotten or pushed far underground, as the Victorian way was cultivated and held onto as the dominant and accepted culture.

As the Union of European Allies celebrates it's 100th anniversary the classes have never been further apart. The "Gentlemen Class" ...royalty, government officials and people of influence and affluence are the privileged few who have been "socketed". Steam powered identification sockets have been implanted into there arms giving them an unforgeable passport to cross international borders and travel freely within all union territories. The majority of the population however, the unsocketed masses, either vie for Gentlemanship by serving the state, or work in huge prison-like factory camps producing goods and services to sustain the self- sufficient Union.

Genocide in Central Asia, and civil war spreading throughout the Americas are only a few of the UEA's concerns. Their own workers have begun to organize, and the UEA Government (or "Central Gov") has begun to fear domestic terrorist attacks and possibly even a mass worker revolution. Security has never been more stringent as they tighten their grip on the populace.

As our tale begins, fabled explorer, scientist, adventurer and Gentleman Dr. Elezear Zednik is sent to Union Territory #617-03 to investigate a rash of mysterious disappearances among the city's factory workers.

As he arrives he is met with hostility and mistrust by the local constabulary.

I'll add more links later as I find them.

Brian Wood shares some art from Northlanders, his upcoming Vertigo series about Vikings.

Joshua Middleton has some covers he recently did up on his blog. I'll have to add that to the sidebar. He also features preliminary sketches and stuff, which I always like to see. I like this page of Flash doodles: 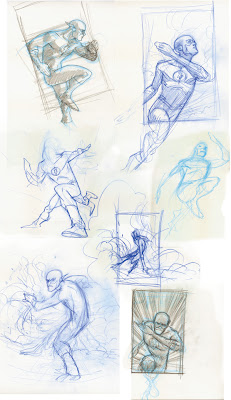 Oh, cool! Newsarama reports that Hayao Miyazaki has a new movie in the works, called Ponyo On A Cliff. Here's the description: "[The film is] the story of Sasuke, a five-year-old boy, and a Princess Goldfish (Ponyo) that wants to become human. Production on the film began last October and it is slated to be released in the summer of 2008. Miyazaki is creating the storyboards himself in watercolors and it is thought that the feature will be produced in the traditional hand-drawn 2-D manner." I can't wait.

Also on Newsarama: apparently a girl named Mindy Owens co-wrote the recent Runaways Saga, a recap comic that gets people caught up with the series' plot if they're joining when Joss Whedon starts writing. I took a look at this thing in the store, and decided against getting it. I've read every issue, so I don't need to know the plot. It's also by C.B. Cebulski, who I don't like. There was a bookend strip in which the characters read Molly's diary, which makes up the main content of the comic. Well, it looks like Cebulski asked Owens to help him write the diary portion of the book, as she's a long-time Runaways fan. Good for her. It almost makes me want to buy it. But I won't.

I was going to point this out the other day, but I never did. The popular webcomic Penny Arcade is having a video game adaptation made. Mike Krahulik, the comic's artist, posted some art for the game, which will be 3-D, but will have some 2-D animated story sequences which are done by other artists. He gave some examples of the art that the animators did, and his corrections to it that showed them how to ape his style more closely. I found it fascinating, as he has a somewhat simple, cartoony style, but he's very specific about it. It's really cool to see him point out all the little details that he keeps consistent in his art.

I haven't had a chance to watch this yet, but apparently you can see an animation that Chris Ware did for the opening of the new This American Life show on Showtime.

From The Comics Reporter: Cory Doctorow, a science fiction author that I like a lot and one of the editors of Boing Boing, is going to have several of his short stories adapted into comics by IDW. Cool!

Via Journalista!: Same Hat! Same Hat! has some pictures of manga they scored from Book-Off, a used book store in NYC. Weird, cool stuff, including an adaptation of Crime and Punishment by Osamu Tezuka!

Via Journalista and Dorian Wright: No-Sword (which I think is a scanslation site) has some scans from a new Japanese manga anthology called Comic Charge, including a scene of an alien potato farting on a girl. Apparently the Japanese view potatoes similarly to how Americans view baked beans. Weird!
-----

UPDATE on 3/24: Newsarama has an interview with Adam Warren about Empowered, his graphic novel that came out last Wednesday. It's pretty informative. Hopefully I'll have a review of that up soon.
Posted by Unknown at 8:54 AM