In which mental tangles get unraveled 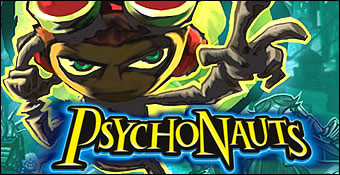 So I finally finished the game. It's a pretty awesome game, and lots of fun. But before I talk about the final parts of the game, a few quick criticisms. The controls are a little goofy, especially when you're expected to navigate irregular paths and it's difficult to tell when you might fall into some chasm or something. I guess that ties into the other criticism, which is that the graphics are somewhat muddy. This might be unique to the Playstation 2 version of the game, as the Xbox and Gamecube (as well as the PC, if it's up to date) are a bit more powerful and might have better-defined visuals. These aren't dealbreakers by any means, but there were sections that were frustrating to get through due to these issues.

But enough negativity! Let's talk about the cool stuff! (by the way, SPOILERS for the end of the game in pretty much the rest of this post. And if you want to get caught up on my previous posts about the game, click the "Psychonauts" tag at the bottom of this post.) Since my last update, I was able to scale the tower of the insane asylum, free the kidnapped Psychonauts, and confront the evil mastermind who was planning to take over the world. After an explosive psychic battle, I had to confront him in his new form, a battle tank controlled by his disembodied brain. After defeating the tank, Raz's brain also gets separated from his body, and then the two brains end up intermingled, plunging you into a mental world that is a combination of both characters' psyches. Raz, as I might have mentioned earlier, has run away from his family's circus, so his mind is filled with tents, tightropes, trapezes, and other circus-related paraphernalia. It turns out that the bad guy, Coach Oleander, had some childhood trauma due to his butcher father's slaughter of his pet rabbits. So, his mind is filled with images of meat. Thus, we end up with a circus constructed of meat and filled with grinders that spit out monstrous versions of the Coach's rabbits. It's delightfully surreal. Unfortunately, the only picture I could find of the meat circus is not an especially good representation: 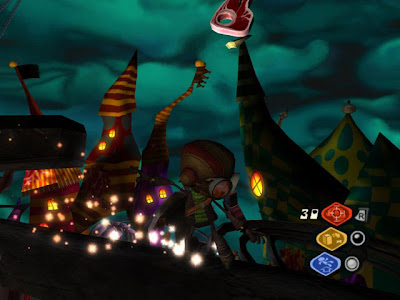 After some platforming sequences in which you have to protect a childhood version of the Coach, you end up fighting a gigantic version of his father the butcher: 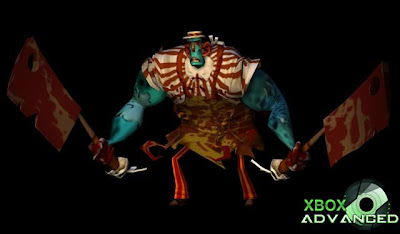 Yikes. After defeating him, Raz's own nightmares make an appearance, as a freakish version of his father appears and taunts you into following him through a maze of tightropes, trampolines, and trapezes while flinging flaming juggling clubs at you. As we learned earlier, Raz's father forbade him from using psychic abilities, but Raz ran away to the psychic summer camp. He doesn't understand why his father is mean to him like this, since he suspects his father is also psychic.

Eventually, you make it through the obstacle course (which seems to be plagued by a some sort of ghost or apparition that keeps calling your name), only to get sucked back into the tent where you fought the butcher, where you discover that the two fathers have been conferring. They decide to team up against you, forcing you to fight the butcher again, but now he has flaming knives and you also have to dodge the explosive clubs that Raz's father throws from the sidelines. After defeating the butcher (he falls into a huge meat grinder), the apparition that you saw earlier breaks through into your (and Oleander's) psyche; it's Raz's father! As Raz suspected, he's also a psychic, and he was just trying to protect Raz. He defeats the evil mental version of himself, flinging it into the grinder as well. But then a freakish amalgamation of the two fathers rises from the grinder and renews the attack! Raz's father assures him that since it's his own mind, he's the powerful one here, and lends him all his psychic energy for the battle. So as you fight the combo-father, you assume a giant form of yourself consisting of mental energy. It's very cool. You're easily able to defeat the monster, and then disentangle yourself from Coach's mind. It's the end of the game, but, in a good scene that sets up future sequels that will probably never happen, the agents decide to ask Raz to become a Psychonaut.

It's a great ending to a fun game, and the scenes between Raz and his father are actually rather touching. His father had seemed mean and overbearing from what Raz said earlier in the game, but it turns out he just wants what's best for his son. That's one of the great things about this game: while it's incredibly enjoyable to use and develop your powers, and the script is very funny, the characters are very well drawn, such that you relate to them and come to care about them. That's something at which games can excel, since they place you in direct control of a character. It's good to see a game which uses this aspect so well. I highly recommend it.
-----

Bonus: Since this is my last Psychonauts post, I figured I would show a couple more cool pictures: 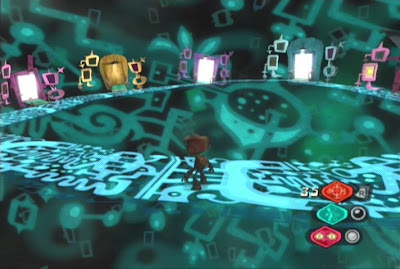 This is the "collective unconscious", from which you can enter any of the minds you previously visited. 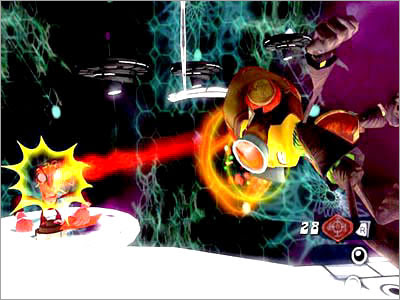 And here's Raz blasting a "censor" with his mind. Cool!
Posted by Unknown at 10:46 AM