Well, it looks like I've run out of material in discussing The 'Contract With God' Trilogy, so, barring an epiphany sometime in the next couple days, this post will bring an end to Will Eisner Week. Here are links to the rest of my Eisner posts:

I don't have any more subject that to discuss at length, but there are a few other things I wanted to mention, so this is going to be a "miscellaneous observations" post. 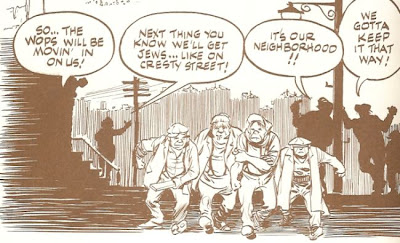 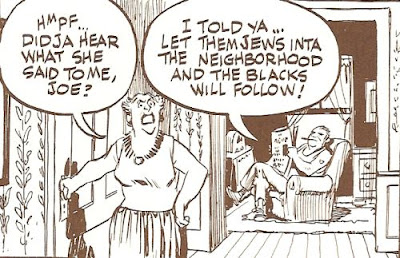 I've touched on Eisner's unflinching depiction of racism in some of the other posts, and I wanted to mention it one last time. It was a subject Eisner never shied away from, especially since, being Jewish, he experienced it firsthand. I know of at least two other books he's done dealing with racism: To the Heart of the Storm, which was a series of his encounters with racist attitudes while growing up; and The Plot, his final work, which dealt with anti-Semitic propaganda. It's an important subject, and he deals with it in an adult manner, especially in Dropsie Avenue, where we see it lead to a lot of violence.
----- 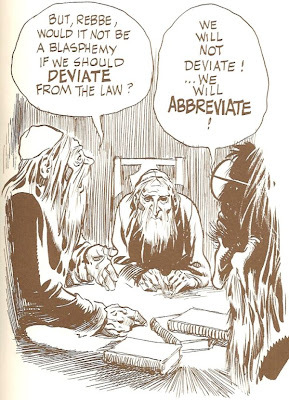 I love the dialogue and accents that Eisner put in his characters' mouths. Like the art, it was often exaggerated, but it was very effective in establishing their personalities. Especially the Jewish characters; I find myself wanting to read the dialogue aloud in the voice of a Jewish comedian like Jackie Mason. 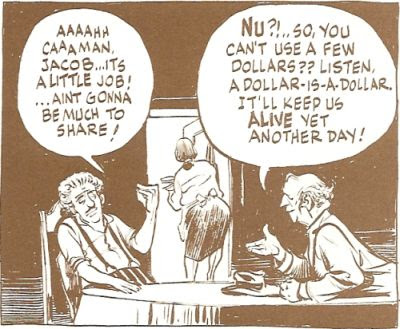 The above scene is one of my favorite demonstrations of this. We have the repeated use of the word "nu" (I'm still not exactly sure of its meaning), the distinctive cadence of the Jewish accent, and an Italian accent thrown in. Quite enjoyable.
-----

I don't know if this really counts as a theme or recurring motif, but the number of characters to experience heart attacks in the book amused me. 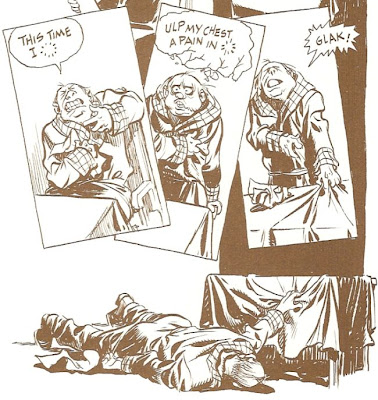 This one is actually another great example of Eisner's use of layouts, with the panels askew as the character is dying. Very nicely done. 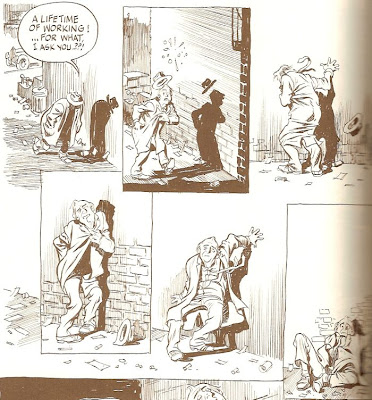 This is another good layout, with each of the panels in the second row lower than the last, capturing the "sinking feeling" as the character collapses.

And this is the above character's wife, who worried her son with a fake heart attack, then experienced a real one!
-----

Well, I could keep going on like this, pulling things I like out of the book, but I'm going to put an end to it. In summary, I'll say that I think Eisner was a genius at comics, and I look forward to reading more of his works in the future. Any commentary (on any of these posts) about Eisner is welcome; if you think I'm way off about something, or you want to add some thought of your own, please do!
-----

I've put a lot of time into these posts over the last week, so I plan to try to relax a little more over the next few days. Expect content to be fairly light, although I would like to do a look at comics that came out this week. But hopefully I'll resume normal operations soon. See you later!
Posted by Unknown at 7:12 PM