Me, I want to invent a steam-driven robot butler

The Invention of Hugo Cabret
by Brian Selznick 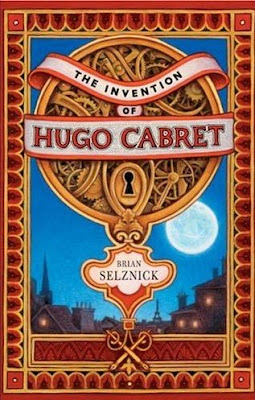 My wife bought this book recently after going to a library event at a local bookstore, and it looked so cool I had to read it. Plus, the author was at the event, and her descriptions of his influences and other things he talked about made it sound incredible. But I'll get to that later.

I'm going to call this a comic (Scott McCloud would probably disagree), but it kind of falls into a grey area between books and comics. It's really more of an illustrated children's novel, but many, if not most, of the illustrations do a lot of the storytelling through sequential art. Whole sections of the book will be told mainly through series of images, and what incredible images they are! Selznick's art is beautifully detailed, with lots of heavy cross-hatching (I think that's what it's called) and shading. The characters' faces and limbs are incredibly expressive, and the backgrounds, whether small rooms or views of the exteriors of buildings, are lovingly detailed. It's excellent work.

Selznick was largely inspired by film, especially the silent films of the early twentieth century, and it really shows. The sequential art sections are wonderfully cinematic, with the "camera" sometimes seeming to zoom in over several pages (each picture is a double-page spread) on a specific detail.

(You can click on any image to enlarge it. Sorry if the crease in the middle of each image looks weird; it's a thick book that's kind of difficult to scan). 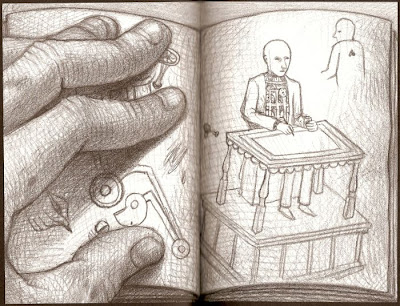 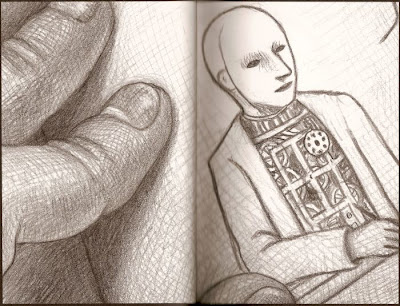 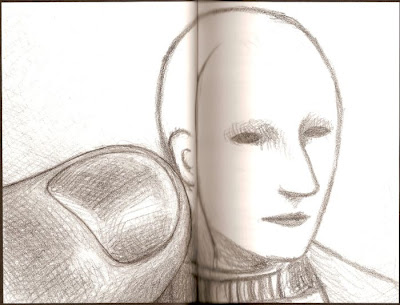 Other times it will follow characters through a "scene", and it's easy to imagine the action taking place on a big screen. 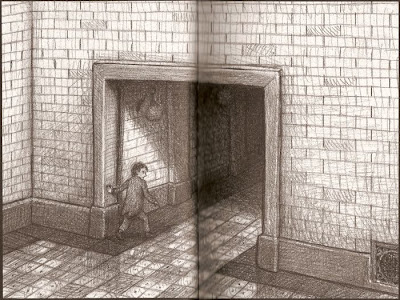 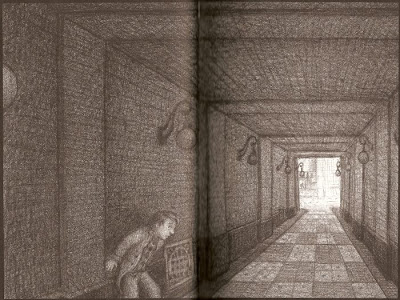 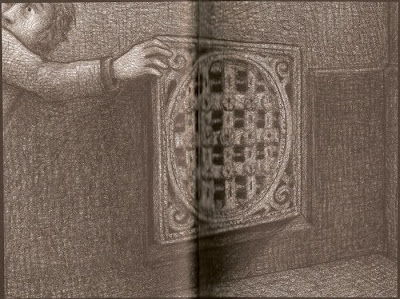 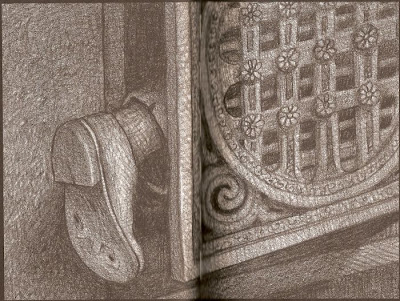 The plot concerns the young man of the title, a twelve-year-old orphan who is living in the Paris train station and working on maintaining the clocks. The year is 1931. Hugo's father was a clockmaker, and he taught Hugo all about the workings of clocks and clockwork. Before he died, his father discovered an incredibly complex automaton at a museum where he worked. It was a small man at a desk who appeared to write or draw something when wound. It had been forgotten in the museum's attic and fallen into disrepair, but he was trying to fix it before he died. Hugo managed to rescue it from the ruins of the museum after it burned down, and now he's trying to repair it himself, in hopes of making a connection with his father. Having been left on his own after the death of his parents and the disappearance of the uncle who took him in, he lives by stealing food and maintaining the clocks in the station, which was his uncle's job. A monkey wrench is thrown into his plans when he gets caught trying to steal toys (which he hopes to disassemble for parts for the automaton) from a toy shop in the train station, and the old man at the shop takes the notebook Hugo's father had drawn up containing diagrams of the mechanical man. Thus Hugo must form a relationship with the old man (and his adopted goddaughter Isabelle) to try to get his notebook back.

There are quite a few more complications to the plot, but that's enough to give a taste of the book without spoiling anything. Later, movies factor heavily into the plot, especially the movies of Georges Méliès, who was an incredibly influential French filmmaker in film's early years, and he's obviously a big inspiration for Selznick. I've never seen any of his movies, but after reading this book, I want to search some of them out. The effects he was able to pull off using the resources he had are absolutely amazing. One of the most famous images from early film is from his A Trip To the Moon, in which a rocket gets stuck in the eye of the man in the moon. This image also is very important in the book, as it's an image Hugo's father described to him when sharing his love of movies.

If you've read my blog for long, you probably can tell I'm something of a film buff as well as a comics fan, so this book is right up my alley. The prose sections are pretty simply written, as they are meant for children, but they're very effective in companion with the pictures to draw the reader into the story and get them involved. It's really an incredible book, and I can't recommend it highly enough for anyone who's interested in comics, children's literature, or film.
Posted by Unknown at 10:25 PM