Muuurder! And chains. And dancing.

I saw two movies in the theater yesterday, so here's what I thought:

Samuel L. Jackson is the man. He can cash in and do lame stuff like Snakes on a Plane or The Man, but then he'll come back and do something like this movie and remind us why he is so cool. But I'm getting ahead of myself. In this movie, he plays an aging ex-blues musician who is now a farmer in a small town outside Memphis, Tennessee. His wife recently left him for his brother, and he's pretty pissed. At the same time, Christina Ricci, playing a young woman who lives in the same town, is pretty upset because her boyfriend (Justin Timberlake), a soldier, is being sent away, presumably to Iraq. We find out that she was the town slut, sleeping with pretty much everyone that crossed her path in an attempt to quiet her personal demons. Timberlake has been a stabilizing influence in her life, and she really loves him, but after he leaves she goes on a bender, getting trashed and fucked repeatedly. She ends up getting beat up and seemingly left for dead by a guy, and Jackson finds her passed out on the side of the road near his house. He takes her home, cleans her up, and cares for her. He has his hands full though, as she's feverish and prone to screaming and running out of the house in a daze. So he decides to get a chain, lock it around her waist, and attach the other end to his radiator. Eventually she comes to and demands to be released, but he's decided that she's broken, and he's not going to let her go until she's fixed. This all sounds pretty trashy and exploitative, but the movie slowly turns into a fairly touching relationship drama about the two of them coming to terms with their lives.

It's a good story, but the performances are what really make it sing. Ricci manages to disappear into her role completely, coming off as a bruised, hurting girl who has turned to physical pleasure to quiet her mental pain. And Jackson, well, it's surprising nobody thought to make him a blues musician before this. He sings and plays guitar a few times, and he's absolutely electric. In one song, he even gets to say "motherfucker", Pulp Fiction-style, while giving that scary wide-eyed glare that he does. It's awesome. And my favorite scene in the film is when he's playing the song that gives the movie its title in the middle of a thunderstorm. He's playing this really cool pink electric guitar, and it's blaring out a deep, mournful howl in the midst of overwhelming thunderclaps. I had chills running down my spine. Amazing.

So, this one gets my recommendation. Plus, check out this cool, comic book-inspired poster for the movie: 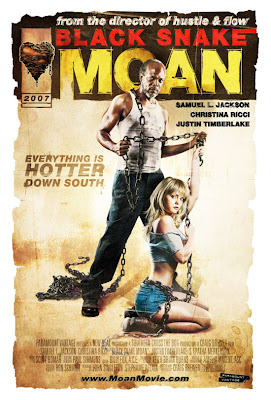 Wow, this was pretty good, and not really what I was expecting. Most modern serial killer movies are basically horror movies, with creepy villains that keep striking in the middle of the night while ominous music is playing, and the police end up having a faceoff with them in cinematic fashion. This one is different. Being based in fact, it's really more of a crime movie. Sure, we see some of the murders, but they're mostly shot in a matter-of-fact way, and there's no scenes where a girl is in a dark room when a cat jumps out and scares her, so she thinks she okay, but then the bad guy is around the corner, and he chases her and she tries to run away, but he still manages to catch up even though he's just walking purposefully and she's running as fast as she can. One of the murders is even in the middle of the day, when a masked man approaches a couple laying on a blanket by a lake, robs them with a gun, ties them up, and then stabs them a bunch of times.

I didn't really know many of the facts about the Zodiac killer going into this film, so I can't say how well it presented them, but if if failed, it wasn't for lack of trying. Many, many facts about the case are relayed through the police and reporters investigating the case. And it seems to be a case that fascinated the public, as the killer kept sending taunting letters to San Francisco newspapers, with codes that supposedly revealed his name or where he would strike next. It's really a fascinating look at a real-world serial killer investigation; we see the police try their hardest to piece together the clues and find the guy, and since the newspapers were involved, we see the reporters try to do the same, whether in aid or detriment to the cops.

The direction by David Fincher also really well done. He's known for his moody atmospheres in Seven, Fight Club, and Panic Room, but here he keeps it pretty restrained, mostly focusing on the newsroom of the San Fransisco Chronicle or the police headquarters. He also goes easy on the effects (at least as far as I could tell), with only a couple scenes demonstrating his technical wizardry. There was one cool shot that indicated the passage of time by panning up from the base of the TransAmerica building as it is being built in what looks like time-lapse photography. It's pretty cool. Also, (and this might be directed at the screenwriting rather than the direction) I love that characters in the large cast only show up when it's appropriate; homicide detectives Mark Ruffalo and Anthony Edwards don't show up until at least a half hour into the film, when they get assigned to a murder that turns out to be a Zodiac killing. We meet crime reporter Robert Downey, Jr. and political cartoonist Jake Gyllenhaal early on, when the first letter is sent to the newspaper, but later they disappear for whole sections of the movie as the focus shifts to the police. The last section focuses almost entirely on Gyllenhaal, as his character becomes obsessed with the case years after everyone else has seemingly forgotten about it.

The cast is uniformly great as well. Downey is hilarious as always in his fast-talking role, and Gyllenhaal plays it very well, starting out curious about the case due to his interest in puzzles; we see him get more and more obsessed as the film goes on. Ruffalo and Edwards have a very good rapport, and we can see how dedicated they are to their work. Chloe Sevigny plays Gyllenhaal's wife, and she's good in her small role. Brian Cox shows up for a few scenes as a psychologist called in at the killer's request. There's even a small role for Donal Logue, one of my favorite character actors, as a policeman in a different county where one of the murders took place. Everyone does good work, but the real star is the true story, which still remains unsolved to this day. That's pretty risky, since the movie could be dramatic and finger a specific person, but Fincher makes it more ambiguous. We get an idea who the culprit might have been, but nobody really knows for sure. It's quite good, and I really recommend it, especially if you're tired of the usual Hollywood serial killer formula.
-----

I also watched Pennies From Heaven on the Tivo last night, but I don't want to do a full review of that one. It was great, being the type of musical I love, where the songs are presented as fantasy sequences where characters break into song and everyone around them joins in. Plus, there's lots of really cool dancing, including what I think is the only time Christopher Walken has danced on film. This one also takes the interesting tack of, rather than having the actors (or similarly-voiced singers) sing the songs, they lip-sync along with songs from the 30's, when the story takes place. It's pretty cool. And did I mention the amazing dance scenes? A couple of my favorites were the one where Steve Martin and Bernadette Peters danced in front of the screen of a Fred Astaire movie, following his moves exactly, and Vernel Bagneris (whoever he is) singing the title song among a rain of pennies, which he seems to swim through by standing on one foot and shifting his legs back and forth. Huh, that sounds lame when I type it, but it looks incredible. Anyway, check it out if you like that sort of thing. It's awesome.
Posted by Unknown at 10:40 AM

Email ThisBlogThis!Share to TwitterShare to FacebookShare to Pinterest
Labels: movies