That's right, today I'm going to look at Eisner's depiction of sex. It's safe to say that pretty much this whole post will be NSFW, so be forewarned. When Eisner wrote A Contract With God, he was working to bring an adult sensibility to the medium, and dealing unflinchingly with sex was a part of that. Sex is a part of adult life, so Eisner chose to depict it in some of its many forms. Out of the three books in The 'Contract With God' Trilogy, A Contract With God deals with the subject the most, probably because Eisner was going all out in trying to break ground. Here are some examples:

Here's the street singer succumbing to the wiles of a former opera diva. Eisner definitely made his women sexy, even plus-sized women like this one.

Here's the lonely super, surrounded by the nudie pinups on his walls and unable to get the girl who lives upstairs out of his mind. The lower part of the page is a wonderful depiction of his state of mind, with chaotic images swirling around and a literal view through his eye sockets of what he's imagining as he is (apparently) pleasuring himself. Very well done.

This panel is from the final and most sex-filled story in A Contract With God, "Cookalein". This guy is taking advantage of his wife's absence while vacationing in the country to spend time with his mistress.

And in the country, we have the beginnings of an interesting scene. 15-year-old Willie (who is actually a stand-in for Eisner himself) is being seduced by an older woman. That night, he is visited by her in his hay loft bed:

They are interrupted right after this by her husband, who smacks her around a bit before they start up with their own "activities":

Wow, that's quite the interesting experience for young Willie. Eisner says in the introduction to the book that Willie in this book and A Life Force represents "the youthful me", and that "Cookalein" is an "honest account of my coming of age". Who knows how much of this part of the story is actually true, but it's a hell of a way to lose your virginity.

And then we have two young "lovers", who we know are actually both gold-diggers hoping to find a rich spouse. This part of the story doesn't turn out well, as we'll see tomorrow.

And that's it for A Contract With God. Eisner was definitely trying to dealing with adult subjects, including sex, infidelity, and pedophelia. I think he was pretty successful, but Contract is certainly the clunkiest of the trilogy in terms of storytelling, as he was concerned with trying something new and breaking ground. In A Life Force, sex is an issue, but by this time Eisner was developing a well-flowing storyline, and sex was just one part of the whole. Examples:

This is the couple from this scene yesterday and this scene a few days ago. Here they are realizing their love, but afraid to consummate it due to the prejudices keeping them apart.

This is the man from this scene, consummating his long-held love for the woman he helped escape Nazi Germany. It's beautifully realized, as the older couple fades away and we see their memories of the first time they made love.

That's about all that I found notable in A Life Force. Dropsie Avenue has even fewer sexual scenes, although we do see at least one scene about the consequences of sex. But here's one that amused me:

So that's all for the examination of sex in Eisner's work. Come back tomorrow to see his depiction of a closely related subject. I bet you can guess what it is!
-----

You have to call them "dames" when you're talking about The Spirit. 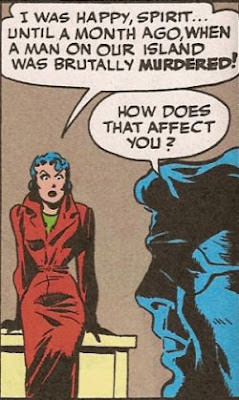 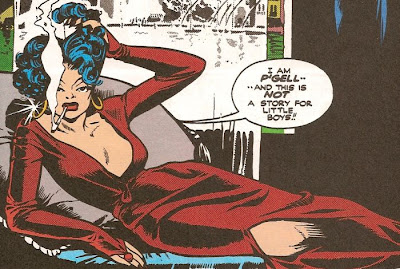 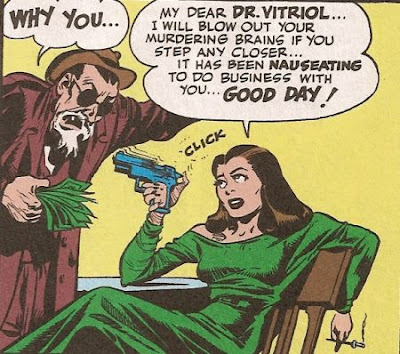 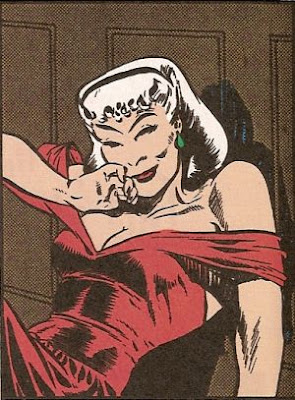 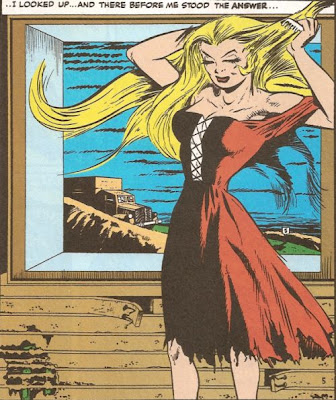 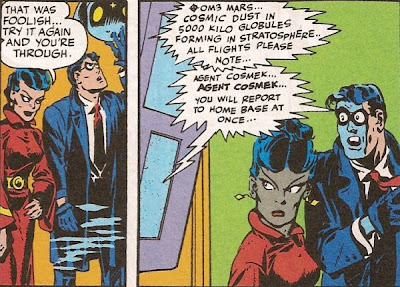 Autumn Mews, who tries to discover the Spirit's secret identity: 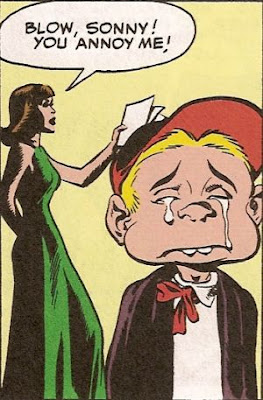 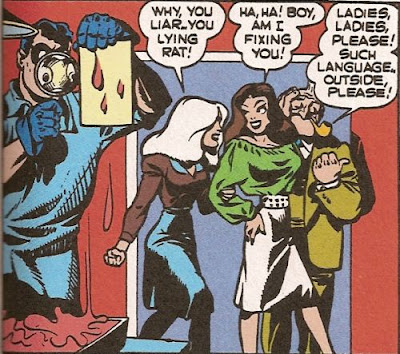 You can actually see the silhouette of these two ladies fighting in the background of one of the panels from yesterday.

And, lest you think the only women in The Spirit are femme fatales (femmes fatale?), here's his love interest, Ellen Dolan: 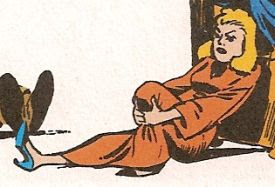 She's not normally so grumpy.
Posted by Unknown at 8:56 PM

Email ThisBlogThis!Share to TwitterShare to FacebookShare to Pinterest
Labels: artcomix, comics, The Spirit, Will Eisner