Sorry to interrupt the themed content so soon, but I'll go ahead and do my regular Monday preview of

Like I've been doing lately, I've been getting the list from Chris Butcher's site, so thanks, Chris! I would recommend checking out his post, since he highlights several comics which I wasn't aware of.

This is a minicomic, I guess, by Danica Novgodoroff, and it looks really nice. I have no idea if my store will get it. You can check out samples on her site here. I think I first heard about her on First Second's blog.

Ah, this awesome series finishes. I've been really digging it, so I hope it ends well.

I enjoyed the first issue of this series, so hopefully it will stay good. I expect the "action" to pick up somewhat, but who knows, we might just get low-key comedy. Go Ennis!

I'm not sure what this is, but I like M.C. Escher. I'm sure I'll take a look at it if I see it, but who knows if it's worth buying?

Chris says this looks pretty great. It's by Brandon Graham, and it's from Tokyopop. Might be worth checking out. Oh, and according to Chris, it's direct market exclusive, so you won't find it at Borders.

PIRACY IS LIBERATION VOL 1 INFORMATION WANTS TO BE FREE 13.95

I don't know much about this, but I like the title. Here's the cover, courtesy of midtowncomics.com: 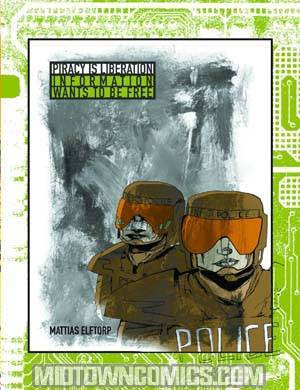 I liked the first issue of this mini. Now if only I can find the first mini and get caught up...

I don't think I'm going to continue getting this series. It's somewhat amusing, but I'm just not really interested in this sort of thing right now, especially given my growing distaste for mainstream Marvel. I'll flip through it in the store and see if I see anything that makes me want to get it, but there probably won't be anything.

I'll defer to Chris's judgment again; he says this is an important manga, about the aftereffects of the atom bomb on Hiroshima. I'll take a look if I see it. My shop doesn't stock much manga, so I usually check them out at Borders.

I've been thinking about trying to catch up on this series, since I've liked what I saw of it, especially Ben Templesmith's art. Looks like the first collection is out, but it seems kind of expensive (which tends to be par for the course for IDW). Maybe.
-----

That's it for Chris's list, which is sometimes a little different up there in Canada, so he might be missing a couple things. According to Midtown Comics and Diamond's pre-list, we've also got:
I love the Franklin Richards specials, and the cover of this one is great. Should be fun.
-----

Plus, I don't see it on any lists, but Adam Warren says his "sexy superhero comedy", Empowered, is coming out this week. I'll have to look at the official Diamond list when it's released tonight and see if it's on there.

UPDATE: I just read Warren's latest entry, and he says Empowered has been delayed again, but it will definitely ship on March 21st. That'll teach me to do my research.
-----

So, kind of a light week, which is nice after last week's backbreaking haul. I'm in the middle of Will Eisner Week here, so I don't know if I'll review any new comics, but maybe I'll get to them next week or something. If I feel like blogging about any of them. Stay tuned and find out!
Posted by Unknown at 9:08 AM