By the way, thanks again to Chris Butcher for the shipping list. I also stole the image below from him. Hope he doesn't mind.

Ah, it's about time this showed up. Hopefully it will start coming out a bit more regularly. I liked the first issue, but I hope it kicks into gear now.

This one finishes the first story arc of the book. Now, can someone answer me this question: Are the stories in this comic related, or just short stories with a similar theme? Just curious. The last issue was very tense, and ended on a cliffhanger, so I'm excited to read the resolution. I bet it won't be a happy ending.

Whoo, I wish I could afford this. I've read Miller's run in the Daredevil Visionaries collections, but it would be cool to have it all in one huge volume like this.

I thought the first issue of this was pretty good. Looks like I'm hooked.

Oh, snap! I can't wait to read this! Jones already has a review up, so I'm guessing it's already out in bookstores. I'll have to look for it.

Another one I wish I could afford. Although, while I would like to read these, I don't know if I would necessarily want to own them, so I should look for them at the library. I'll make a mental note.

This was a really good story, so if you haven't read it, check it out. Plus, the trade has an awesome cover.

This is an anniversary issue with some guest artists and such. I can't find information on who exactly will be contributing, but I'll be buying the book just for Paul Pope's Human Torch/Spider-Man story. Check out this colored version of the image I swiped from his blog a while back: 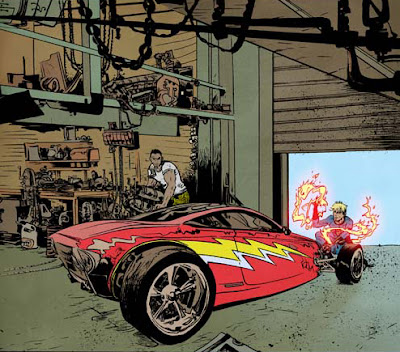 This was a darn good miniseries. Good Ennis storytelling, with the old soldier/rumination on violence that he does so well. Plus a wish-fulfillment (for some) ending that's fairly shocking. I recommend it.

Well, I bought the first issue of this, and it was kind of interesting. I would like to see an Ennis-written, supernatural western, but it just kind of introduced the main character and threw out some philosophy about the Civil War and racism. I might get this to see if it gets better (not that it was bad, just "meh", and Ghost Rider is a hard sell for me anyway).

Ooh, sweet! This comic has been awesome. I meant to review the last issue but never got around to it, so maybe I'll do a two-issue mega review! Hot-cha-cha-cha! (I was trying to sound Adam Warren-ish there, but I don't think I succeeded).

The new book by Jason, whom I've heard a lot about but never read any of his stuff. Jog liked it, with the qualification that it's definitely not his best work. Maybe I'll check it out.

This "Marvel Zombies" series has been so stupid, but apparently it's sold well, so they're going to milk it for all it's worth. The Army of Darkness crossover sounds like another stupidly funny idea, so I'll halfway consider getting it. But probably not.

Well, I'm not sure if this will finish the first story arc, or who will be doing the art. I've enjoyed the book, and I doubt that will change.

Well, I've been waiting for this for quite some time. My guess is that it will be good. Just a hunch.

Awesome. The first issue was great, and I bet this one is where the action really picks up. Go Jeff Smith! (By the way, what was the deal with the biggest debate point online being the nature of the Cap/Billy relationship? I'm not exactly a Captain Marvel fan, so I really don't care. But it seemed like every discussion I read was about whether Cap was a grown-up Billy or a separate entity. Weird.)
-----

Whew, that's a lot of stuff! I have a few TPB's I want to buy, but I'll probably have to wait after this deluge. But hey, no use complaining about buying good comics, right?
Posted by Unknown at 1:40 PM