There was other stuff, and I might make a mention of some of them, but here's what I'm going to focus on for now: 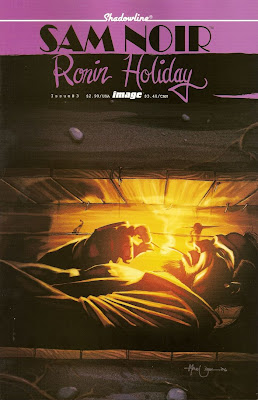 Man, this comic is tons o'fun. I'm glad I decided to pick it up; now I'm hooked. Last issue ended with Sam about to get buried alive, and this one starts with a goofy dream sequence in which he imagines himself as a suburban father of 15. It's pretty funny, and quite jarring, as it's drawn in stark black and white, without the moody shadows that fill the rest of the book. Plus, it's another example of the book's goofy setting, which blends 19th century characters like samurai and pirates with some more modern "furniture". It's pretty wild. Of course, Sam digs himself out of his grave, with a great line: "Being buried alive just sets you up for a great night's sleep. It was time for Sam Noir to rise and shine." That's followed by this touching reunion:

He then gets to confront the voodoo priest, and ends up fighting another character who has been zombified (I won't spoil who, but if you've been reading the book, you can probably guess), then finds out who is behind the scheme to kill him. It probably makes a little more sense if you've read the original miniseries (I got the collected version this week (yay!), but I haven't read it yet), but it doesn't matter that much. In the end, we get a setup for the next Sam Noir series, which looks like it will see him hunting his foe in America. Sweet! I can't wait.

As I mentioned, it's a super-cool book, with over-the-top dialogue reminiscent of both samurai movies and Chandler-esque detective novels. It's great stuff. The art is cool, filled with noir-ish shadows, and Trembley choreographs the fights excellently. Good stuff. Keep up the good work, guys!

Bonus! The back cover ad for Manny Trembley's next series, Sara Pumpkinhead: 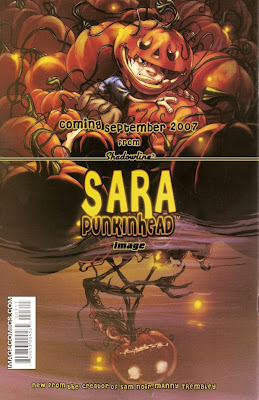 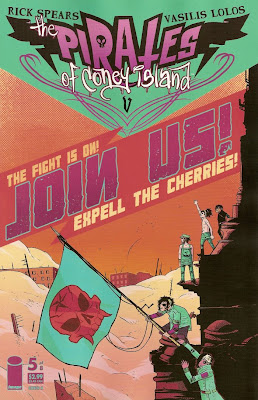 Whew! This is one fucked-up book. We get an introduction of a new character, known previously to the Pirates as Cadillacula. He's a murderous, be-mulleted fellow with an awesome car that never seems to come out during the day. A couple of the Pirates stumble across it and decide to steal it. I expect we'll see some consequences for that action in the future. We also see the Pirates and the Cherries recuperate after their fight last issue. The Cherries do so by having a pajama party, giving each other makeovers and talking about which of the Pirates they think are cute. I'm still wondering about the gender issues in this comic, but it's obviously not the point. We also get further Pirate/Cherry confrontation, as the Pirates run down the Cherries' car and chase after them on foot. Patch ends up confronting Trish, who previously cut his eye out, and their ensuing fight is even more brutal than the fighting last issue.

But there's a twist! A fucked-up one at that. I won't spoil it though; read the issue! 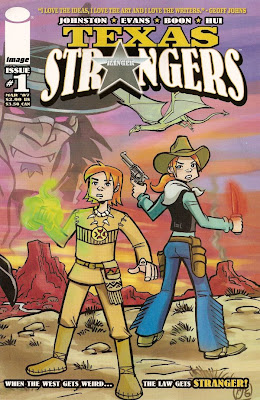 I told Antony Johnston a while back that I would review this when it came out, and here it is, finally. Here's the concept: it's an alternate past, with the history of the United States influenced by magic. The Native Americans are actually elves, and Mexico is full of orcs. The United States covers the northeast part of the continent, and the southeast corner, Louisiane, is controlled by France. In the middle of all this is the Free Nation of Texas, maintaining its independence and patrolled by the Texas Rangers, which, due to their magic-using nature, are known to most as the Texas Strangers. And we have a title! The story concerns two orphaned children in possession of a magical knife that they need to return to where it came from. We don't have much backstory yet, but I'm sure it will be revealed. The kids have a run-in with some thugs in a saloon, and they're bailed out by two Rangers, an elf and a Scottish ogre. Later, they run into a third, named Rick Blackwell. They get entangled with the bad guys again, and end up on a wagon train full of dynamite, giving us a cliffhanger.

It's a decent story, although I'm more interested by the various Rangers than the main characters. Here's the back cover, which shows a few that haven't been introduced yet: 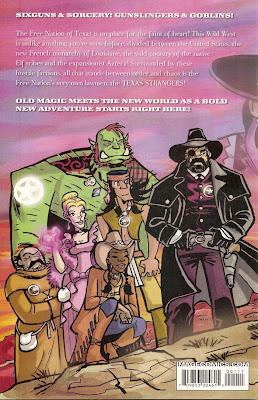 Maybe the kids will end up interacting with the whole team more often in the future. It's a perfectly pleasant book, with clean art (although I don't especially like the squarish faces that Boon draws on the children) and a fun concept. Hopefully the creators will develop it further. I'll give it at least another issue or two.
-----

Okay, that's it for tonight. Maybe some more tomorrow.
Posted by Unknown at 10:06 PM