So here's the natural follow-up to yesterday's post. Violence was another subject that Will Eisner depicted regularly. He wasn't afraid to shy away from the uglier aspects of human existence. Let's look at his portrayal of violence throughout The 'Contract With God' Trilogy: 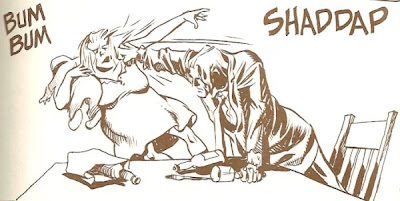 This is the street singer from A Contract With God. Before this scene, we might have thought of him as a sort of romantic figure, using his vocal skills to earn whatever meager pay he can, and not above a roll in the hay with one of his female fans. Here, he is revealed as a drunken deadbeat who won't get a job to support his family and physically abuses them when they complain. Eisner says in his introduction that he remembered street singers in his youth, and this is his imagination of what their life might have been like. Not very pretty. 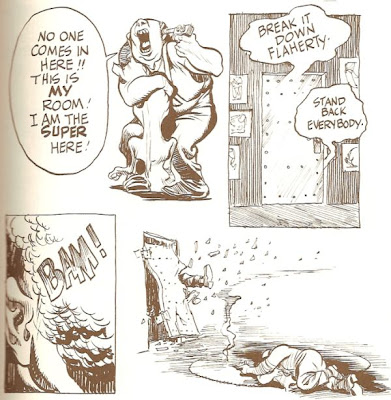 Here's the ignoble end of Contract's super, after he was seen threatening a young girl. It's what his sad, lonely life led to: suicide in the arms of his only friend. 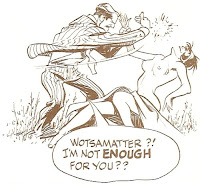 (Warning! Full-size image is NSFW). This is the woman who seduced young Willie in yesterday's post, after being found by her husband. 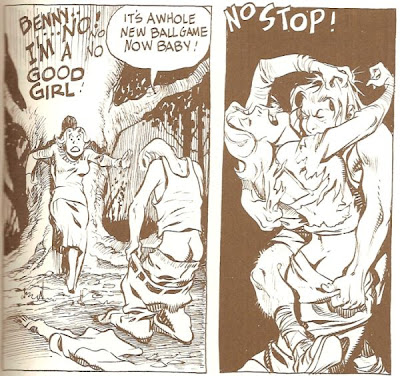 And here's the young "lovers" after they discover that neither of them is rich and the girl refuses to put out.

So, A Contract With God, in keeping with Eisner's envelope-pushing adult themes, depicts domestic abuse, suicide, and rape. As I mentioned before, he's trying to write mature subject matter, so the book is full of the kind of stuff that wouldn't normally have been depicted in comics. It was a bold move, if a bit rough in plot and dialogue, but he would refine his storytelling in later works.

A Life Force doesn't have as much violence, other than the mobsters who casually rough up guys around the neighborhood, and most of that is implied. But there is this superb scene where the young would-be gunfighter discovers the result of the gangster's activities: 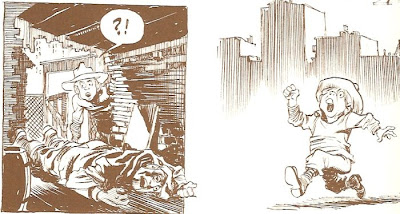 The part of the trilogy that is especially violent is Dropsie Avenue, which makes sense, as it is an examination of the history of the neighborhood, and American history is fraught with violence of every kind. Eisner shows us that Dropsie Ave. was a violent place right from the beginning, as we see one of the Dropsie brothers kill the other one, who had drunkenly set their fields on fire, causing the first brother's daughter to die in the flames. 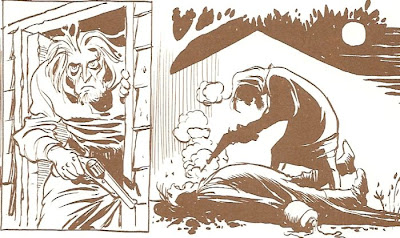 In fact, the burning of the fields is apparently what allowed the neighborhood to be built, meaning Dropsie Avenue was born out of violence. 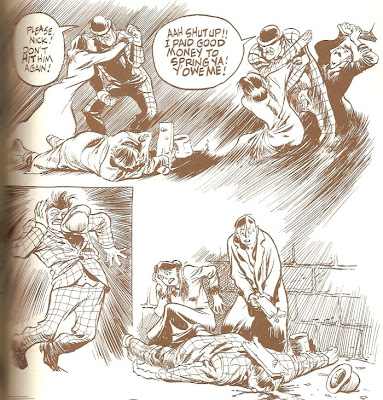 This is what resulted after the girl in this scene was disgraced. Sex led to banishment, prostitution, and eventually murder. Eisner depicts the young man's shocked reaction to his own actions beautifully here. 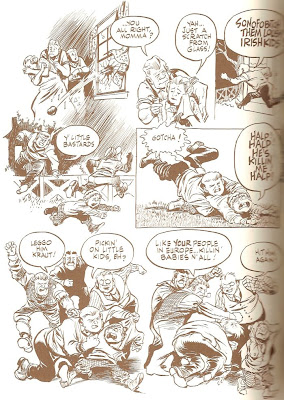 Here's an interesting reversal for Eisner: This family is being harassed for being German (it's right after World War I), and the crowd will take any excuse to beat the tar out of him and chase them out of the neighborhood. 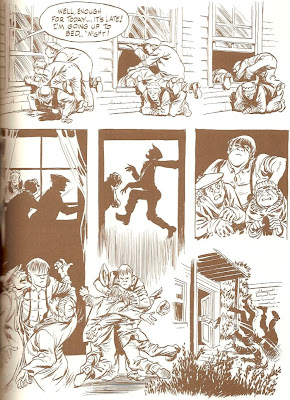 This scene is more on the humorous side, as a man defends his house Three Stooges-style against burglars. 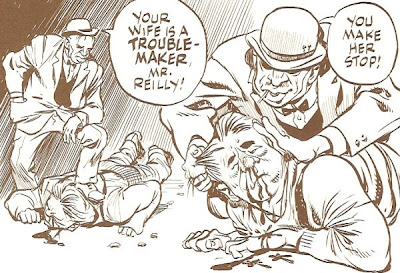 Here we see some mob violence, as the protestations of this man's wife (seen in this scene) are a threat to their liquor and prostitution rackets. In the next scene we find out that the wife ended up "falling" off a roof. 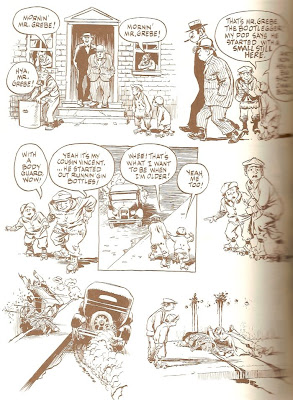 This is a beautifully-done scene, as two kids see the negative side of the romanticized gangster lifestyle. 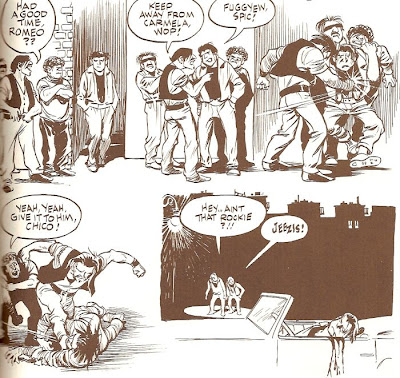 Eisner covers a lot of the causes of violence in the neighborhood. This one comes from racial tensions. In fact, there is a lot of racial strife throughout Dropsie Avenue; it's interesting to see the competing factions shift over the course of time. The scene here leads to a street fight: 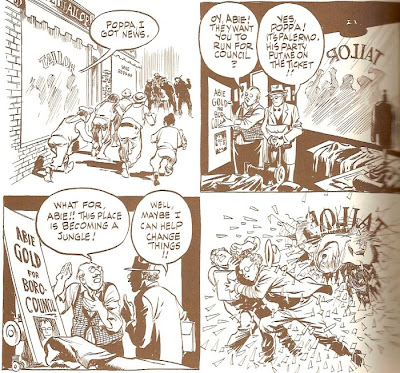 This is another very well-done scene, as we see the beginning of the conflict in the first panel. Then two characters talk about violence entering the neighborhood, just as it literally comes crashing into their laps. 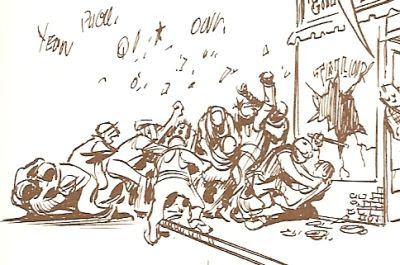 And I love how on the next page Eisner depicts the brawl as a pile of guys pounding on each other. It's a good example of the effectiveness of his exaggerated art. Another example can be seen later in the book, as the police are hauling in the participants of yet another street fight:

Eisner was great at depicting chaotic situations in this manner. 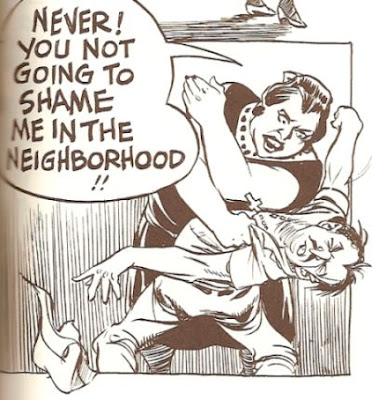 Here's some domestic abuse from a different viewpoint, with the roles reversed from the norm. This scene leads to my favorite gag in the book, but I'm not going to ruin it here; you'll have to read it to find out. 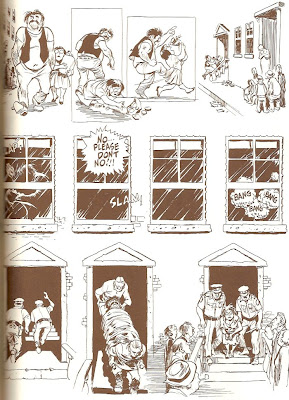 We get more domestic violence here, and we're put in the role of the neighbors watching the situation from the outside. We see the deplorable way the man treats his wife in public, then get a hint of what happens in their apartment that night (it's reminiscent of Rear Window). We only get a confirmation when the police haul the couple out the door in the morning. It's another example of the voyeuristic state that Eisner places the reader in. 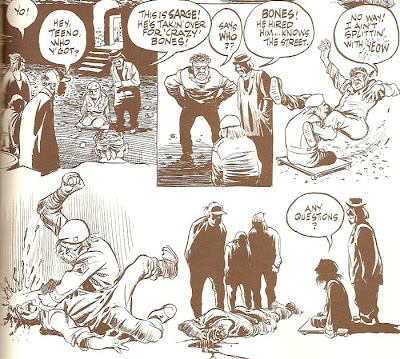 Finally, we see poor Sarge, who lost his legs in Vietnam and is reduced to acting as an enforcer for a drug dealer. 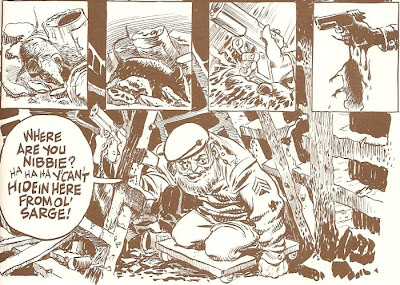 Like the neighborhood itself, he was once proud and upstanding, but has been reduced to a lowly state. Here we see him chasing a druggie through the remains of the last building on Dropsie Ave. It's pretty sad.
-----

So that's it for my look at violence. I think I'll be able to squeeze one more post out of this, so come back tomorrow for the finale.
Posted by Unknown at 9:11 PM