Alice in Sunderland: My fragile mind has been sundered

Once again, this might not be too coherent. But what are you gonna do?

Alice in Sunderland
By Bryan Talbot 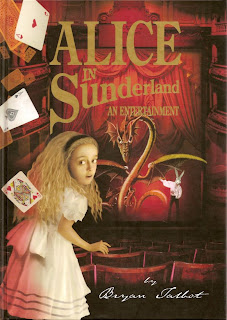 This book is crazy; it's just packed full of information, and it's enough to make your head swim just trying to keep up with it. And it's certainly a strange idea for a comic: Bryan Talbot gives a tour of his hometown of Sunderland, England, focusing on its historical importance, but especially its connections to Lewis Carroll and his books, especially Alice in Wonderland. Who knows what gave Talbot the idea to do something this bizarre, but it works pretty damn well, probably due to his skill as an illustrator and graphic novelist. Not to mention his sense of humor; he makes it a pretty enjoyable experience rather than just a barrage of facts. But I'll get to that later.

The book is presented as a performance at the Sunderland Empire, a famous theater in the area. Talbot, in an apparent effort to make this as solipsistic as possible, casts himself as both the performer: 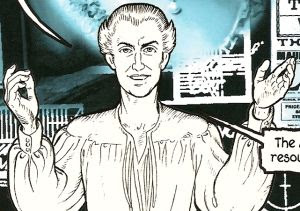 and the sole member of the audience:

Then, in an especially "meta" move, he introduces a cartoonist version of himself who is drawing the whole thing:

This version eventually gets dubbed the "Pilgrim", as he walks out his front door and spends the book giving us a tour of modern-day Sunderland. The Performer mostly sticks to the past, but that's not always the case; sometimes they "switch roles", as it were. But together, they give us as complete a view of the area and its history that they can. Most pages are collages of pictures, with information in word balloons and occasional appearances by one of the Talbots (sometimes making use of a pointer). Here's a typical page: 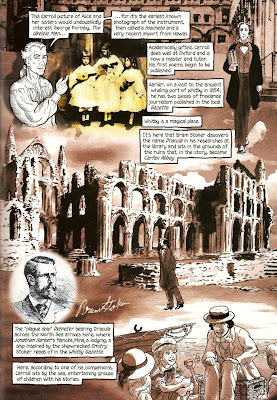 It's hard to choose a good example, since most of the book looks like that. Sometimes the images in the collages reproductions of historical illustrations or old photographs, others are Talbot's drawings or landscape photos that have been run through a Photoshop filter. It's all very nice-looking though, demonstrating Talbot's skill at collage and at conveying information. At times it gets a bit tedious, with tons of facts being thrown at the reader. But Talbot seems to understand this, and he seeks to liven up the "performance" by doing some short comics, usually adaptations of stories. Early on, he does a hilarious Mad Magazine-style adaptation of the "Once more unto the breach!" speech from Henry V: 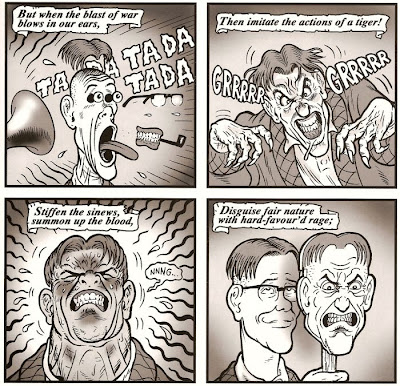 Those panels crack me up. In other places, he adapts Lewis Carroll's poem "Jabberwocky", or presents the story of Jack Crawford in the style of British boys' adventure comics: 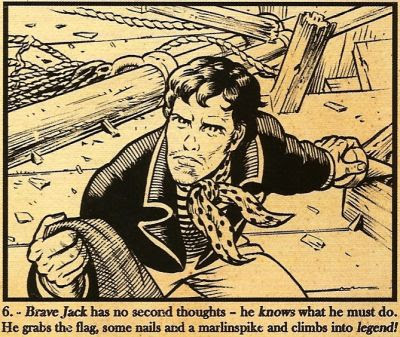 And plenty of other breaks in the main "narrative", including bits in which audience-Talbot (or the Plebian, to go along with the Performer and the Pilgrim) heckles the Performer. Or a scene that I've heard talked about on other blogs, in which the real-life Talbot wakes up and wonders what he's doing spending years of his life making this comic for which he seems to be the only audience. But then he's visited and reassured by the spirit of Scott McCloud: 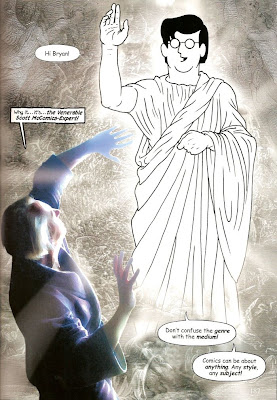 That cracks me up every time. Another bit that I liked was the Tintin-style depiction of a trip Talbot took to Morocco:

There's lots of stuff like that, and it's all very interesting. But so is the main content, whether about the history of England, ranging from the stone age to the present (Talbot's depiction of the Norman Conquest is especially cool), or about the life of Lewis Carroll and Alice Liddell, his muse and inspiration for the famous character, or about the current geography of Sunderland and the surrounding area. One of my favorite bits was the Pilgrim's tour of a "sculpture trail" in Sunderland's port, accompanied by the artist who designed it and his collaborator, the area's "crimewriter-in-residence". I loved seeing the artwork and hearing the artist's descriptions of their intent. And this 3-D "realspace" comic strip sculpture is really cool: 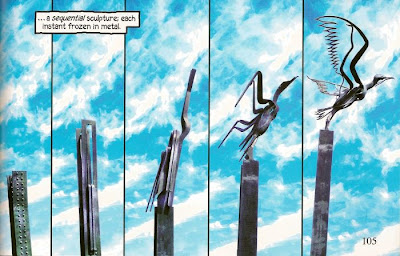 It made me want to go visit the area if I'm ever in England. Well done, Talbot.

So it's an incredible experience, and kind of a trip through Talbot's head. I thought the ending was kind of strange though (the first one, that is). In an odd shift in tone, Talbot talks about the political opposition to immigration, both current and historical, and how it's ridiculous. It seemed like he was trying for a moving ending to his tale. Luckily, after we're presenting with a "The End" page, audience-Talbot complains, mocking Talbot's self-seriousness. This leads to the real ending, with a fun summary of the real themes of the book.

But even if it seems to drag, and might get slightly dull in places, it's a hell of a read. It's a huge book, 11 x 8 inches with over 300 full-color pages, well worth the money spent (especially since I got a significant discount on Amazon). And libraries are always an option. So I say check it out, since there aren't very many comics like it. Talbot is one of the modern masters of the form, and it's cool to get a tour of his obsessions. Now I just have to pick up Luther Arkwright...
-----

Whew, that was a crazy one. More reviews to come, but probably not until tomorrow.
Posted by Unknown at 7:13 PM