The Black Diamond Detective Agency: or, Eddie Campbell Is Awesome

It seems like this book is getting some mixed reviews, maybe due to the fact that it's kind of different from some of Campbell's previous work. But I for one loved it, so let's see if I have anything coherent to say: 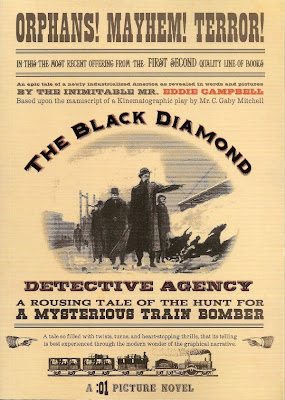 This is actually an adaptation of a screenplay by C. Gaby Mitchell, and I'll be curious to see how the possible film differs from Campbell's version of the story. It takes place at the end of the 19th century in the United States, telling about a man with a mysterious past going on the run after being framed for bombing a train. He is pursued by the titular agency, and even joins their ranks in disguise at one point to try to capture the real culprits. It's a fun, fast-moving story, with lots of action and adventure, and it's given a dirty authenticity by being depicted in Campbell's unique style. And I think that's what I want to talk about: the cool touches that Campbell brings to the story.

Let's start with the cover. I love the old poster-style layout, and there are some good jokes that come from such an old style being used on a modern book, like the line, "A tale so filled with twists, turns, and heart-stopping thrills, that its telling is best experienced through the modern wonder of the graphical narrative." The inclusion of "Orphans!" is apparently a big selling point, getting equal billing with "Mayhem!" and "Terror!" That's pretty amusing, to me at least.

But let's get into the actual content of the book. I like the little touches that Campbell provides, like depicting the main character with the walls of the building he's in cut away to reveal his surroundings: 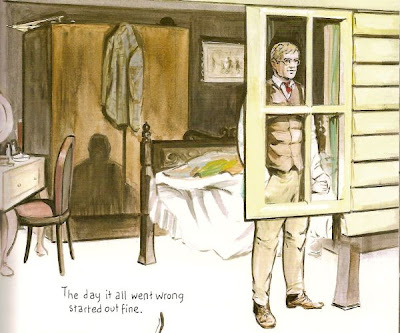 That's a cool effect. Or the way small details in the art are pointed out through captions or little magnified boxes: 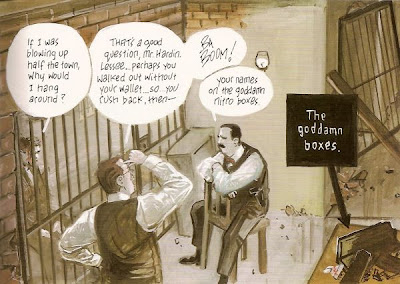 And the use of the color red is wonderful in depicting violence (blood, sound effects) or strong emotions, but especially in the oft-seen double page spread (which I noticed is upside down on the page of Wizard's interview with Campbell) of the train bombing and characters' remembrances of it. There's a lovely bit in which the main character (he goes by at least three different names in the book, but I'll call him Harte) enters a room in the agency and sees a red-tinted image of the wreckage covering the wall. But on the next page we learn that the red was only in his perception; it's actually a composite image from a bunch of different photographs.

There are several silent sequences that are beautifully done, but my favorite was probably the one immediately following the bombing, with the absence of word balloons simulating Harte's loss of hearing. There are some other action scenes that are mostly silent, told through character movement and panel layouts. There are a couple of double-page spreads of panels in particular that are amazing, with several "paths" of small panels interconnecting to create an entire scene. I'm having trouble describing it (and I don't want to spoil it by just scanning the page), but trust me, it's pretty awesome.

That leads me to the panel layouts, which are also beautifully done. Campbell has a real skill at leading the eye across the page through the placement of word balloons and characters. But even wordless panels are beautifully done: 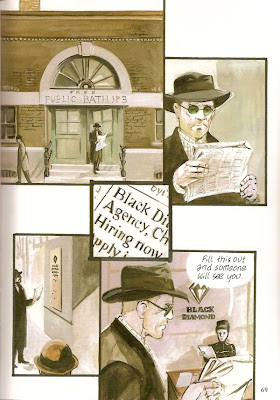 I love the simplicity of that page, and the way the eye is led in a Z pattern across the panels, with the angle of the text in the center panel leading you to from the upper right to the lower left. Sure, we know that's where our eyes are supposed to go anyway, but this elegantly facilitates the process. And I like how the "Black Diamond Detective Agency" sign is shown in the lower left panel without much detail; we can identify it instantly due to the diamond shape on the sign, but our focus is on Harte as he is looking at it.

And then you have the action scenes. With the square panels providing a rigid structure through most of the book, Campbell provides a visceral, disorienting depiction of the chaos of a shootout by angling the panels and distorting them into weird shapes: 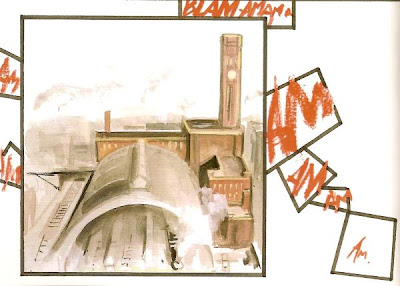 I didn't want to spoil the main scene, so I went with that exterior shot; I think it still illustrates my point pretty well. I've seen that effect quite a bit (Joe Sacco does it especially well), but I really like the way Campbell pulls it off.

And finally, the locations are beautifully illustrated. I mentioned one nice panel a couple days ago, and there are plenty of other examples of buildings and landscapes that just take your breath away: 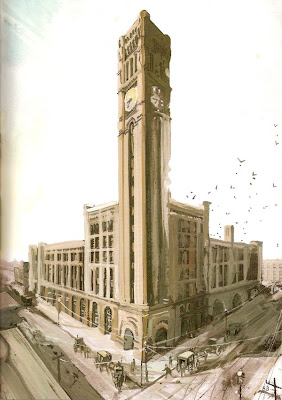 Wow. So, it's an excellent book, and I highly recommend it. Lovely art, good writing (I didn't even mention how funny much of the dialogue is), a great package. Check it out!
-----

I have at least one other book to review, but I doubt I'll get to it tonight. There's always tomorrow!
Posted by Unknown at 8:47 PM