UPDATED: Links of the rarebit fiend

I moved this up to the top of the page because I added a new link at the bottom of the post. Take that, space-time continuum!
-----

I might come up with something else to link, but I wanted to point out this book that I only first heard about today (found via Tom Spurgeon). It's a complete (sort of) collection of Winsor McCay's Dream of the Rarebit Fiend comic strip, which I've heard about before but never read. It's kind of an adult version of his Little Nemo in Slumberland. Anyway, this hefty and expensive ($114!) book is 464 pages long, with lots of commentary about the background of the strips and McCay's life and career. Plus, it includes a DVD with hi-res scans of all 821 extant strips and "a 600 page WORD file with a catalogue raisonné of all episodes, containing a vast array of information about the individual episodes, including chronological strip numbering, original publication dates, later reprints, whereabouts of the original artwork, inspirations used by Winsor McCay, later quotations taken from this strip, and historical background information, & the complete text of the printed book." Oh, and "the surviving fragments from McCay's animated film Gertie on Tour (c. 1918-1921)." Wow, that's a lot of stuff. I wish I could afford it, but maybe I can try to get a local library to order it. If you're interested, the site has some samples from the book, from both the text material and the actual strips. They're a hoot; I haven't read too much McCay, but judging by this sample, I really need to check out more of his stuff. Here's a strip I dug, with a character interacting with himself by reaching across the gutters into adjacent panels: 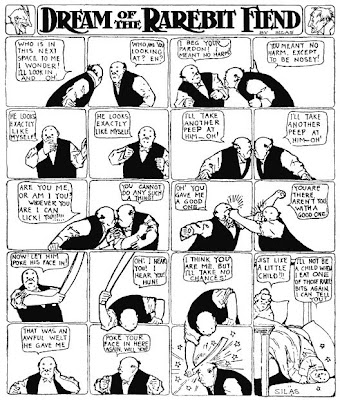 Other links: Check out the images from this Hulk Hogan manga! (I think I also got this from Tom Spurgeon).
-----

UPDATE on 6/14: I don't believe it's been officially announced, but it looks like The Plain Janes is going to get the sequel I was hoping for. Cool.

I've probably linked to her before, but I've been digging her stuff lately, and I don't want to look like I'm slacking off with my linkblogging. Shaenon Garrity keeps chugging along with her Overlooked Manga Festival entries, focusing today on the back-cover text she wrote for Ultimate Muscle (which is a manga series I've never read, but I've seen some of the anime adaptation on the Saturday morning cartoon block; it's hilarious). She also recently did one on Junko Mizuno's Pure Trance. I've been wanting to get that one (or any other Mizuno stuff, really) for a while. Plus, she's started reviewing videotapes of Star Trek: The Next Generation while drinking wine, with highly enjoyable results.

And here's a nasty adaptation of a Bible story. Surprisingly, it's written by Neil Gaiman. Not safe for work!

UPDATE on 4/15: After that crazy Neil Gaiman Bible comic yesterday, somebody on Scans Daily posted an Alan Moore-written story from the same volume. It's pretty funny, pointing out the bloodthirsty nature of the Old Testament laws.