Kampung Boy: Not a member of the Legion of Superheroes

I read this the other day: 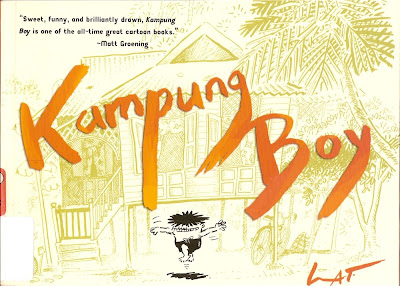 I don't know if I have too much to say about this one, but I'll see what I can come up with. It's an autobiographical book by Lat, a famous Malaysian cartoonist (famous in Malaysia, that is; this is his first book published in the United States). It's a fascinating look at his childhood in a small village (or "kampung", hence the title). I found it to be an incredible firsthand look at a culture Americans don't get to see very often, with people living in thatched huts but still using semi-modern technology (Lat was born in 1951).

The book is more illustrated prose than comics (at least by the Scott McCloud definition), with most pages consisting of text surrounded by pictures (or vice versa): 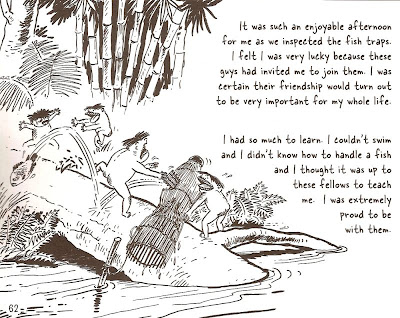 But there are also many sequential bits, so it certainly counts, in my opinion. This next page has two sequential "panels" (and the preceding and subsequent pages are also part of the sequence), and there are several sequences of nearly-wordless full-page illustrations that work as wonderful sequential storytelling. 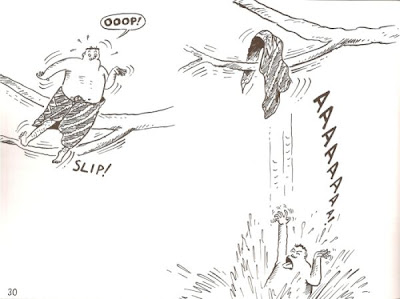 Anyway, why argue about definitions when you've got a beautifully-illustrated story like this one? I love the way he draws the people of the village, with their wide faces and huge mouthfuls of teeth. And how he juxtaposes the bulk of the adults (especially his father, who can be seen falling into the water above) with the tiny figures of children: 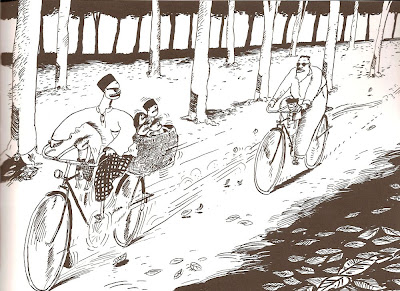 And the sense of motion he conveys is wonderful; in possibly my favorite page, he seems to leave jet trails all over the village as he's trying to escape punishment: 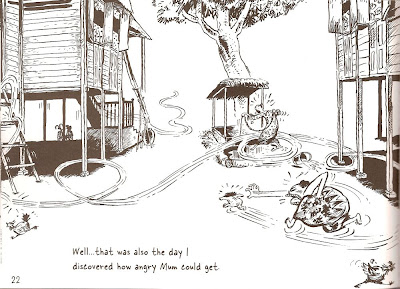 So it's a highly recommended book, if a bit quickly finished (I read it in one sitting). I'm very interested to check out the soon-to-be-released (in the U.S.) follow-up, Town Boy.
-----

That's probably it for tonight, unless the urge to write strikes me. More tomorrow, I guess.
Posted by Unknown at 5:45 PM