The Lone and Level Sands: Where I'd like to exile this book

That title is a little harsh, but I wasn't too pleased with this bit of comics literature:

The Lone and Level Sands
Written by A. David Lewis
Art by Marvin Perry Mann (or mpMann) 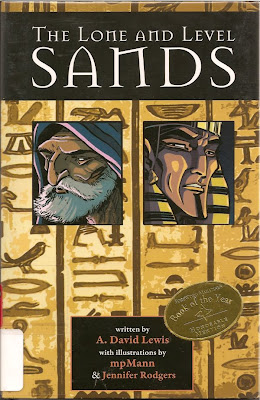 I grabbed this from the library after reading some favorable reviews, such as the one by Greg Burgas over at Comics Should Be Good. Unfortunately, it did not live up to the hype (although that's a strong term for a couple good write-ups). The story is a reversed viewpoint of the Biblical story of Exodus, told from the Pharaoh's point of view rather than Moses'. That's an interesting idea, and I applaud the intent, especially the way Lewis tried (as he states in his introduction) to draw from different sources, including the Bible, the Koran, anthropological sources, and the film The Ten Commandments. And it might have made an interesting tale, except it's so confusingly presented I had trouble following it. For one thing, I had trouble distinguishing characters; when presented with a page of Ramses (the Pharaoh), his son, and his friend/advisor talking, I should be able to easily tell them apart; instead, I get three nearly indistinguishable bald, shirtless guys:

[My scanner's acting up, so I can't scan the page I wanted. Just imagine that it illustrates my point perfectly]

On further examination, I see that Ramses has a sort of "soul patch"-style beard, but that's the only way I can differentiate the characters. The whole book is like that, and having to try to figure out who is who on every page makes it hard to concentrate on the story. The intermingling of captions and word balloons doesn't help either, especially since I had trouble telling who was supposed to be doing the narration. In at least one chapter, Ramses seems to be telling the story to his sick and dying wife, but another chapter features omniscient third-person narration. It's all pretty confusing, and I'm not exactly a comics novice.

And that's just the presentational problems that I found. I also had trouble following the plot, and if I hadn't already been familiar with the story from years of Bible school, I would have been completely lost. I guess the aforementioned movie is famous enough that everyone can be assumed to know the basic story (Israelites as slaves, "Let my people go!", ten plagues, parting of the Red Sea, etc.), but very little effort is made to give any background or even introduce characters. Worse, Egyptian words and place names are used with the seeming assumption that readers are familiar with them. I had never heard of Abu Simbel, but it's apparently supposed to be the location of one of the Pharaoh's palaces, or perhaps some monuments. It's hard to tell. Later, the Israelites are referred to as "Apiru", which I thought might have been an Egyptian pronunciation of "Hebrew". But then they are later referred to as "Hebrews", so I don't know what the former word is supposed to mean. Egyptian for "slave", maybe?

As for the actual plot, we get very few of the important details. We don't get to see most of the meetings between Ramses and Moses, so it's kind of odd when the plagues just start happening. This might make sense if the point of view was supposed to be that of an average Egyptian, but Ramses is supposed to be the central character here. And we don't get any mention of the fact that each of the plagues was a direct attack on the various Egyptian gods. That would have been a nice aspect to include, but it's ignored in favor of mentions that Yahweh, the Hebrew god, is challenging Amon-Ra, the Egyptian god.

Lewis also struggles with the reason Ramses keeps revoking his promises to let the Israelites go. In the Bible, God kept "hardening his heart" and making him refuse to release them, because God wanted to prove his point and get through all ten plagues, I guess. Lewis tries to demonstrate that here by having various characters around Ramses be possessed by God (we can tell they're possessed because they speak in a different font) and insist that the Israelites not be allowed to leave. But why Ramses feels he needs to follow their instructions is not explained very well; you would think he would ignore the freaky words of his grandson if he could stop the devastation being rained upon his kingdom. Lewis seems to be making the point that Ramses is being manipulated by God, and it leads to what would be a fairly effective scene if I hadn't been so turned off by most of the previous storytelling devices.

So, it's a good concept, but a poor execution, in my opinion. I will say that the art is pretty nice, other than the trouble I occasionally had telling characters apart. It certainly doesn't get in the way of the story. It's just the story itself that's flawed. I have to give the book a non-recommendation, I think.
-----

I've got another one to review, so we'll see if I get to it tonight.
Posted by Unknown at 5:58 PM