The Interman: Somebody get Jeff Parker an artist!

I've been trying to think of something worthwhile to say about this book, and here's what I've come up with:

The Interman
By Jeff Parker 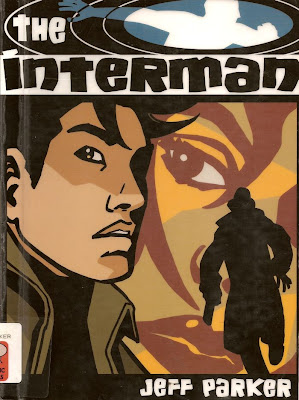 This is a pretty cool adventure story, taking superhero-type concepts and placing them in a realistic world of hitmen and international espionage. The title character is a guy with the genetically-engineered ability to adapt to any situation. If he needs to breath underwater, he grows gills. If he has to survive extreme cold or survive being poisoned, his body develops the ability to do so. He was created at the height of the cold war as a possible weapon against Communism, but the program was shut down and he was raised by normal parents. Now he works doing jobs normal humans wouldn't be able to, but the government has remembered his existence and decided he needs to be eliminated. He ends up spending the book searching for answers to his origins while fending off assassins, and it's pretty enjoyable. I would have expected as much, knowing of Jeff Parker's skill at writing exciting stuff like this.

Unfortunately, Parker also handles the art, and his drawing skills are not as good as his writing (sorry, Jeff). It's not bad, but it's kind of, well, mediocre. There are some exciting chase scenes or hand-to-hand fights, along with visits to scenic locales, but everything seems kind of dull and lifeless. It's really too bad; the story is excellent, and an exceptional artist would have really brought this to a whole new level. As it is, it's an interesting look at Parker's pre-mainstream work (if you can call his current work "mainstream"). It would make a pretty cool movie though, and a sequel with art by the likes of Leonard Kirk or Steve Lieber (who provided some art assistance here) would be welcomed. Or Parker could just keep writing Marvel Adventures: Avengers; I'm cool with that.
Posted by Unknown at 3:09 PM