Re-Gifters: Giving the gift of a kick in the face

Actually, these martial arts are more formal than that, but it sounded cool. Anyway: 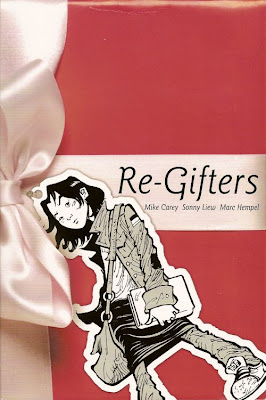 This is the second book in DC's Minx line (which, for those who might not know, is aimed at teenage girls), and it's also pretty good. They're still batting 1.000, in my statbook. I was expecting this one to be decent at the very least, since it's from the same creators as the Vertigo miniseries My Faith in Frankie. Being a Vertigo book, that one is a bit more "adult" than this one, but much of the same atmosphere remains, probably due to Liew's wonderfully expressive art. I love his character designs, especially the way Dixie, the teenage star of the book, and her best friend are so short compared to everybody else: 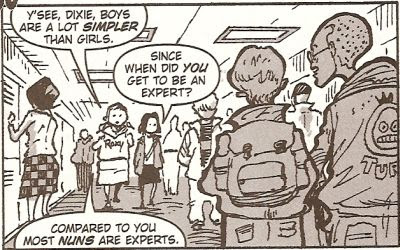 It emphasizes her shyness, but also the way she tends to explode with anger or frustration when she's upset:

I love Liew's cartooning; he gives the characters fairly simple faces, but allows them to convey a lot through big expressions. And he fills the panels with tons of details that seem especially well-researched (probably from Carey's teenage daughter Louise, who, by the way, is collaborating with him to write the upcoming Minx book Confessions of a Blabbermouth): 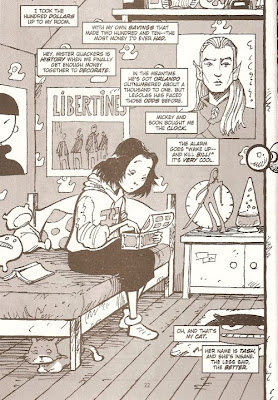 Anyway, here's the plot: Dixie is the daughter of Korean immigrants (read the book for an explanation of the Americanization of her Korean name), and she loves the martial art hapkido, both as an outlet for her bottled-up passions and as a celebration of her heritage. She's been distracted lately, due to a crush on Adam, a classmate and fellow martial artist. But she's too shy to tell him how she feels. There's a lot of teenage drama, with some ill-considered actions that give the book its title, all leading up to the big national martial arts tournament in which she plans to compete. Can she find her inner strength, or ki, in order to do her best and make her family proud?

Well, that answer is probably pretty obvious, but the journey getting to it is lots of fun. There are a bunch of well-drawn characters, from Dixie's best friend Avril, to her stern but loving parents, to her annoying brothers, to Dillinger, the neighborhood bad boy. And the situations seem very real, stuff that regular teenagers would be involved with. Carey writes some good dialogue, and Liew and Hempel illustrate the scenes wonderfully. I found it interesting that they use of sound effects in what I assume is Korean during the martial arts scenes: 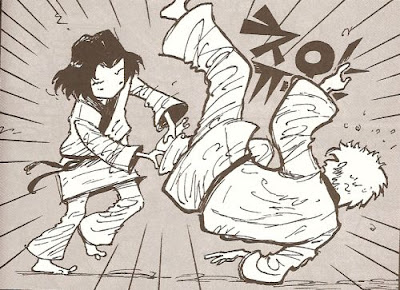 That's an odd choice, but manga readers are used to seeing similar sound effects, so it almost seems natural. If I had to choose one thing I didn't like about the book, it would be that the title and cover design don't really fit the content of the book; the "re-gifting" aspect of the story was pretty minor. It certainly looks nice, and Dixie is striking a character-definingly defiant pose, so it's not completely false advertising, but it is a bit of an odd choice. But really, that's a pretty minor complaint. I liked most everything else about the book. Highly recommended, especially for younger readers; I bet kids will eat this up.
Posted by Unknown at 9:44 PM