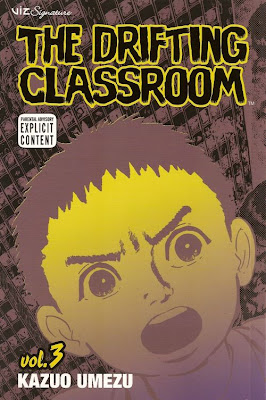 Ever since manga scholar Matt Thorn left a fascinating comment on my review of the last volume of this series, I've seen the book in a whole new light. Rather than just a totally insane horror series, it's symbolic of issues with the educational system of Japan in the 70's. It's added a new level to my reading of the series, so when two kids beat up a third and leave him in the path of a rampaging monster so they can escape, or the leader of a girl gang decides she's taking over leadership of the student body because she has matured faster than everybody else, it kind of blows my mind thinking about the social commentary that Umezu was working into his psychotic tale of children trapped in an apocalyptic wasteland. Sure, being unfamiliar with the culture being critiqued, I barely understand the symbolism, but it fascinates me to see that there is a point to this exercise beyond shocking the crap out of readers like me. I'm not sure what this freaky giant centipede-type monster is supposed to represent though: 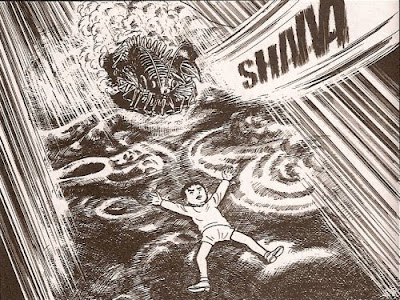 Anyway, I'm surprised at the amount of stuff that happens in this volume. The last one ended with our main character, Sho, about to be killed and somehow psychically connecting with his mother in the past. In an ingenious sequence, she (after freaking out and frantically searching for him in improbable places) manages to send him some help. It's masterfully done. Then Sho returns to the school to find this going on: 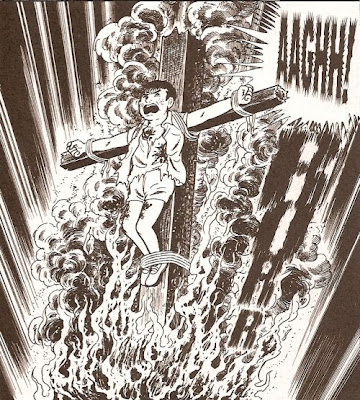 That's one of those "holy shit!" moments that I was talking about in my review of the previous volume. And it's more commentary, since it came about when a rumor started among students that the whole situation was the fault of one bad student that needed to be sacrificed. Yikes. Amazingly, Sho manages to get the situation under control, and it seems like the students are going to work together to survive. Of course, you know that's not going to last; this story is more Lord of the Flies than Robinson Crusoe. So the brief moment of hope is quickly followed by the escape of the last surviving adult, who had previously held the food supply hostage and threatened everybody with a knife: 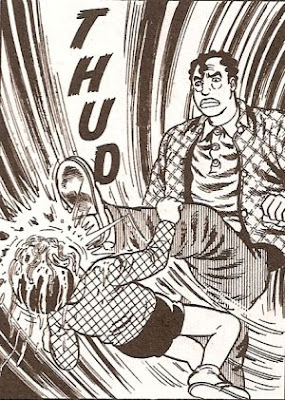 Then there's the discovery of the aforementioned monster (which seems to be on its way to attack the school) and the takeover of leadership by a girl gang, led by a nasty girl who insists on being called "Princess": 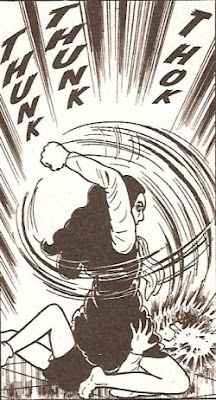 And then more violence, all delivered at maximum volume, of course. Wow, this is a great series. I know volumes 4-6 are all available now, so I'll need to get them as soon as I can. This insanity is going to take over my brain.
-----

More insanity tomorrow, if I find the time and energy.
Posted by Unknown at 9:26 PM