Gyakushu!: Illustrating that revenge isn't always sweet. It can be cold though.

You know, like a dish served? Never mind. This one is a bit more fun than the last book I reviewed: 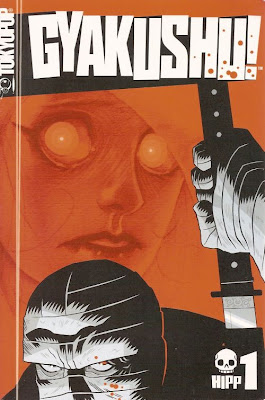 I've dug Dan Hipp's artwork ever since I picked up the first issue of The Amazing Joy Buzzards on a whim. That was a cool series (when's volume 3 coming out, guys?), due in no small part to Hipp's dynamic and goofy art. So when I saw that he went off on his own to do a samurai/ninja-style revenge story in the manga format, I knew I had to check it out. And I'm glad I did' it's pretty awesome.

We get a lot of jumping around in time in this book as we slowly learn the story of the bandaged character on the cover, and how he got that way. We first meet him in a flashback, hanging out in a wheat field with his hot-cha-cha wife and super-cute son: 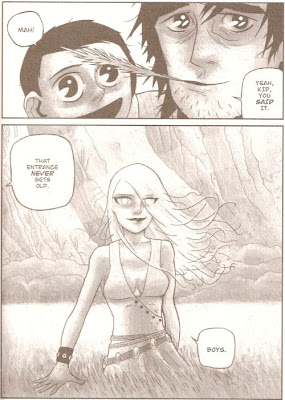 But then we get a hint that tragedy is about to strike, and we jump forward to a confrontation between our protagonist (who is never named, but I'll call him Gyakushu; the word actually means something like "revenge" in Japanese, but for lack of a character name, I think it works), in his bandaged form, and a cannibalistic bad guy with meat cleavers and a smile like the bad guy from Ichi the Killer (the movie version; I haven't read the manga): 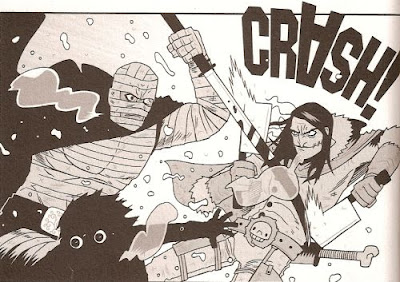 But we don't get to see the resolution of the fight yet; first we are introduced to our piratey narrator (who gives plenty of Lemony Snicket-style warnings not to read the story): 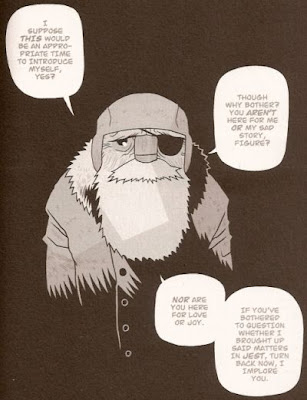 He then proceeds to give us a more complete backstory, telling how Gyakushu was the greatest thief in the world. But he stole a book that enabled an evil fellow to take over all the known kingdoms, and then come to the thief's secret hideout to kill him. It makes for some gruesome stuff, but sets up one of those awesome revenge quests that show up in movies like Kill Bill or manga like Lone Wolf and Cub. There's more jumping back and forth in time, until we catch up to the big battle where we started and set the stage for future volumes. It's pretty fun, with a fast pace that doesn't get boring and a simple story that's easy to jump right into.

The art certainly doesn't hurt; I love Hipp's cartoony, yet detailed style. He pulls off a nice atmosphere here, with flashbacks presented in a soft gray shade and the "present" detailed in sharp, solid blacks. And the character design and "costumes" are also quite wonderful, from the sad, bandaged look that Gyakushu sports (I think he looks like a deformed Counterfifth Detective): 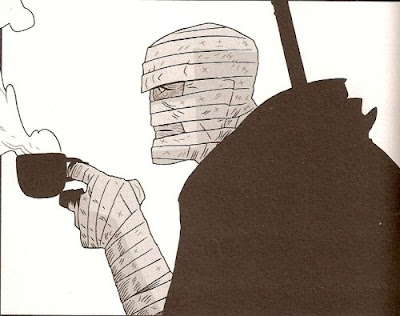 To the skull emblems emblazoned on the evil army (see the bad guy above), to the wild-eyed, bearded visage of the evil ruler: 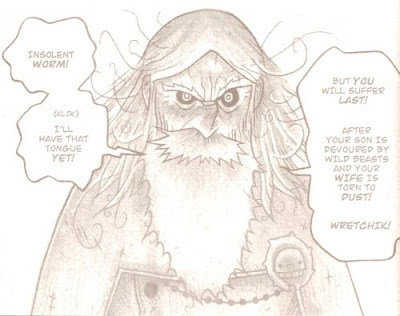 The "world" of the book is nicely designed as well. It might seem like medieval-era Japan at first, but the clothes seem more European (and nobody looks Japanese). Yet they still fight with samurai swords, or variants thereof. The buildings don't look right either, and we also get a glimpse of some monstrous creatures. It's a strange place, but very nicely detailed. Much of this volume takes place in a wintry landscape, which provides some nice settings, and Hipp puts a lot of work into making them come alive. And did I mention how dynamic it is? Since the book is published by Tokyopop, one expects a manga style, but Hipp doesn't just throw in some saucer eyes and speed lines. He uses his own techniques, which may be inspired by manga but are developed for maximum suitability to his art. Take speed lines, for instance. He does use an approximation of the typical technique: 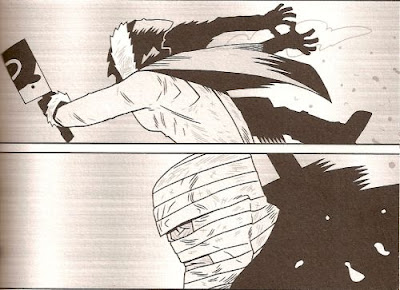 But he also uses different devices, like in this panel:

I love the way the shadows give the same suggestion of movement of speed lines, but help to provide atmosphere. Nicely done.

So, I say check it out. It's a really nice-looking book, with plenty of awesome violence and a story that doesn't ignore said violence's emotional consequences. I think this Hipp fellow is going places.
-----

That's all for tonight. I think I'm busy tomorrow, but I'll have more this weekend, if all goes well. See youse guys later.
Posted by Unknown at 7:00 PM