Dragon Head: Where are the scaly, fire-breathing lizards?

I know, it's not exactly a medieval fantasy; I was just being facetious. I still don't know what this series' title means though. Anyway: 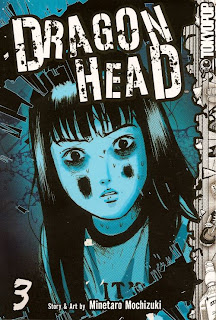 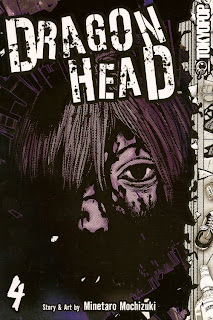 I picked up the first two volumes of this series quite a while ago, but was unable to find any subsequent volumes without an online order, which I eventually succumbed to. It's a crazy series, with kind of a sci-fi/horror atmosphere (I believe Jog called it "survival horror" in his review of the first volume, which originally got me interested in the series), but one that is undefined, for the most part (so far). Maybe all the mysteries of the series will be revealed, but for now, all the circumstances are mysterious. Which creates a very effective feeling of dread, putting the reader in the characters' heads as they are trying to figure out what is going on.

And just what is going on? Here's what has happened so far: teenagers Teru and Ako were returning from a class trip when their train entered a tunnel just as an earthquake was striking Japan. They (along with another kid, Nobuo) were the only survivors of the resulting crash, and they spent the entirety of the first two volumes and some of the third trying to survive inside the tunnel and eventually escape (they also had to deal with Nobuo going murderously insane, but that's beyond the scope of this review, since I'm trying to just stick to the third and fourth volumes). In the third volume, they finally find their way out of the tunnel, but the surface world seems to be deserted, and it's dark even in the middle of the day, with dust filling the air and blocking the sun's rays. They get helped out by some strange kids who are traveling to Tokyo to find out whether the crazy rumors they've been hearing are true. But something seems really odd about them, especially their sacrificial ritual with some dead cattle. They end up leaving without Teru and Ako, leaving our heroes to set off on their own.

As they proceed toward home (and volume four), they face a rainstorm and mudslide, and then find a completely deserted city. It's very surreal, a city that seems broken down and devoid of human life. That is, until a military helicopter lands, and the young soldiers stop to screw around in the deserted city. Once again, the Teru and Ako have to deal with some odd characters, as something seems off about them as well. Their leader is a young-looking kid (although he's older than the two leads, apparently) who is more interested in listening to music and looking at pornographic magazines than doing any military duty. Teru and Ako get separated, and each of them tries to convince the soldiers to take them away, with Teru nearly going mad due to their mistreatment. But then they are interrupted by firestorms that engulf the city and have to scramble to escape. Will they make it? Well, there are several more volumes in the series (the sixth came out recently, and Amazon lists at least eight, with that volume coming out in October), so I'm sure they'll survive. But what will they find on their journeys, and will these strange circumstances be explained?

So it's a crazy series, with tons of unanswered questions, the foremost being, what happened? A nuclear war? Volcano? Alien attack? For such a densely populated country as Japan, the near-complete lack of survivors (or even corpses or animals) is very freaky. And any that have appeared so far have been young; the only adults to appear have been in a TV broadcast, and they were going crazy over the events.

This creepy atmosphere is illustrated very well by Mochizuki, with rubble seemingly covering every surface, and every wall cracked and window broken. 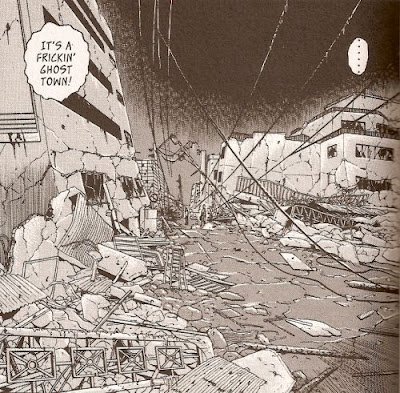 The characters seem to be covered in dirt or blood, as you would expect when they're stuck in underground passages or outrunning mudslides and firestorms. And some surreality is added by the calm attitude of the various characters that Teru and Ako meet. You can see how Teru is depicted as sweaty and freaked out: 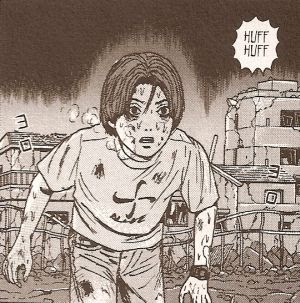 But the leader of the helicopter crew is calm and aloof: 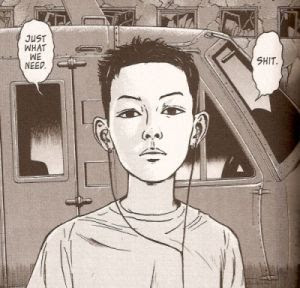 Strange. It might be me, but I think the leads are also drawn with a little bit more detail than the other characters, with more attention given to their hair, clothes, and facial expressions; this really adds to the level of surreality, with the main characters being the only thing about their world that seems real. And there are also some pretty cool action scenes. Volume two had a big fight scene, but the fourth really upped the ante with the fire consuming the city and the helicopter trying to escape. Here's a shot that I dug: 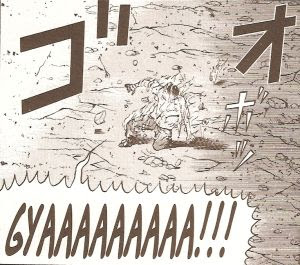 So it's a pretty cool series, and I'm going to have to seek out the remaining available volumes. And then I'll eagerly anticipate the unreleased ones. This damn manga keeps getting me hooked.
-----

Another review tonight? Maybe! But don't bet on it.
Posted by Unknown at 6:14 PM