But really, there doesn't seem to be any other kind, does there?

Deogratias: A Tale of Rwanda
By J.P. Stassen 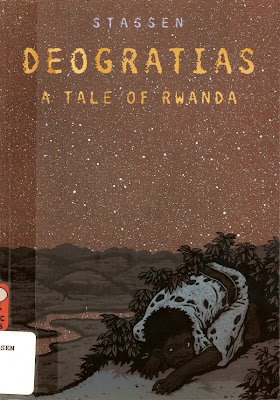 In my somewhat ignorant nature, I knew little of the details of the Rwandan genocide before reading this book. I knew it was horrible, and that involved two warring tribes, and that most of the world stood by and did nothing while it happened, but that's really about it. So being thrust into the story at ground level and seeing the events and repercussions through the eyes of characters who lived through it (or didn't, in some cases) is a shocking and horrifying experience. But it's certainly worth it, just for the perspective it gives to an outsider like myself. Luckily for me, there's an introduction Alexis Siegel, the translator of the book, giving many of the background details to the situation. It's an invaluable addition; without it, I might have been lost trying to figure out the details of the conflict and missed the emotional impact of the story.

And it's a hell of a story. We first meet the young title character, Deogratias (I don't know how it's pronounced; I alternate between "Dee-oh-gratt-ee-us" and "Dee-oh-gracious"), wandering the streets of a village after the "events" with a crazed look in his eyes and clothes in tatters. He's obviously been through something that drove him insane, and while you can guess what it might have been, you get a sickening feeling that you're going to find out. And sure enough, we get some flashbacks to life before the genocide, when Deogratias was a horny Hutu kid with a crush on a Tutsi girl, nigh-oblivious of the fact that his fellow Hutus were gearing up to wipe out the despised Tutsis. It's awful to watch as events begin to build toward their horrifying conclusion, while in the "present" we get more hints to exactly what happened. When we finally get to the reveal, it's devastating, and you can see how it destroyed Deogratias' mind and altered the country forever. 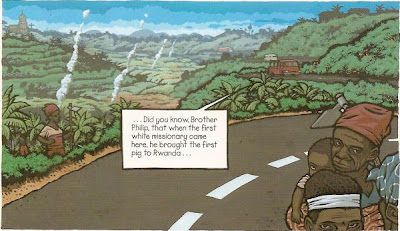 He makes it easy to tell when a scene is taking place by putting a black border around the panels that take place in the "present" and leaving it off in the flashbacks, which I thought was a nice touch. And the colors are incredible, capturing the dusty roads and buildings, the color of characters' skin, and even the yellowish tint to Deogratias' eyes after he has gone crazy. And speaking of insanity, there's an especially effective sequence in which his awful memories cause him to literally turn into a dog (in his own fevered mind, at least): 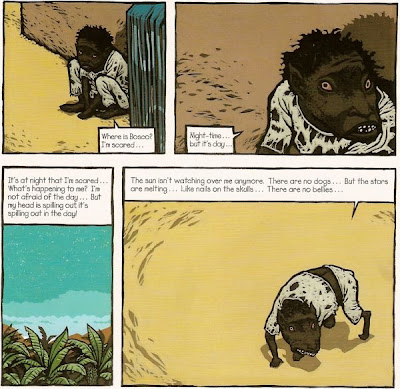 It's some amazing, striking material, and I found it to be an excellent way to get a feeling for the horrible events that happened. I highly recommend it, especially if, like me, you want to learn more about what happened.
-----

One more tonight, so stay tuned.
Posted by Unknown at 6:21 PM