Yeah, I didn't expect so many political books this week. Strange bit of coincidence there. Let's see what we have:

Black Summer #0 (of 7, meaning #7 will be the last issue)
Written by Warren Ellis
Art by Juan Jose Ryp 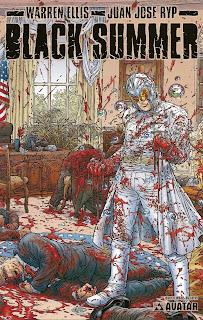 Actually, I'm not surprised about the political content of this one; I've known this was about a superhero killing the President ever since the book was first announced. However, the President in question is obviously George W. Bush, since the reason John Horus, the superhero in question, gives for the "execution" is the illegality of the war in Iraq, the stealing of elections, and the widespread use of torture. It's a bit of wish-fulfillment (since that's what superheroes are for, right?) for those who dislike Bush, but I think (and hope) Ellis is using this fictional act to raise some serious questions. Horus informs the public that he's bringing democracy back and will personally ensure a fair process, but how soon before he is corrupted? And we immediately see the crackdown that begins as the government starts to go after Horus's former superhero allies. Ellis raises a lot of interesting questions and ideas in a short eight pages, and I hope he doesn't drop the ball in the rest of the series. It's a good beginning to what's sure to be a talked-about comic, and I for one can't wait to read the rest of it.
----- 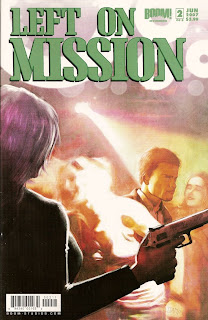 Here's the first surprisingly political book, as I was expecting a fairly standard spy story. In this issue, we find that the information our protagonist was trying to recover from the rogue agent is actually incriminating evidence that the (so far unnamed) President supported torture. Actually, now that I reread the page, it actually seems like a plot point that could have appeared in any spy story from the last 30 years; it just seems especially relevant now because the current administration has taken that same stance. It's not intrusive to the story, but I found it interesting.

Anyway, it's another chapter of spy action, and I think I've been won over by Francesco Francavilla's art. Chip Mosher left a comment on my review of the last issue, saying that he thought Francavilla's art was awesome, and I'm starting to see what he means. There's a sequence in this issue in which Eric, our hero, confronts Emma, the rogue spy, in a nightclub, and he's disoriented by the dance floor strobe lights: 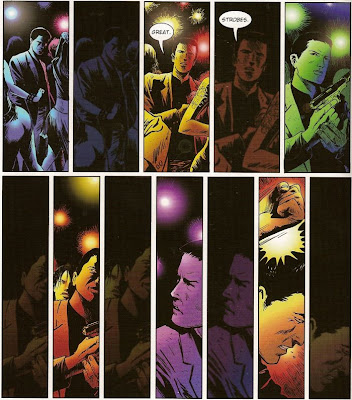 It's a beautifully timed sequence, with nearly-black panels alternating with views lit in different colors; it perfectly captures the situation. Very well done. Another scene sees a character savagely beating somebody, and blood splatters all over the page, even getting in the "gutters" between panels. That was a neat effect, and it really emphasized the brutality of the scene. 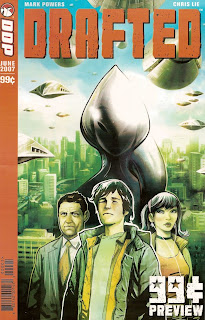 And this is the other political book that I wasn't expecting. Unfortunately, it's not especially incisive, presenting a thinly veiled George W. Bush (the character's name is Preston Walker) who says "Sometimes ... I wish I could just nuke 'em all," when talking about the Israel/Palestine conflict. The idea of this miniseries is that aliens come to earth and "draft" everyone into a war against some other, more conquest-minded aliens. I'm sure the story will eventually have everybody putting aside their differences to fight the threat. Yawn. We don't actually get much story here, just some strange happenings across the globe and a double-page spread of alien ships approaching the earth. There are some sketches in the back which feature some nice-looking designs for aliens, ships, battle-suits, characters, etc., but the excerpt of the story given here is enough to turn me off the series. Too bad.
-----

The Dark Tower: The Gunslinger Born #5 (of 7)
Written by Robin Furth and Peter David
Art by Jae Lee and Richard Isanove 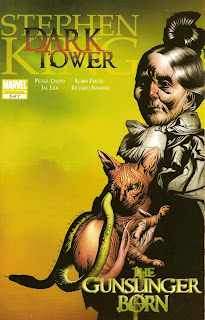 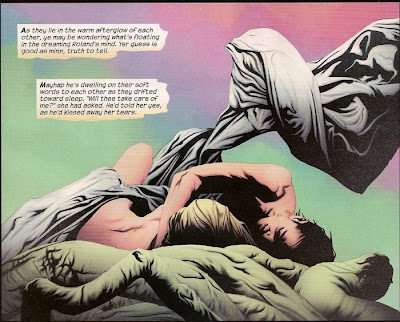 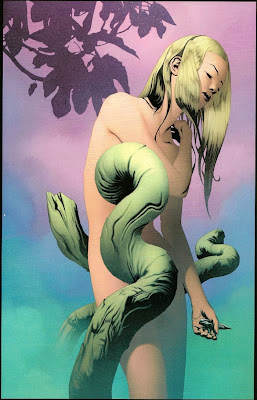 And other freaky stuff! It's kind of a middle chapter of the story, leading up to the conclusion of the miniseries, and I don't really have much to say, other than that it's chugging along enjoyably. If you've read the previous four issues, there's no reason to quit at this point, and if you haven't read any of them, you'll probably wait for the trade if you read it at all. And I think that's all I have to say for right now.
----- 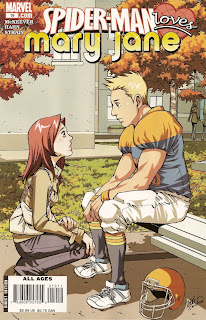 This is yet another nice issue of the wonderful series (which I still have no idea if it's going to keep coming out after Sean McKeever leaves), with a very sweet plot about Mary Jane and friends banding together to help out a buddy. I won't spoil anything, but I did want to point out some of the nice art, like this shot of Flash Thompson: 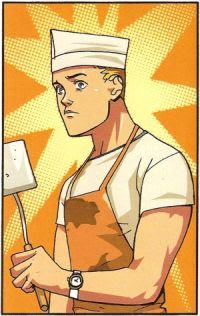 I love the "star" in the background. I'm not sure if that's solely the work of colorist Christina Strain, but it's really nice. I think she brings a lot to the art on this series. Here's another couple of panels I liked: 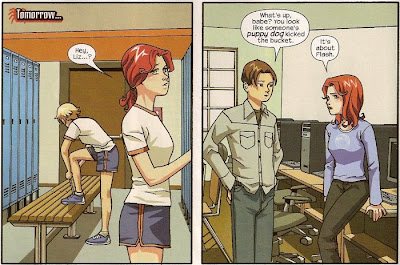 I especially like the difference we see due to the MJ's lack of makeup and styled hair when she has been in gym class. Nicely done.

So, the future of the series is up in the air (as far as I know), but I'm sure at least the next couple of issues will be good. If you haven't read this series (and are interested in teen drama with the occasional Marvel superhero cameo), check out the various digest collections. It's good stuff!
-----

Bonus! There's a four-page Mini-Marvels backup strip by Chris Giarrusso in the book in which Hulk goes on a date with Betty Ross. Really cute, fun stuff; here are my favorite jokes: 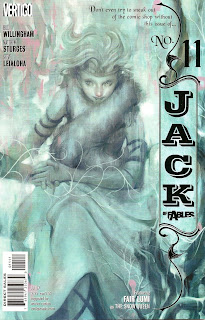 Here, we finally get the second part of the "Jack Frost" story, which was interrupted for four issues before concluding here. It's a funny little tale about Jack taking over the powers of Luni the ice queen and abusing them horribly while he chases some tail. Interestingly, I thought it was going to be a throwaway story, but it sets up a plot point which will surely come up in the future, and it gives us the reason the Ice Queen became a villain over in the pages of Fables. Not bad. Decent fill-in art by Leialoha, but I'll be glad to have Tony Akins and Andrew Pepoy back (next issue?). Good times.
-----

And that's all that I'll discuss at length. I also read Ghost Rider: Trail of Tears, and while it's okay, I'm starting to regret the decision to buy the series. Ghost Rider just doesn't appeal to me. So, maybe another review tomorrow.