But you could say I have an excuse this time. Of course, my annual subscription might conflict with that argument... 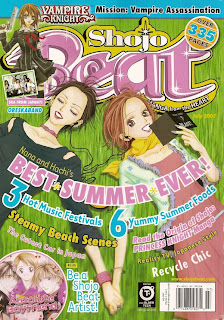 So it's back to my monthly dose of manga for teenage girls. As you can see, the cover feature this month is Nana, which is good because next issue will be the last chapter of serialization in this magazine. But it'll be replaced with Honey and Clover, which is hopefully just as good. It's got a great reputation, and if it's anything like the anime series, it'll be awesome.

We also see the end of Yumekira Dream Shoppe this issue, and good riddance. Wow, that was an insipid series. Maybe it skews too far below my age range cutoff for manga. Teenagers? Sure. Middle school? Maybe. Younger? Uhhh, probably not. Anyway, it's going to be replaced with Sand Chronicles, which looks interesting. Here's the half-page of info about that series: 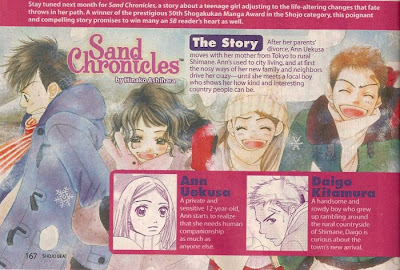 It certainly has an appealing art style, if the colored promo image is anything to judge. I'm optimistic.

My other less favored series, Baby & Me, will be ending serialization after the October issue, and it's going to be replaced by Haruka: Beyond the Stream of Time, which is described as "science-fiction fantasy", whatever that means. I'm sure we'll learn more in the next couple months.

I'm also not a fan of Vampire Knight, but it seems to be popular, so I'm sure it'll keep chugging along in these pages. One thing to note about this chapter: 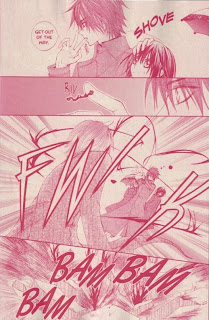 Apparently some vampires have exploding blood. Make of that what you will.

(by the way, in case you didn't know already, this is manga, so read right-to-left on all images).

Okay, on to the reviews of series I do like! But first, we get a special feature this issue: an exclusive excerpt of Princess Knight, by Osamu Tezuka! An essay by Douglas Wolk credits it as the very first shojo manga, and I would believe it, since Tezuka seemingly kick-started every known manga genre. We actually get two excerpts here, with the first being the origin of the main character. In heaven, God is tasked with assigning the sex of babies about to be born, but his plans are screwed up when a cherubic little angel named Tink gives a baby a boy's heart, then God gives it a girl's, as was originally intended.

He sends Tink to earth to get the boy's heart and make sure the baby becomes a girl. Then we skip to the next excerpt after a text summary of what we missed. It seems the baby was the princess of a kingdom, but her parents pretend she's a boy because there is no other heir. So Princess Sapphire grows up pretending to be a prince, but is exposed by an evil duke who wants to take over the kingdom. He has her sent away to a tower to work as a maid. I was annoyed that we missed too much, but it seems all that was mostly an intro to get to the real heart of the manga, in which she escapes the tower and poses as a Robin Hood-esque knight called Ribbon. Meanwhile, Tink has taken the form of a boy to try to complete his task: 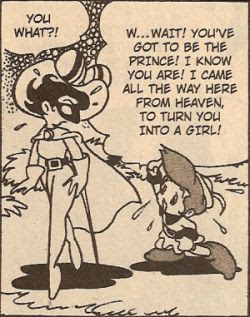 It's all really cute, full of the excellent cartoony action that Tezuka was known for. I was a little bothered by the idea that the only way for a girl to be heroic is to have the heart of a boy, but I guess I can chalk that up to Japanese culture, especially 50 years ago. Or maybe the whole point of the story is to prove otherwise. In another essay by Jonathan Tarbox, Tezuka is credited with breaking ground with this story; he challenged the usual idea of a girls' comics hero, showing that girls can be heroic while still being feminine.

I must say, now I really want to read the entire series. I'm hoping Viz printed this excerpt in hopes that they can eventually publish a translation of the series in digest format. I would be first in line for that one. I'll have to write a letter letting them know.

Okay, on to the reviews of regular series:

As we saw last chapter, Night is in teeny tiny form while his regular body is getting fixed. And he's found a great place to hang out: 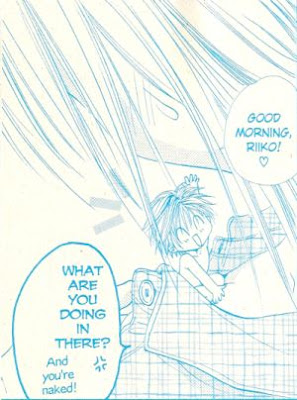 There are some other goofy hijinx, including a bit where Night is hiding in Riiko's pocket while she's playing basketball in gym, and he manages to make an incredible shot, leading the coach to beg her to join the team: 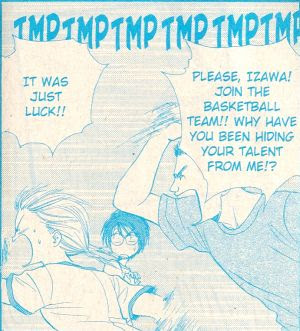 As I've said before, Watase is a master of that sort of outsized comedy. It's good to see some wacky shenanigans in this series rather than disturbing threats of violence against the main character. And then there's a twist that might be bringing a new regular character into the series. I won't give it away, but it does lead to something of a cliffhanger. The next chapter should be interesting.

There's a pretty damn good emotional payoff in this chapter, as Nobara gets a chance to play with the All-Japan Juniors team, but realizes she would rather play with her friends. Very nicely done. And Takanashi is amazing at portraying the athleticism of the game: 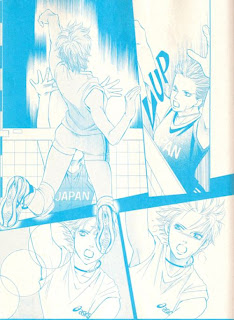 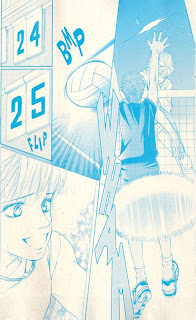 I love that stuff. I guess I don't have too much to say about the chapter, but it brought a real smile to my face to see the result of all the character work in previous chapters. That's some good writing. 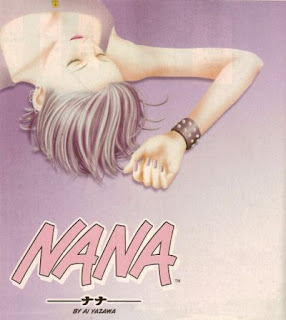 I had to share that title page, 'cause it's so pretty. This chapter sees lots of lovey-dovey soap opera drama, as Hachi decides to try to get together with Nobu, but she has to extricate herself from Takumi, who, being a rock star, probably isn't used to being dumped. Most of the chapter is a really sweet scene between Hachi and Nobu: 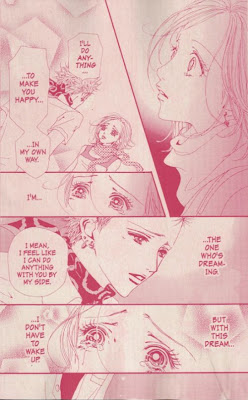 How romantic. And, for any perverts out there (a group which I'm sure my wife would agree includes me), there's a girl/girl bath scene: 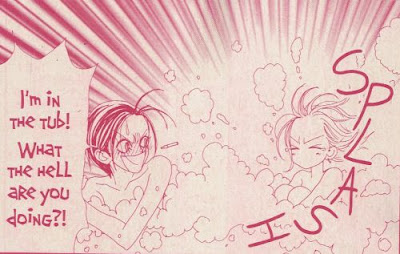 Wowzers! There's also an amusing bit in which Hachi tries to break up with Takumi over the phone, and he gives her every reason to do so:

That's not gonna help. So, we have one more chapter to go before I have to start reading the series in digest form. I'm pretty interested to see how it reads in that format. Interestingly, the editorial in this issue notes that it's going to have a "mature" rating, rather than the "older teen" rating of Shojo Beat. More sex and nudity, I guess. There's always been sex in this series, but maybe it gets more explicit. We'll see.

Bonus! There was a fold out poster included in the issue, and it's going right up on my wall. One side has the cover image of this month's issue, but the other side is this cool punk rock group shot: 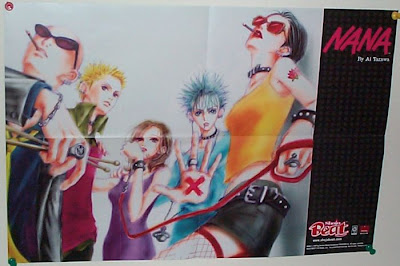 Awesome. I'm proud to display my girlish proclivities to all visitors.

So that's it for this month. We'll see what happens next month, as we say goodbye to Nana, welcome Sand Chronicles, and, I dunno, play some more volleyball and drink some blood, I guess.
-----