Comics from this past week, the one that just ended

I've been slacking off on the blogging for the past couple days, so I gotta try to get caught up. Here's what I thought about what I bought: 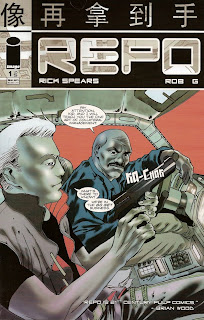 I got this based mostly on the excellence of the Rick Spears-written series Pirates of Coney Island (which is taking a while to finish, isn't it?), but I'm not as impressed with this one (yet). It seems pretty influenced by the film Repo Man, following two repo men, one young and inexperienced and the other old and jaded. It's set in a crazy sci-fi future, which does add some interest to the proceedings, as we also get glimpses of some lady trying to escape from some sort of research facility with an illegal clone. There are some amusing aspects, like the police gunning down a crowd of bystanders when trying to capture the clone, saying "Citizens have nothing to fear. Remain calm. Liberty will triumph." We get some setup for the main plot of the series, with several repo men being sent out to capture the escaped clone, sporting futuristic weapons and hovercars. It's got the promise of crazy action, but we don't really get any this issue.

The real problem I had is Rob G.'s art. He does a good job with the futuristic cityscapes (I especially like the smoke coming from random parts of the city): 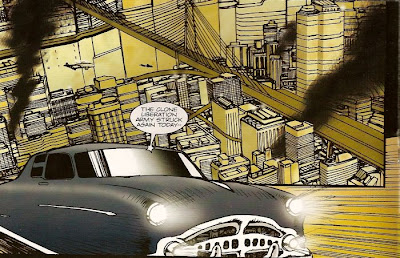 But his character work is really not very good. Here's a typical facial expression: 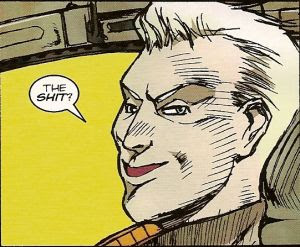 Yikes. So, I'm giving the series one more issue, since Pirates of Coney Island also took a couple issues to get going. I'm hoping the crazy action will drown out any problems with the art, but if not, I'm dropping it.
----- 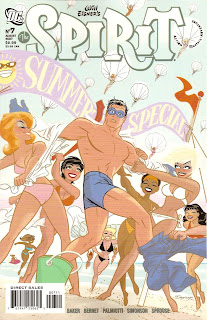 This is the fill-in issue of the series, as Darwyn Cooke is taking a month off, aside from the cover. We get three stories, more in line with classic Spirit stuff. Surprisingly, my least favorite story was the Kyle Baker one; it seemed like he tossed it off in a weekend, inserting little of his usual wit and visual flair. Very disappointing. Sure, there are some funny gags, but when the best one involves the Spirit using Ebonics, you've got trouble.

And then there was the Walt Simonson/Chris Sprouse story, which was decent. Nothing too special, involving the Spirit uncovering a plot involving backstabbing, betrayal, and diamond theft. Sprouse's art was pretty nice though.

But what really surprised me was that I liked the Jimmy Palmiotti/Jordi Bernet story the best. It's more along the lines of some of the best Spirit stories, in which the title character only plays a minor role. We see the inhabitants of a Eisner-esque tenement building, many of whom are having financial difficulties. When the Spirit chases a crook through the building, their problems are all solved through the magic of coincidence. It's nothing amazing, but it's pretty fun, and it features some nice art by Jordi Bernet, who draws all the women quite sexily: 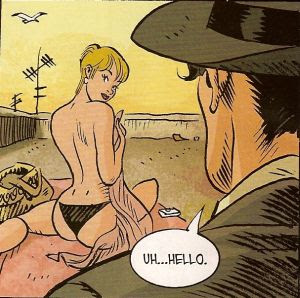 Yowza! So suffice to say, I'll be glad when Cooke returns next month, but it is fun to get a filler issue like this every once in a while.
----- 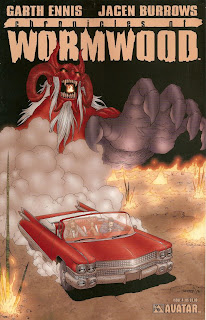 This issue sees our characters' trip through hell, experiencing the horrors within and becoming numb to them. There are some pretty funny bits, including a ring of guys with their head up each other's asses, and this panel, which really cracked me up for some reason: 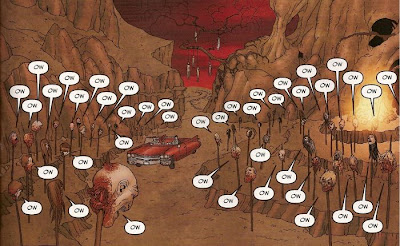 Ennis throws in a little character development here, with Wormwood revealing that he's hoping to jolt Jesus out of his brain-damaged stupor. I liked that; it shows that while Wormwood is a bastard, he does care about his friends.

We also get some stuff with Satan and Pope Jacko, as we learn that they're old pals. I liked the bit where Satan reveals that it was his idea for the Roman emperor Constantine to adopt Christianity. Makes sense, if you ask me. And they get to explore the church's relics vault and find something that gives Satan lots of power. I'm not sure what it is, but it appears to be a spear. Maybe the one that pierced Jesus' side? (the Lance of Longinus, right? I know that from watching Evangelion). Anyway, it leads to Satan trying to start Armageddon (we get a fun appearance by the whore of Babylon). We'll see what happens in the next issue. I'm enjoying it, but if this offends you, stay far away.
----- 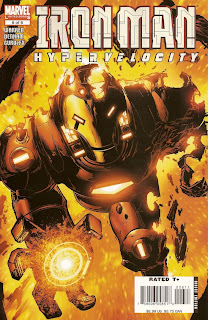 Oh man, I'd say this is, hands down, my favorite book of the week. Adam Warren delivers an awesome fucking experience, full of balls-to-the-wall action, as Tony 2.0 fights a SHIELD helicarrier full of mecha that are intent on hijacking it. He's split his personality program into three pieces, with one extracting information from the captured personality virus Absynthe, one programming a method to greatly increase his clockspeed, and the last handling the negligible job of fighting an assload of mecha armed with railguns and such (to the tune of Iggy and the Stooges' "Search and Destroy"). Good times. It's nonstop action as only Warren can deliver, and I hope he gets to do more stuff like this for Marvel. They have a fun universe for him to play in, and he obviously enjoys it. Now if only they could get him to do the art...
-----

Well, I think that's all. I also could say that Spider-Man/Fantastic Four was pretty cool, with a great use of Dr. Doom; Ex Machina finished its arc, and it was fairly satisfying, but somewhat anticlimactic (nice final scene though); and Army@Love continues to be crazy awesome. Rick Veitch rules. And that's all.