So, yesterday was a pretty eventful one for me. I took the day off work and went into downtown Chicago (I live way out in the suburbs, so it's a bit of a trip for me) for a couple events. First, Graham Crackers Comics (a local chain of stores that I frequent) was having a signing by the art team on Jack of Fables, Tony Akins and Andrew Pepoy. They were both very friendly and fun to talk to. Hopefully I didn't annoy them too much by hovering over their table and asking inane questions. I did buy a page of original art from the second issue of Jack, which I thought was super-cool, since I've never bought original art before. It's too big to fit on my scanner, so here's a photo: 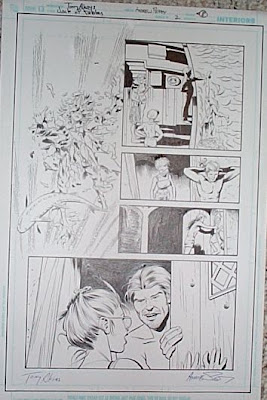 And a detail scan of my favorite panel:

And, just for sake of comparison, here's a scan of the page as it was published: 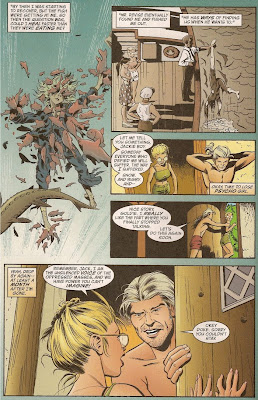 Here's a shot of me posing with its creators: 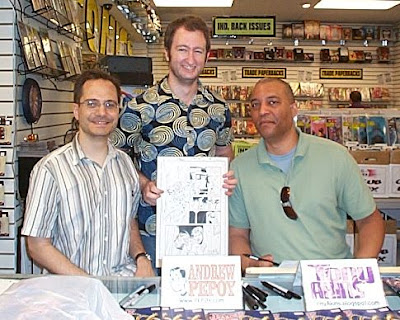 I think they were a little weirded out by my request for a picture. Here's another picture I snapped of Akins doing a sketch of Priscilla Page, a character from Jack: 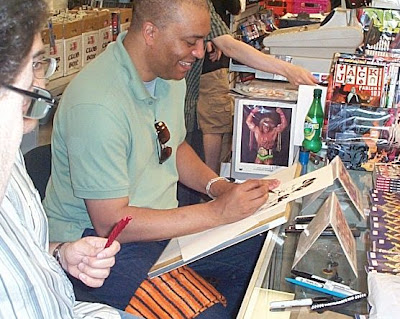 And here's the final drawing: 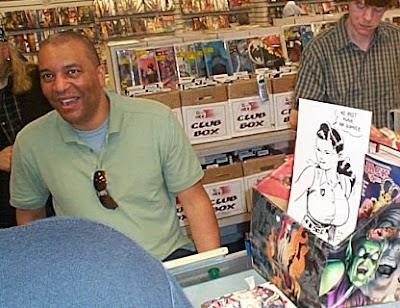 Amusingly, his explanation for the character's top-heavy nature is that she's the Page sister who retrieves fables that have escaped from Golden Boughs and returns them "to its bosom", so that's why she's so bosomy, as opposed to the normal cup sizes of her sisters (I don't know if that sentence makes any sense if you're not a regular Jack of Fables reader). Everybody listening thought that was funny, and somebody made the crack that he made the explanation up on the spot, but he seemed sincere. Hey, I'm not going to question the man about his artistic motivations.

Yesterday saw the release of the twelfth and most recent issue of Jack of Fables, and Akins was excited to see Brian Bolland's cover: 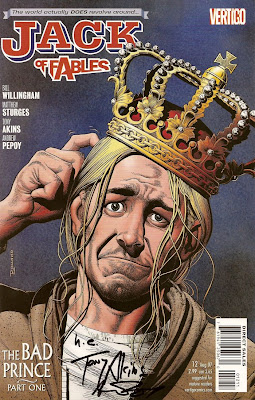 He had known that Bolland was the new cover artist, but he had only seen the art for the next two issues after this one, and didn't realize Bolland would be doing the cover of #12 until he entered the shop and saw it on the racks. Needless to say, he was delighted at how nice it looked.

Later that evening, I attended a reading by Austin Grossman, Paul Hornschemeier, and Nick Bertozzi. It was sponsored by Bookslut, and featured each gentleman reading something he had written (that's what normally happens at readings, I believe). Grossman is the author of the recently released novel Soon I Will Be Invincible, which is told from the point of view of a comic book supervillain (along with that of a fledgling heroine, I believe, but any material dealing with her character wasn't included in the reading). I liked the section quite a bit, and I'll have to try to read the book sometime.

But the real draw for me was the comics artists. Hornschemeier read a prose story that he wrote for Life magazine about a trip he took to visit his parents, accompanied by a slide show of photos from said trip. That was interesting, but Bertozzi's reading was even better, as he showed a slide show of panels from his book The Salon, reading the word balloons (and sometimes the sound effects). It was a great performance, with him doing different voices for the different characters, giving Leo Stein a goofy Southern American accent, Guillaume Apollinaire an effeminate lisp, and Pablo Picasso an outrageous persona. It was tons of fun, and it got me excited to read the book (which I purchased yesterday so I could bring it to the reading and get it signed).

After the reading, I was able to approach and speak to both cartoonists; they're both quite friendly and talkative. Hornschemeier signed my copies of his new book The Three Paradoxes as well as his older book Mother, Come Home: 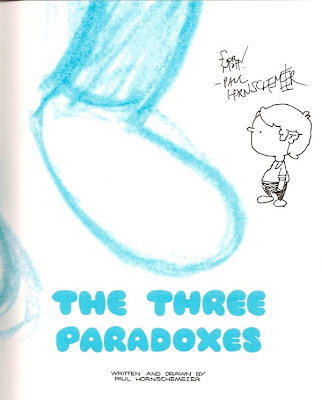 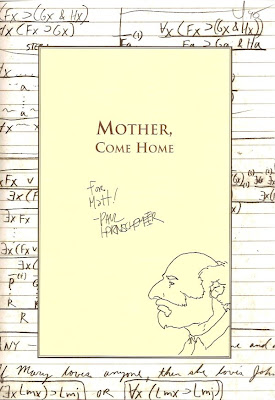 I love the little sketches he did, and I was very impressed at how he tossed them off so easily while standing and chatting with me, holding the book in one hand while he drew. He's good. Here's a photo of me with him, looking like we're old pals: 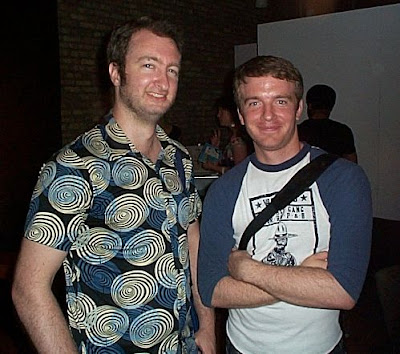 I also spoke with Bertozzi, and he's a really nice guy. I learned at this event that he's working with Harvey Pekar an a biography of Lenny Bruce; I don't know if that's old news, but it was the first I had heard of it. He said he just got the script of around 170 pages, and he's supposed to be finished by January, so he needs to get to work. He also talked about the current case against Gordon Lee, a Georgia retailer who gave a preview of The Salon to a ten-year-old kid on Free Comic Book Day 2004. The book contains nudity, and Mr. Lee is being sued with distribution of obscene material to a minor. The Comic Book Legal Defense Fund is defending him, and Bertozzi encouraged everyone to donate to the cause (more information here). He mentioned that the case doesn't really affect him (aside from intense guilt), but it's a First Amendment issue, so it's important that censorship be fought.

Anyway, Nick was nice enough to sign my copy of The Salon: 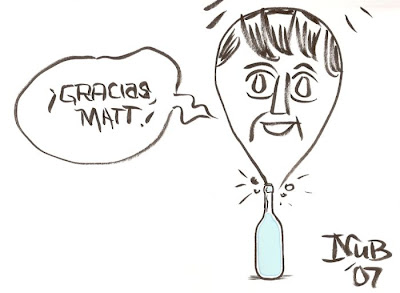 And take a picture of me in which I look fairly ridiculous: 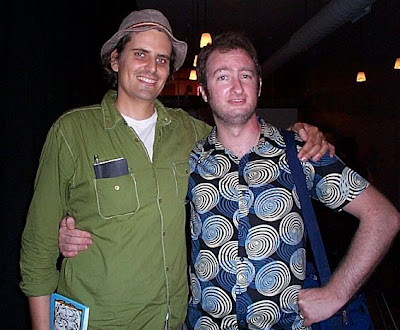 I told him I'll review it once I read it, so I hope it's good. I'm pretty sure it will be though.

So that was my day. I had a great time with all the creators I met, and I've added their blogs/sites to my sidebar if you want to check them out. I would especially recommend Tony Akins' site, since he has posted some really cool artwork. Thanks for a great day, guys, and I hope to meet any or all of you again in the future!
Posted by Unknown at 8:32 PM