Black Metal and The Last Call: One out of two ain't bad

These books haven't come out yet, but lucky me, I got to read them already. Here's what I thought: 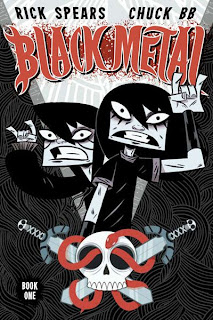 I'm not sold on Rick Spears as a writer yet. He writes the awesome book Pirates of Coney Island, which I really like, but he also turns out books like this that aren't really my style. I haven't read his most famous work, Teenagers From Mars, but I've heard both good and bad reviews. Judging by this book and the first issue of Repo (I haven't read the second one yet), I'm starting to think he's not that great. Maybe his amped-up style works better in smaller doses; while I like the concentrated mayhem in a single issue of Pirates, it might be too much if I tried to read it all in one sitting.

Anyway, this book is about a pair of twin brothers who are ultra-gothy (although they rankle at the term "goth"; are "metalheads" and "goths" two separate cliques?) and take themselves very seriously. Here's how they introduce themselves to their class on their first day at a new junior high school: 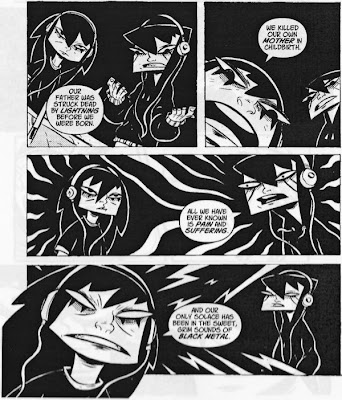 Later, they buy a record at a record store so awesome, a one-handed devil-horn salute will not suffice to describe it: 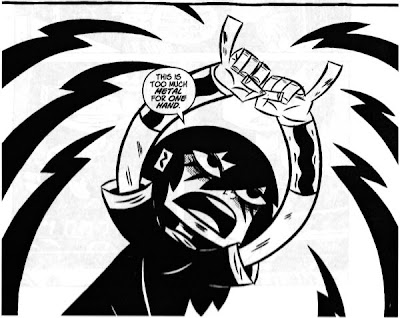 The record is by a band called Frost Axe, and when they get home and play it (on their cartoonishly elaborate stereo setup), it tells the story of a mystical sword forged for a demon lord (named The Roth, which can't be a reference to David Lee Roth, can it? I didn't think Van Halen really fell into the "black metal" category of music) in his war to be the number two guy in hell. But he was betrayed and killed by his rival, Von Char, and the sword was lost. The boys agree that this is awesome and decide to play the record backwards, which unleashes a spell and allows them to get the powerful sword. They end up fighting some demons and hunting down Frost Axe (along with a friend, a love interest, and their little brother, who reminded me of Gilbert Hernandez's Toco) before finding out that they are actually the reincarnation of The Roth, split in two in their mother's womb. So they go to hell to defeat Von Char and regain their throne, waging battles against armies of demons wearing spike-encrusted armor.

It's not a bad story, just not really my kind of thing. My favorite parts were the early scenes of the over-serious brothers clashing with the normal people in their school and their super-cheery foster mother, who they refer to as "the woman". That stuff made me smile at least, while much of the later revelations and battle scenes got tedious. The art style is pretty appealing, with simple, blocky character designs and fun effects, like the lightning bolts that seem to strike demons when they are sliced with the magic sword. I was a bit weirded out by the way characters' eyes seem to overlap the hair that comes down over their faces, but that's not a big deal.

So while it's not a bad book, it's just not for me. Goth kids might eat it up though. While the story wraps up in this volume, there is an epilogue teasing a second volume, so there will be more to come. This volume comes out on August 1; it's 168 pages for $11.95. You can read a 26-page preview here.

Thanks to Oni Press for providing the review copy.
-----

The Last Call, volume one
By Vasilis Lolos 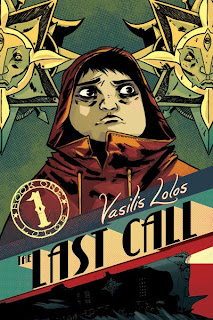 Now this is more like it. I really like Vasilis Lolos' art style; maybe his contribution is what makes the aforementioned Pirates of Coney Island so much fun. At first, this book bears some odd similarities to Black Metal: its teenage protagonists also steal a car in order to go on a road trip, sing along to awesome heavy metal music, make references to Satan, and throw devil-horn salutes. But this story takes a sharp left turn when their car stalls and is seemingly hit by a train (at least, I think that's what happens; we never see the train, just their reaction): 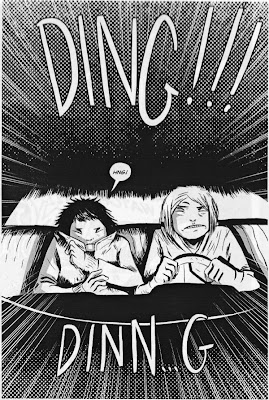 When they open their eyes, they are aboard the train, surrounded by monsters (aliens? Demons?): 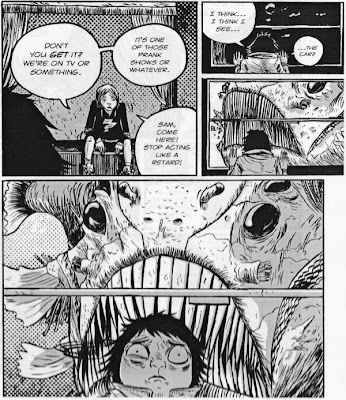 They end up being chased through the train (which, we see from an exterior view, is several stories tall) by the conductor, since they have no tickets, and then are separated, with Sam (the dark-haired boy) ending up alone on the train, vainly searching for his missing friend Alec while also getting involved in a murder mystery. We get some hints as to what is going on, but it's not made clear at this point; future volumes will hopefully answer some questions.

It's all very creepy, aided wonderfully by Lolos' shadowy atmosphere and freaky monster designs. At one point, Sam is helped out by what seems to be a kindly old lady, but when she touches his hand and realizes he is a human, she gives a nasty grin, revealing a second set of pointy teeth. Yikes. Later, Sam ends up bonded to a shadow creature, and it's pretty amusing to see the shadow man's movements match up to Sam's:

It's a highly enjoyable book, and it ends on a real cliffhanger, so I'm going to be eagerly awaiting the next volume. Lolos' is a rising star in the comics world, and he's going to be one to watch in the next few years. I can't wait to see what he has in store. This book comes out on July 25; it's 136 pages for $11.95, and you can read a 38-page preview here. I recommend it, especially if you like weird monsters and stuff like that.

Thanks to Oni Press for providing the review copy.
-----

Look at that, I'm actually getting caught up on my reviews! Hell, maybe I'll even do another one tonight. Check back later and see!