"I am the revelation! The tiger-force at the core of all things!" 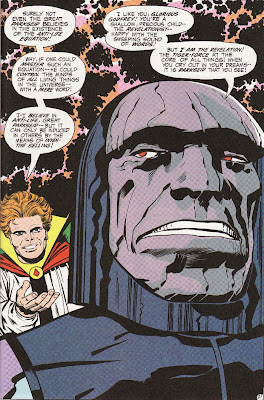 I had to go with the big splash page, mostly due to the awesome dialogue. But that's an awesome portrait of Darkseid. And this was a really good issue, and since it's the last chapter of Forever People in this volume of the Omnibus, it leaves readers on a hell of a cliffhanger. Dammit, now I'm definitely going to have to spring for the next volume(s).

This issue introduces Glorious Godfrey, and I love how he's sort of a combination of a revivalist preacher and a Nazi leader, preaching messages of hate while being accompanied by a cosmic mind-controlling organ. At one point, Godfrey's "Justifiers" round up a group of people and load them onto (flying) boxcars, calling them "animals" and "human trash", and checking their names off a list. He makes an interesting and scary villain, especially coming from a writer of Jewish descent who lived through World War II. In fact, Darkseid's whole scheme (outside of the organized-crime activities of Intergang) seems to be to spread fear and hate. It's really very relevant to current times, both when it was written and in the present. Man, Kirby was a genius.
Posted by Unknown at 9:54 PM