"I never heard a gun dat sounds like a harmonica!" 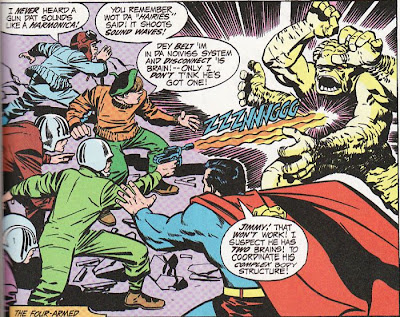 This was the first time that I struggled to find a panel that stood out enough to highlight. If my scanner was working correctly, I would have used one of the full-page spreads of Jimmy, Superman, and friends using the super-trippy "solar-phone", a musical instrument that "gathers in the radio-signals from the stars and converts them into mental musical images!". That gave Kirby an opportunity to do some of his crazy collages, not to mention the wacky tech of the instrument itself: 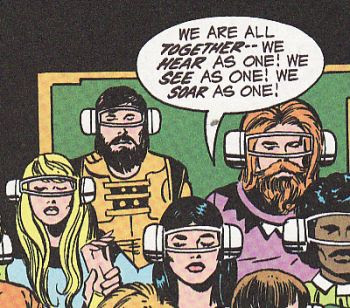 But other than that, the issues consists of Superman fighting the four-armed monster in the panel above, and while I liked the gritty design of the monster, I didn't think any panels really stood out. There were several that consisted of stuff being smashed, or Superman punching (or being punched by) the monster, and a sequence in which the monster trapped our heroes into a cage of energy that hardened into a sort of eggshell, but the one above was the only one that stood out enough to highlight. Oh well; it's cool enough, I suppose. Tomorrow: Mister Miracle!
Posted by Unknown at 9:06 PM