I hope Crack Comics lives up to its name

I found this really cool bit of news via Jog:

This December, Image Comics will publish an anthology featuring characters you haven't seen in a very long time. "The Next Issue Project" will showcase top talent from the world of comics reimagining Golden Age characters that have fallen into the public domain. But it's not quite as simple as that - the series will literally publish the next issue of a great golden age book, with modern interpretations of Golden Age super heroes.

That's from the CBR article about the project, which sounds awesome. Creators involved include Mike Allred, Frank Cho, Kyle Baker, Bill Sienkiewicz, Howard Chaykin, Phil Hester, Ashley Wood, Joe Casey, Frank Espinosa, Steve Gerber, Brandon Graham, Tom Scioli, and plenty of others. I love the idea, with modern creators doing their interpretation of classic, forgotten characters. The Mike Allred one seems to be one of the most notable, since he's illustrating a Stardust the Super Wizard story, and Stardust's creator Fletcher Hanks has been getting a lot of recognition lately. So suffice to say, I'm pretty interested in the project, so I bet I'll be happy when December gets here.

And just for fun, here's a Mike Allred cover: 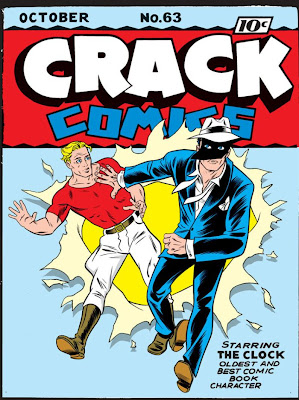