Warren Ellis writes comics (and so do some other people)

So now that I have a working scanner, I can finally get around to reviews of last week's comics. I hope somebody still cares. 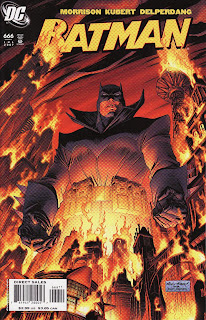 Well, I liked the idea of this comic, and certain parts of it, but as a whole it left me pretty cold. Morrison throws some interesting ideas into his tale of Batman's semi-evil son taking over the role in the future and fighting a fake Batman who might also be the anti-Christ, but it ends up being a barely-comprehensible, violent slugfest that certainly isn't helped by Kubert's early-Image-style art. There are some decent lines, and a few plot points that I suspect will eventually work their way into future stories in Morrison's run (especially the bit about Damian killing Batman), but I think I've lost interest in reading more of this stuff. I'll read the next three issues which J.H. Williams III is illustrating, but after that I'm dropping the book.

I will note that I liked this panel of Damian agonizing over his murder of Batman: 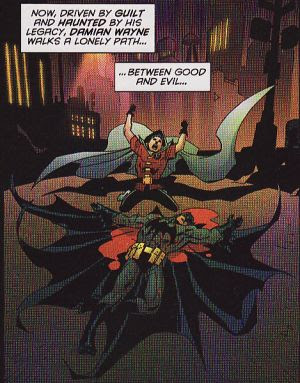 It's a nice evocation of the oft-used "young Bruce Wayne weeping over his parents' bodies". Also, I can always appreciate a gorilla villain. And there was some other clever stuff, but not enough to keep me interested. Good riddance.
----- 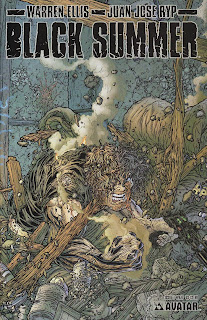 So we get to the nominal first issue of the series, and the political angle is pretty much dropped in favor of fighting and flashbacks. Both of those are quite good though, with highly-detailed viscera in the former, and lots of enjoyable Ellis technojargon in the latter. I always like when he gives detailed scientific explanations for superpowers (or other science-fiction concepts), and while this story isn't too original (in Ellis terms, at least; expect lots of stuff like "bias fields", quantum mechanics, and wireless communication), it's still very cool. Also of interest is that superheroes in this world are simply referred to as "guns", which is an easy way of reducing them to their simplest aspect. Didn't any of those people watch The Iron Giant?

I'm also enjoying Ryp's ultra-detailed art. He reminds me of Geof Darrow, although with a sexed-up sensibility, and perhaps less facility with facial expressions. But he draws rubble with the best of them: 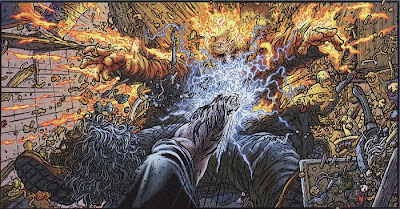 And blood. Lots of blood. I'm sure there will be plenty more in future issues. I for one can't wait.
----- 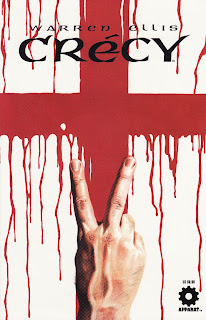 This week's second Warren Ellis book is a bit of a departure for him (although not too much; you can still hear his authorial voice loud and clear): a historical story about the titular battle, one of the most important conflicts of the Hundred Years' War. The main character and narrator is named William of Stonham, and he's a soldier in the English army as it goes on a raid through France, committing acts of terror and ultimately facing the nobility-led French army. However, William is really a stand-in for Ellis, speaking directly to the reader with full knowledge of everything that has happened between 1346 and the present. He gives us a lot of details about the battle, including historical and geographical background (maps included) as well as technical details pertaining to weapons and armor. But rather than being a dry recitation of facts, it's pretty entertaining, mostly due to the humorous voice Ellis gives his character, and his many digressions (we learn about the use of the word "cunt", which we may find offensive, but to the English is "punctuation").

The art is also quite good, effectively conveying the dirty, wet landscape and the mass of soldiers that were present. I've read some reviews criticizing it as cluttered, but I had no trouble following it. In fact, I loved the details and thought they conveyed the chaos of war very well: 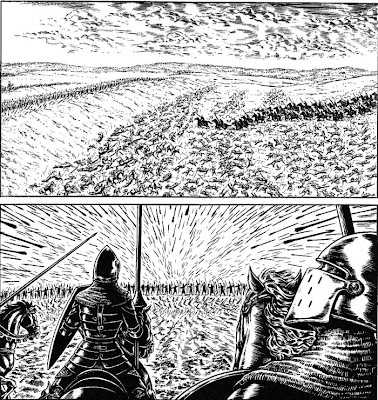 I thought it was a really good book, and I hope Ellis does some more stuff like it rather than staying within the science fiction/crime/superhero genres. He certainly makes the story seem relevant, noting how the battle marked the end of chivalry and drawing parallels to current events (or past ones that came long after the battle). It's a good read, and I highly recommend it.
----- 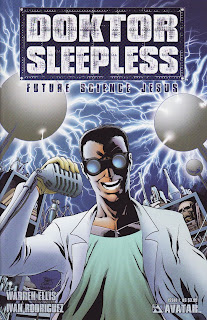 For Warren Ellis's third book this week, he returns to the science fiction genre he does so well, with a story about a social reformer/mad scientist seeking to open the eyes of the denizens of the near-future city of Heavenside, showing them that they are already living in an awesome future even if they don't have jetpacks or flying cars. It's kind of being marketed as a follow-up to Transmetropolitan, but I don't know if that's strictly true; this protagonist seems a bit more idealistic than Spider Jerusalem (hell, the cover calls him a "future science Jesus"). It's an interesting start, but some of it seems to be a bit of a retread of previous Ellis works, focusing on wireless communication and body modification (I did like the use of the term "grinder", likening body mods to "leveling" in an RPG). I'm hoping Ellis throws a curveball in future issues and adds something new to his formula. Even if he doesn't, I'm sure it will still be enjoyable, but I would love to see him come up with new ideas rather than doing endless variations on his old ones.

Part of what drags this book down slightly is the art. Ivan Rodriguez isn't bad, but his pictures look a bit rough and smudgy at times, where clean, crisp details would help. I might just need to get used to it, but I often found details hard to make out, like in this panel: 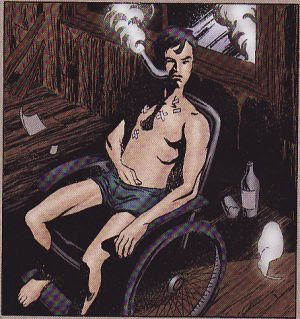 Is that supposed to be a smokestack coming out of that guy's cheek? It's hard to tell. So I think the art has room to improve as well. I'm hoping this book can turn into something pretty good, but as of this issue, it's only a bit above average.
----- 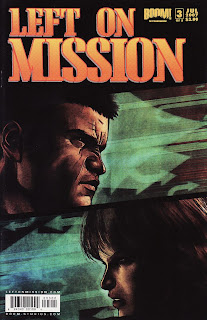 Greg Burgas called this a "padding issue", saying that it feels insubstantial. I happen to disagree, since I really liked the flashback scenes that take up the issue, filling us in on the background of Eric and Emma's history together. There are some really nice scenes, and they're richly colored, making them stand out from the sepia-toned "present". Very nice artwork by Francavilla, who has really grown on me over the past two issues. In this issue, I especially like the layouts, which remind me of Sean Phillips' work on Sleeper: 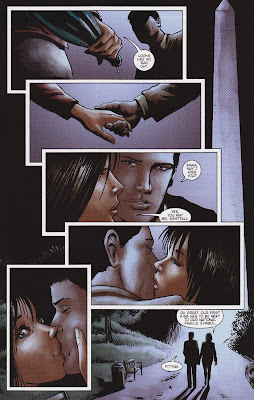 It all leads to a genuinely sad "breakup" scene, which will probably inform the events of the next few issues. I can't wait to read them.
-----

And I think that's everything worth noting from last week. I thought about reviewing the latest issue of Hellboy: Darkness Calls, but the review would have just said something like "Hellboy fights a guy, and it's awesome". So I'll get to that one in the next issue or two. Suffice to say it's good. More reviews coming tomorrow!
Posted by Unknown at 8:43 PM