The Salon: I really need to study more art history

Hey, if you like this book (or even if you don't), you should support the Comic Book Legal Defense Fund in its defense of a guy being sued for bullshit reasons involving it (the book). You can get more information here. Anyway, on with the review:

The Salon
By Nick Bertozzi 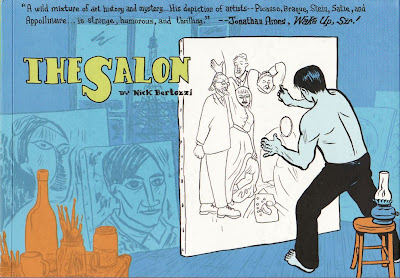 You know what this book needs? Some endnotes. Or annotations, or something giving more information and context to the characters and works of art appearing within. Because while I loved the story, I feel like much of the references were going right over my head. For instance, I'm sure this panel is referencing a painting that I should recognize: 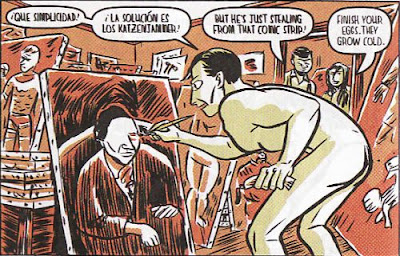 But I'm clueless as to what it's supposed to be (I showed it to my wife, who majored in art history in college, and she recognized it, so I know it's not something Bertozzi made up). I suppose it doesn't really matter that much, since I got the point of the scene (Picasso stealing a technique from the Katzenjammer Kids comic strip), but it would have been nice to be able to flip to the back of the book and see the name of the painting so I could go look it up later or something.

Anyway, that minor note aside, this is a hell of a fun book, detailing the supernatural adventures of a group of modernist artists and their associates (who include Gertrude Stein and Alice B. Toklas) as they deal with the repercussions of a weird type of blue absinthe that allows its users to enter paintings. It's freaky stuff that makes for a fun plot, but I think I liked many of the surrounding details even more, especially the scenes in which Georges Braque and Pablo Picasso are working together to invent cubism. I found it fascinating, especially the way their personalities clashed with each other as they were striving to come up with a new art style. And that's not the only incidental subplot; we also get to see stuff like Alice B. Toklas' seduction of Gertrude Stein, or Braque's rivalry with Henri Matisse. And the general atmosphere of the book is excellent, from the dirty streets and seedy whorehouses of Paris to the parties and studios of famous artists. I loved getting to experience the world of the book.

Bertozzi's art realized that world excellently. He usually uses only two or three colors, creating a high-contrast look that he only strays from when depicting the blue absinthe or its effects: 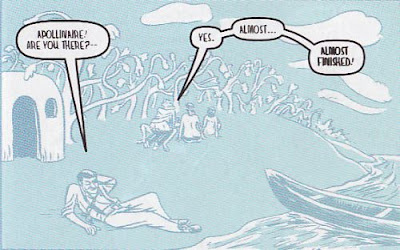 The light blue coloring is very effective in giving these scenes and items and eerie quality. I also love the physicality of the characters (see the picture of Picasso above for a good example), who are often depicted running, fighting, or fucking. Even their conversations are often quite animated, featuring dramatic gestures and movement that keeps scenes from being just talking heads. And I should also mention the hilarious sound effects, which are in French (sort of), since the story takes place in Paris, I guess. We get sounds like "tappe", "scratche", "stompe", and "slamme". It's a fun idea that really adds to the atmosphere, and helps keep a book about fine art from being too serious.

So it's an excellent book, and I would recommend it to anyone interested in these sorts of comics (as long as they're not offended by nudity, since there's quite a bit of it, both male and female). I might even be able to get my wife to read it, since she's an art-lover type; I suspect she might have trouble following the absinthe plot though. I'm going to have to check out more of Bertozzi's stuff now. Keep up the good work, Nick!
-----

Wow, I'm actually getting caught up on posting about my recent reading. Let's see how long I can keep up this pace...
Posted by Unknown at 12:04 AM