The Three Paradoxes: Now I'm curious about the fourth

Hey, this gives me a chance to link to my previous post about meeting Paul Hornschemeier. After reading this book, I see the connection between it and the story and slide show he did that night. Cool.

The Three Paradoxes
By Paul Hornschemeier 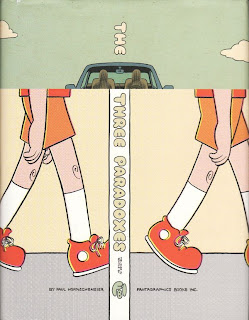 I really like Paul Hornschemeier's art style; it's clean and (somewhat) simple, yet really quite elegant. I think the only other book of his that I've read is Mother Come Home, and I loved that one; it was an incredibly emotional story, with some wonderful artwork and neat comics storytelling ideas (see this post for a look at its innovative use of word balloons). The Three Paradoxes is more of a mixed bag, telling the story of a visit with Hornschemeier's parents in which he attempts to finish a comics story, goes on a walk with his dad and takes pictures of his childhood hangout spots, reminisces about childhood experiences, imagines the incident which led to the neck scar of a convenience store cashier, and thinks about his planned meeting with an online acquaintance. Oh, and he also pauses to illustrate the adventures of the Greek philosopher Zeno, formulator of the titular paradoxes. It's all pretty interesting stuff, but I don't know if it really coheres into a satisfying whole. There seem to be some hints at the paradox theme, since Zeno's theories tie into Paul's problems finishing work, advancing his career, or even letting go of childhood traumas.

But while I found the story as a whole to be slightly unsatisfying (although not as much as some), there are some individual bits that are quite excellent. Especially the variations in art styles, from the relatively drab look of the "real world": 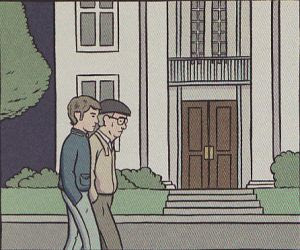 To the half-finished cartooning of the comic Paul is trying to complete: 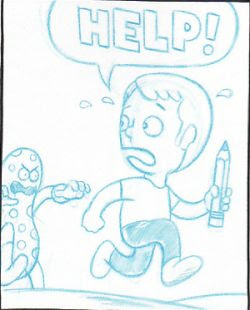 The similar-looking remembrances of Paul's childhood: 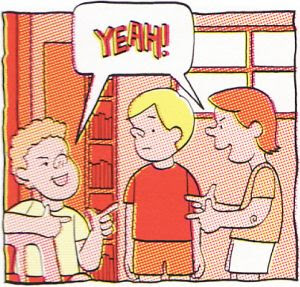 Lurid imaginings about the guy with the scar: 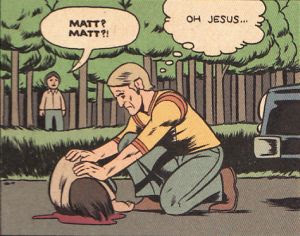 And finally, the cartoony adventures of Zeno: 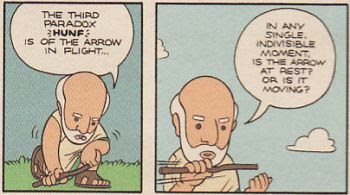 I think the story about the scar and the Zeno story were my favorite bits. Anyway, it's certainly not a bad book, but I hope Hornschemeier turns in a more coherent story for his next work.
Posted by Unknown at 11:13 PM