UPDATE: See the bottom of the post for the newest updates.

I was going to put this entry in its own post, but I figure there will continue to be more news and announcements from what is often referred to as the "nerd prom", so I'm dedicating this post to news out of the San Diego Comicon that I find interesting, starting off with: 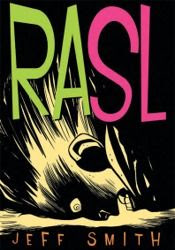 Looks like Top Shelf is putting out an omnibus of Marshal Law, which is cool, because that's an awesome series. It's a good look at early Kevin O'Neill artwork, if you only know him from The League of Extraordinary Gentlemen. And a hilarious, violent, fun series too, with some great lampooning of superheroes.

Darwyn Cooke is leaving The Spirit after issue #12. Bummer. Unless his replacement is somebody amazing, I think I'll be leaving it too.

Jon Favreau (who's directing the Iron Man movie) and Adi Granov are doing an Iron man limited series. It'll probably finish coming out sometime in 2010. Might be interesting, but if I read it, I'm sure I'll wait for the trade.

CBR has a gallery of images from Brian Wood's upcoming Viking series from Vertigo, Northlanders. There's going to be a panel about the series later today, so there will be news and whatnot at that same link.

This one is pretty interesting: Dark Horse is launching a MySpace page called MySpace Dark Horse Presents, and it's kind of a new version of their anthology series, except it's free to read on the page. It's up now, and the first "issue" has a story called "Sugarshock" by Joss Whedon and Fabio Moon, along with an Umbrella Academy story by Gerard Way and Gabriel Ba. Cool. It'll be something to watch. You can read more info in this CBR article.

Viz announced a few new manga titles (I like the title of Monkey High), but their interesting news is that they've licensed the anime versions of both Nana and Honey & Clover. I don't know about Nana, but I've seen some of the H&C anime, and it's excellent.

There will probably be more news later today, so stay tuned (since I'm such a great source for comics news...).
-----

Newsarama has a good interview with Cory Doctorow about IDW's upcoming series of comics adaptations of his short stories.

Lots of news from Marvel, including a new ongoing Eternals series that's a sequel to the Neil Gaiman/John Romita Jr. miniseries. However, it's by Daniel and Charles Knauf, with whom I'm not familiar (apparently, they write Iron Man), and since I was kind of disappointed with the mini, I'll probably skip it.

Also from Marvel, Terry Moore and Humberto Ramos will be the new creative team on Runaways after Joss Whedon's six-issue arc. I'm not so sure about this, especially Ramos' art style, so I think I'll be dropping the book and possibly picking up a collection if I hear good things.

And the big news is the announcement of Warren Ellis and Simone Bianchi as the new creative team on Astonishing X-Men after Joss Whedon and John Cassaday finish their run. Apparently, the title is going to change to Astonishing X-Men: Second Stage, and maybe starting with a new #1. I'm pretty leery of this prospect, since I don't know if I like Ellis on big mainstream books like this (although his Ultimate Fantastic Four and Ultimate Galactus books were pretty good), and while Bianchi can draw pretty, I don't know if his art style will work on a book like this at all. Plus, I'm sick of the X-Men and wish Ellis would do more stuff like Desolation Jones (I guess I should be happy with Black Summer and Doktor Sleepless...). Anyway, here's a picture: 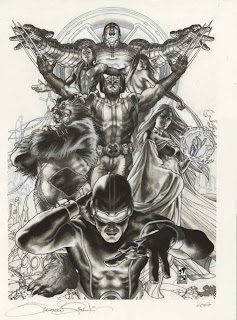 I guess that's all for right now, but there might be more interesting stuff announced later (and tomorrow, and Sunday), so I'll keep adding to this post. I suppose I could have mentioned Mark Waid's new post as Editor in Chief of Boom! Studios, but whatever.
-----

Vertigo is starting a new House of Mystery series, with Bill Willingham and Matthew Sturges (writers of Jack of Fables) writing. Might be cool.

Also from Vertigo, Joshua Dysart is writing a new Unknown Soldier miniseries, and it will take place in Africa, dealing with the little-reported (in the United States) conflicts on the continent. Could be interesting.

Vertigo again: Jamie Delano is writing a Hellblazer graphic novel, with Jock providing art. I don't usually read Hellblazer, but I suppose I could read this.

Well, crap. I have very little interest in all this "Crisis" stuff that DC seems to have going on all the time, but apparently the so-called Final Crisis is going to be written by Grant Morrison (with art by J.G. Jones), ensuring that I will at least pay a little bit of attention to it. Not that everything Morrison touches is gold (see my upcoming review of Batman #666), but it could be really big and cool, in the manner of his JLA stories.

I don't know of this has much news, but CBR has a report from the Groo panel, and it's fun to read if you're a fan of that series. I wish I could have been there. Maybe the news about a Groo/Tarzan crossover is new; I don't know. I'll be glad to read the 25th anniversary special coming out next month.
-----

You can see the Eisner Award winners here. They all seem like pretty good choices, except that awful Batman/Spirit book written by Jeph Loeb (you can read my review here).

DC announced the titles of lots more Minx books. Some of them sound interesting, mostly due to the creators involved, which include Steve Rolston, Inaki Miranda, Brian Wood and Ryan Kelly, David Hahn, and Rick Mays.

I don't know if this is new news, but I guess P. Craig Russell is adapting Neil Gaiman's The Dream Hunters into a comic. That seems weird, since it's already a sort of comic with Yoshitaka Amano's illustrations. I guess Russell is also adapting Gaiman's novel Coraline, which is also being made into a movie. Ah, I'm sure I'll read them both when they come out; I love Russell's art.

According to Bully, the second Spirit anthology issue (#13?) will feature contributions from Gail Simone, Michael Golden, and Jeff Smith.
-----

Lots of interesting stuff from the Image panel, but what stood out for me was the anthology Pop Gun and Corey (Sharknife) Lewis's new Slimline series Pinapl.

Newsarama has an interesting interview with Christos Gage about his upcoming graphic novel The Lion of Rora from Oni, which he's co-writing with his wife, with Dean Trippe provided the art. That might be one to watch for.
-----

And I think that's everything of note for today. There was some talk about Marvel's thrice-monthly publishing plans for Spider-Man, with the most notable news being Dan Slott as one of the writers and Chris Bachalo as one of the artists. I probably still won't read it though. We'll see if anything else gets posted on any of the news sites, but it's possible that the flow of news is slowing down, so this might be the last update. I don't know if I'll do any more like these, but I thought it would be interesting to keep track of the news from the convention that I found notable. I'll probably post something about Wizard World Chicago next month, but that's only because I'm going to be there. Anyway, I'll hopefully get my replacement scanner on Monday, and then I can get back to the regular reviews.
----- 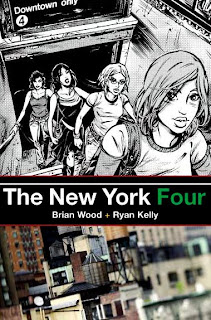 Image is doing a revival of some Jack Kirby properties, Silver Star and Captain Victory. Looks like they'll be written by Erik Larsen (at least at first), so that doesn't excite me too much. We'll see who ends up doing the art. I doubt they'll be able to capture Kirby's energy (see Jack Kirby's Galactic Bounty Hunters for an example of that sort of failure), but it might be interesting to see what they do.

DC had a Fables panel, and Newsarama's report doesn't really have any earth-shaking news, but it's an interesting read if you're a fan of the series (and its sister title, Jack of Fables). The biggest news is probably that the two titles will start to tie together a bit more, and that a sort of follow-up to 1001 Nights of Snowfall is being planned, although they really only mentioned vague details, saying that real news and a title won't be announced until next year's San Diego convention.

I figured I was going to skip this, but since I'm updating again, I suppose I'll mention it: manga creator team CLAMP is going to be doing a series for Dark Horse. I'm not really a fan of any of their series, but it is interesting news.

Not too much of interest from CBR's report about the Wildstorm panel, except the cover of The League of Extraordinary Gentlemen: The Black Dossier: 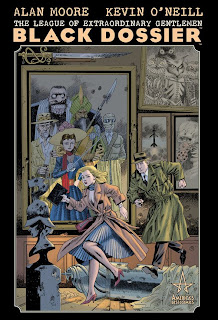 Now we'll see if it actually comes out this year.

The new company Radical announced some interesting-sounding books, especially the ones by John Bolton and Bill Sienkiewicz.
-----

Okay, I think that's really the last update. All major news has been reported, so if I find out about anything else worth mentioning, I'll just put it in its own post. Hopefully I'll be able to get back to a more normal schedule tomorrow.
Posted by Unknown at 9:50 PM