Actually, they're fine together, but I thought it was funny. And really, Parasyte is probably more science fiction than horror, but whatever. 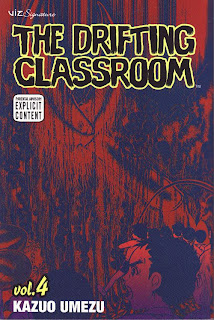 Man, the metaphors are going crazy in this volume, spreading beyond the school system and commenting on government and society. At the beginning of the book, the students decide to hold an election to determine who will be leader, Sho (our protagonist) or Princess (the leader of a bullying girl-gang). Princess and her cohorts try to bully students into voting for them, threatening violence to any Sho voters. And then [oh, spoiler] it ends up as a tie, with only a young child to cast the deciding vote [end spoiler]. Later, the students set up a huge, spiked booby trap to stop the monster that's roaming the desert in case it comes to attack the school:

As soon as I saw the trap, I knew it would be tripped by a student, symbolizing the way defense against "outside threats" can often be more dangerous to a nation's citizens than the "invaders" they're trying to stop.

Later, the monster does attack, leading to the use of another awesome trap: 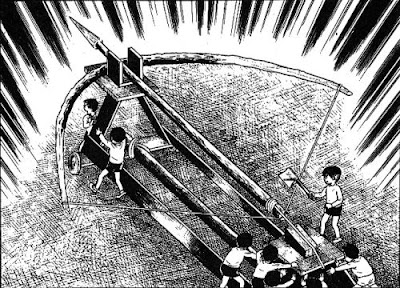 And plenty of gruesome deaths: 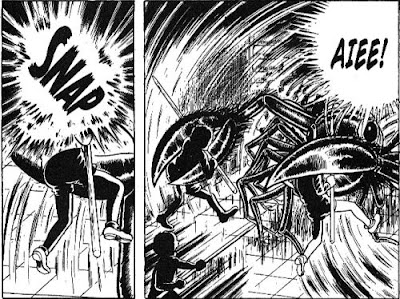 Then the kids track the monster back into the desert, hoping to kill it once and for all. But then they discover that it's actually being manifested from a kid's imagination, so the dilemma of whether to kill the kid or not arises. It's pretty interesting, since in the last volume, a group of kids tried to crucify another kid that they believed was somehow the cause of the situation. In this volume, the main characters are faced with the decision of whether to do the same thing, since they know that this kid is responsible (whether consciously or not). I could probably come up with some sort of symbolism for this dilemma (punishing problem/underperforming students?), but I might be stretching the metaphors a bit too far already.

In fact, I'm not sure that the metaphors are holding up that well at this point (my limited knowledge of Japanese society at the time doesn't help). It seems that satires and allegories eventually run into a problem (if you want to call it that) in which following the story and characters become more interesting than trying to discern the author's symbolism. It's an interesting conflict, but if the characters are well-drawn and the plot is interesting and well-constructed, it doesn't make too big of a difference in the long run. And fortunately, Umezu is a hell of a storyteller, drawing us right in to this crazy situation and getting us to root for or against his excitable characters. I certainly can't wait to follow their further adventures and see what sort of insanity he has in store.
----- 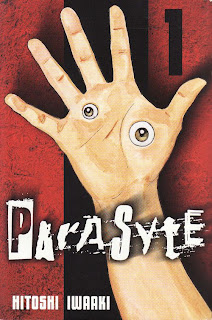 I picked this one up after reading good reviews by the likes of Shaenon Garrity and Mike Sterling. And it's pretty damn enjoyable, with some crazy monster designs and wacky comedy. The premise has to do with a bunch of alien spores that invade the earth and take over the bodies of the humans they come in contact with, replacing the head with their own morphing biology, then regularly gruesomely murdering and eating normal humans. The main character, Shin, is infected, but the alien fails to reach his head, instead taking over his right arm. He names the alien Migi (which is Japanese for "right"), and tries to go about his life, which is constantly being interrupted by encounters with other aliens or Migi doing inappropriate things with his hand.

Artwise, the depiction of humans is nothing to write home about, with the shots of expressions of surprise or anger being especially poor: 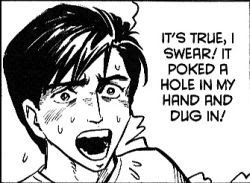 But the scenes of humans (or other animals) morphing into freaky weapons are where the artwork shines, like in this scene of a guy's head turning into a bladed weapon: 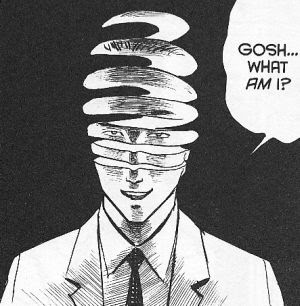 And the portrayal of Migi is pretty charming, while still being offputting and weird. He's usually depicted as a mouth on Shin's hand, with the fingers turning into eyestalks: 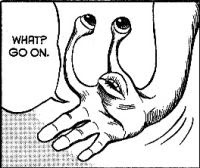 But we also regularly see him roaming around Shin's room, studying books and learning as much as he can about Earth: 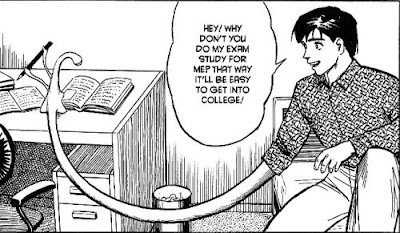 Migi's really a pretty interesting character. He failed in his mission since he didn't take over Shin's head, so he seems at odds with other aliens that they encounter. But he professes to have no human emotions, claiming that he is only using Shin as a host. They fight several other aliens, but Migi claims that it's just for survival; he's afraid the aliens will kill him for failing his mission. I'm pretty curious to see how he develops in future volumes.

Iwaaki also makes this an environmental issue, implying that the aliens might be a defense against the damage that humans are causing to the Earth. He also raises some interesting questions about the aliens, like when a pair of them that have inhabited male and female bodies conceive a child; what will be the result, and should these aliens be allowed to live after killing two (or possibly more) humans?

And then there's the cool action, with Shin and Migi getting in several fights that consist of freaky blades whizzing through the air like a morphing swordfight. And the silly comedy, like Migi constantly bugging Shin about having sex with the girl he likes because he can tell from his hormones that that's what he wants to do. It all makes for a very enjoyable book, and while I don't think I'll be rushing to the bookstore to pick up every new volume, I'll certainly try to keep following the series.
-----

Okay, I'm starting to get caught up. We'll see how much more I can continue to write over the next few days...
Posted by Unknown at 10:18 PM