I don't know if this counts as a review, but it's what I want to talk about after reading this book (which I picked up at Powell's Books in Portland, Oregon; it's an awesome bookstore that anybody who goes to Portland should visit). 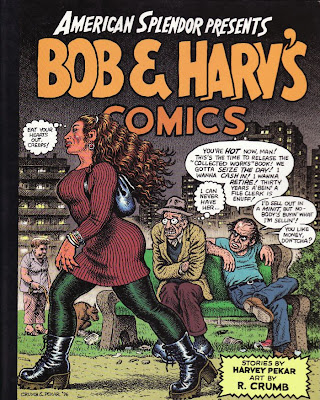 I don't know if I have too much of a critical nature to say about this book (or any American Splendor book, for that matter). I mean, these stories have been around for 35 years in some cases; pretty much anything I could think to say has probably already been said. I do really like Harvey Pekar's writing, from the rhythm of the dialogue, to the vivid accents and mannerisms of the "characters", to the sense of place that he brings to his stories. They're a delight to read, especially when illustrated by Robert Crumb, a true master of comics art. To name just one little detail, I love the way Crumb often draws Pekar wearing ratty old t-shirts that are full of holes. I don't know why, but that cracks me up. These are wonderful stories, and I was really glad to find this book.

So anyway, I wanted to discuss one technique that Pekar seems to use often, and really well, in my opinion: the silent panel. You don't see it very often in comics, but since Pekar is often writing conversations, it's natural to see pauses, whether it's when the speaker (in this case, Harvey speaking directly to the reader, natch) is gathering his thoughts: 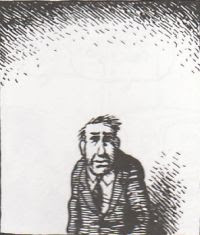 From "The Harvey Pekar Name Story" 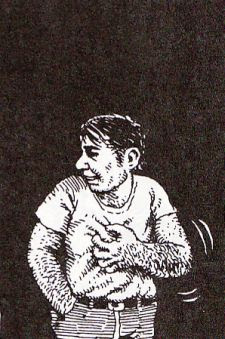 From "The Young Crumb Story"

Or if there is just a natural lull in the conversation: 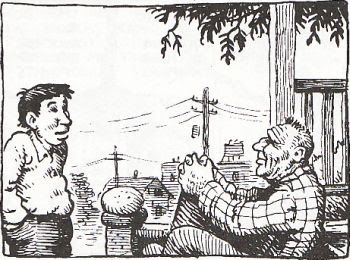 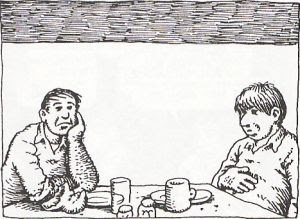 From "Lunch With Carmella"

And then there are the story-starting panels featuring characters in their environment before the "action" starts: 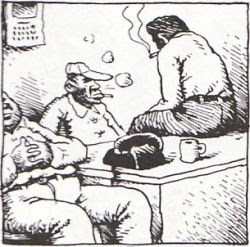 From "Rollins On Time" 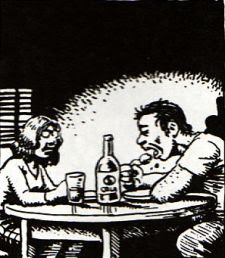 From "Freddy Visits for the Weekend"

Along with some other less-categorizable scenes, like this panel of Harvey contemplating an interviewee: 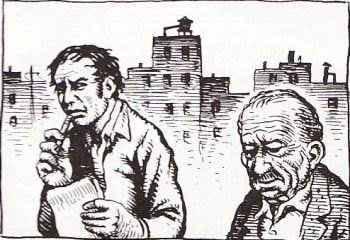 Or this shot of two ladies exchanging a knowing glance: 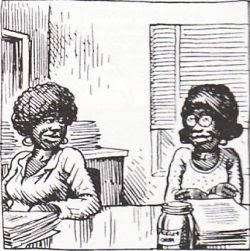 There are other examples (like this contemplative panel from "Hypothetical Quandary", which I mentioned way back in February, in my post about An Anthology of Graphic Fiction), but the ones above seemed pretty prominent to me. There are probably other creators who depict conversation in a manner similar to this, but I think this is the first time I've noticed (or at least paid attention to) it. I'm probably going to start seeing similar panels all over the place now. But whatever the case, I still think it's a storytelling technique that Pekar uses very effectively, regulating the pacing of his stories and adding quiet, poignant moments. Keep it up, Harv! You keep writin', and I'll keep readin'.
-----

Okay, I think that's all for tonight. I might or might not be able to write something tomorrow. Man, it'll probably be a couple weeks before I get all caught up on what I want to talk about.
Posted by Unknown at 11:48 PM