I kind of have to talk about this, since I always go on about how much I like it, and it's the end. Not sure how coherent it will be though... 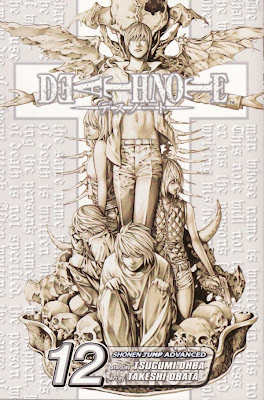 So we finally get to the much-disputed end of the series. From what I've read around the web-o-blog-o-comics-sphere-tubes, many were disappointed with this volume, and the series in general after volume 7, the culmination of the Light/L rivalry which had pretty much defined the series up to that point. As I mentioned in my look at volume 8 (and all the previous volumes, sort of), I thought the choice to kill off L so abruptly was bold, and I was curious as to where the series would go after that point. Now that we've reached the end, I find that there have been some excellent scenes and tense moments, but the series never really returned to the highs of those first seven volumes. But I'm glad it ended; I'm sure Ohba and Obata could have dragged it on for much longer. They probably realized that it needed to be finished, and they wrapped it up about as satisfyingly as they could.

Really, there were only two ways the series could end: Light wins and takes over the world, or he loses. Of course, if he lost, there might be some ambiguity about the future of the Death Note and whether Near or somebody else would step in to become Kira, but since the series ends with this volume, those would just be ending beats rather than true plot developments. So the real question is whether Light wins or not. To tell the truth, I probably would have been satisfied with either ending, since while it is fun to watch the "bad guy" get his comeuppance, it can also be enjoyable to see him win. And even that distinction depends on whether you consider Light to be the villain (which I think he is, but he's pretty charismatic and certainly the main character of the series). So what happens? Well, I'm not going to spoil it for those who haven't read the volume, but this picture gives a clue: 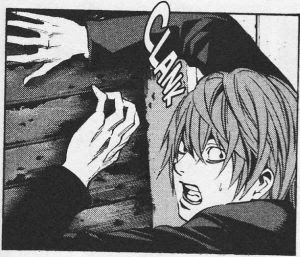 I love his expression. The volume consists almost entirely of a face-to-face confrontation between Light (with his team from the Japanese police force) and Near (with the American anti-Kira brigade). It seems they both have plans within plans within other plans to trap and defeat each other, and it gets very tense. Unfortunately, much of the tension is defused by the opponents endlessly explaining their plans to each other (or to the reader, really). Of course, this isn't exactly a new development for the series; Light has always taken great pains to crow about his detailed schemes; I eventually stopped trying to wrap my head around all the mechanics of his plans and just assumed they worked. So it gets a bit tiresome to spend so much time detailing the multiple maneuvers here. But as I said, it ends up with a pretty satisfying resolution (and a fairly violent one at that).

So is the series worth reading? Well, the first seven volumes are quite excellent. After that, it's still a fun ride, but not quite as brilliant. I would still recommend the series to someone who was interested, just not as wholeheartedly as I once would have.
Posted by Unknown at 11:00 PM