In the past, Chris Sims has praised Jim Aparo, saying that when he draws somebody like Batman punching someone, it looks like the punchee's head is exploding. Well, I say Aparo has nothing on Jack Kirby, as we see in today's Fourth World panel, from Superman's Pal, Jimmy Olsen #136: 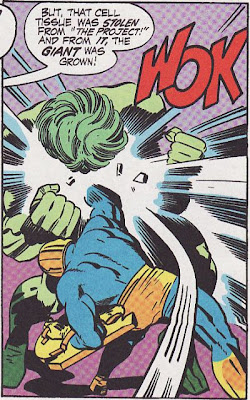 Ouch! By the way, that's a clone of Kirby's Golden Age hero, the Guardian, fighting a giant, Kryptonite-laced clone of Jimmy Olsen. And that's one of the less crazy concepts this issue, which also has stuff like an army of tiny clones of the Newsboy Legion and Dubbilex the D.N.Alien. Kirby rules.
Posted by Unknown at 6:06 PM