I think I can squeeze this review in before we leave... 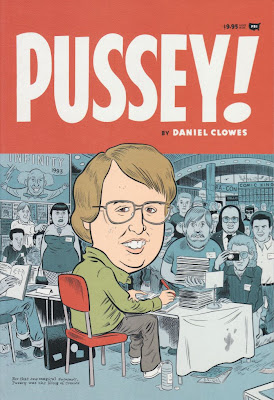 Man, this is one savagely funny satire of the comics industry as a whole, but also the culture of comics and how it interacts with commerce and art. Funny, funny stuff, and even though it was written in the early 90's, it's still pretty valid today.

The main character of the book is Dan Pussey, a Rob Liefeld-like superhero comics artist who stumbles into (relative) fame and fortune by copying the art from the comics he grew up reading as an unsocial nerd. It's pretty amusing to see him blunder cluelessly through the world of comics, beginning when he is signed on as part of the "bullpen" of Doctor Infinity, a guy who represents every unsavory businessman in the history of comics, from the guys who got Siegel and Shuster to sign away the rights to Superman to any mogul that signs his name to somebody else's work. He's a total ass, and he makes it worse by speaking in glorious terms about the majesty of their work on titles like "Muscle-Master" or "Infinity Hombre". 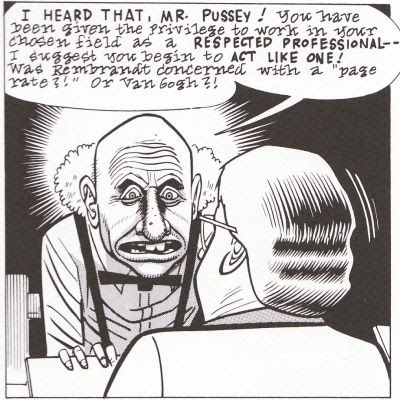 Later, Pussey attempts to enter the world of art comics, and they're just as bad, with artists purposely working in horrible conditions in order to make the work more "authentic": 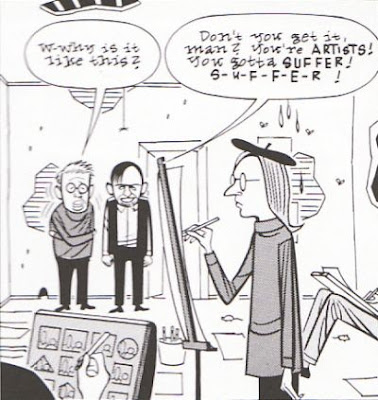 Pussey turns in the only thing he knows how to do, crappy superhero comics, and the publisher thinks it's genius, perfectly capturing the idiocy of the genre. That is, until he realizes Pussey was serious; that revelation causes him to be physically ill and throw Pussey out. When our hero asks about payment (which seems to be the only thing he's really interested in), the publisher says, "Artists don't get paid! That's not art, that's prostitution!"

We also get to see Pussey's adventures in the world of fine art, his sexual fantasies, his pathetic childhood (in which his parents rejoice upon confirming his heterosexuality by finding a Playboy in his room), his rise to McFarlane-esque fame and fortune, and his eventual death, long after comics have been completely forgotten by society (only Doctor Infinity is remembered, of course). We also get a short criticism of speculator-era comics collecting, one of the few bits of the book that is (slightly) less relevant today than when it was written. All in all, it's a hilarious satire, seemingly coming from a place of deep anger at the comics industry (both "mainstream" and "indie" flavors) and the effect it has on those working within it. It seems nobody is spared Clowes' wrath; it was probably quite therapeutic for him to get this out of his system. I'm glad he did, since it makes for a hilarious read. Now I just need to read some manga or something which will make me feel positive about comics again.
-----

Okay, that's the last post before the trip. I've put all the books I'm bringing over on the sidebar, mostly because it amuses me to see such a long list under "currently reading". As I said, I might manage to write something while I'm away, but it probably won't have any images or anything spiffy like that. Maybe some movie reviews, since I've seen a few recently that I feel like I should talk about. So stay tuned, but don't expect too much. See you when I get back!
Posted by Unknown at 11:41 AM