100 Bullets: Once Upon a Crime: I hope this is readable, and not just a repetition of "Oh, shit, this is awesome!"

This is a tough one to review, since it's one of the few series that reduces me to the level of frothing fanboy. I'll see if I can keep it coherent.

100 Bullets volume 11: Once Upon a Crime
Written by Brian Azzarello
Art by Eduardo Risso 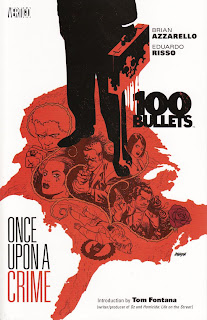 By this volume, 100 Bullets seems to have abandoned its original concept of violent tales of revenge and morality, now focusing completely on shadowy conspiracies, manipulations, alliances, and double-crosses among its large cast of characters. But that's fine; that stuff was all in the background of the series from the beginning; it's just moved to the forefront this late in the game. This volume collects issues 76-83, and the series is set to end with the one hundredth installment, so Azzarello is spending the majority of the time setting up the pieces for the final conflict and slowly revealing more and more of the backstory. It's quite satisfying for a long-time reader, but even those who have been following the series from the start might have trouble keeping track of who is who and how all the various characters are related (I've tried to do what I can to remedy that situation; see below).

We get two stories in this book [I guess I'll have SPOILERS from this point on, so don't read the rest of this if you haven't read the book!]. The first one follows all of the living Minutemen, letting us know who is allied with whom and revealing where loyalties lie. At this point, Lono has gathered his own group of rogue Minutemen (Loop, Victor, and Jack), and he is acting as the Trust's warlord, reporting to Augustus Medici. Graves has gathered Cole Burns and Remi Rome to his side, but even though he seems to be preparing for war with the Trust, there have been hints that he might be in league with Augustus, possibly planning to eliminate the rest of the Trust and place him at the head. Both Lono and Graves are trying to get Dizzy (Lono wants revenge because she killed Mr. Shepherd, and Graves wants her to be a Minuteman), who is holed up in Mexico with Wiley, Mr. Branch, and Benito Medici. And she wants to kill Graves for brainwashing her into killing Shepherd. Whew! This all plays out in a mixture of violence and double-crosses, and when the dust settles, Wiley is dead and Dizzy has chosen to become a Minuteman and work for Graves. Also, Victor is revealed to be working for Graves rather than Lono, and we get a hint of Lono's true intentions; he might be planning to kill Augustus and install Benito as the head of the Trust, pulling the strings from behind the scenes.

I love watching this all play out, and Azzarello has a great grasp of how to set up a tense conflict and "resolve" it in a surprising manner, but still keep us wanting to know more about what exactly is going on. He's been building these characters for so long, we know them really well and can predict how they'll act. Actually, that's not true for the most recently introduced character, Remi, who was only introduced in the last volume, and sure enough, he provides the most unexpected moment of the story; we don't know him well enough yet to know what he'll do, so he's the one to surprise us. Nicely done, as always.

The second story in the book concerns Remi's brother Ronnie, who has gone to Rome to collect a painting, the same painting that Graves and Cole sent Mr. Branch to retrieve from Echo Memoria, a woman who has been haunting the fringes of the series for quite some time. It's an interesting little tale of sex and violence, and it ends somewhat ambiguously; I'm not sure if Ronnie is dead or not (but I suspect he survived), and Echo still seems to be surviving and involving herself in the main plot. She's something of a wild card, not seeming to have any loyalties and relying on her sexiness and manipulative nature to get by. I'm sure we'll see her true role in the future, as well as the significance of the painting (I assume it's the one with the word "Croatoa", but I don't know how that is important, since all the Minutemen have been awakened, and the painting isn't needed for that anyway).

At the same time as the Echo/Ronny plot is transpiring, Graves and Dizzy are in New York to take care of some business involving the late Mr. Shepherd, and we see a flashback detailing how Graves and Mr. Hughes first recruited Shepherd into the Minutemen. It's an interesting look into the past of the characters, but I don't know how much it really reveals. Maybe it will gain more significance later.

I realize I haven't mentioned the art, but I don't really know what to say that hasn't been said about Eduardo Risso already. He's as amazing as ever, portraying characters with flair, detailing beautiful landscapes (both urban and rural) and shadow-filled interiors, and delivering gory, visceral violence when needed. He seems to knock this stuff out like it's second nature, and it's as good as it's ever been. He's one of my favorite artists, and I can't praise him enough.

So it's another good collection of one of my favorite series, and it's leading toward an apocalyptic ending. I can't wait to read more.
-----

As I mentioned above, it can be hard to keep track of all the characters in the book, so a few months ago (after I read volume 10), I made a character chart showing all the relationships between characters. Well, I've updated it to show everything that has happened or been revealed as of volume 11, and here it is [SPOILERS for pretty much the whole series]: 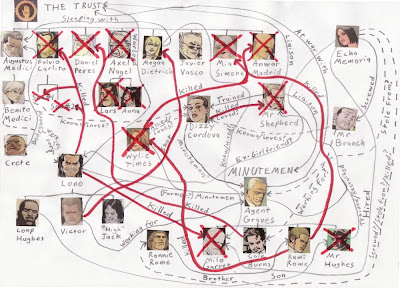 It might not be perfect, especially since I couldn't really figure out how to portray that Graves might be secretly working with Augustus Medici, or that Lono might be planning to betray Augustus. And I probably should have added that Megan Dietrich's father was killed by six of the seven Minutemen, in the flashback that we've seen parts of several times over the course of the series. But I didn't have room. When the next volume comes out, I'll probably try to redo the whole thing, preferably in some sort of electronic format that doesn't look so amateurish. Until then, enjoy!
-----
UPDATE, a year later:
I've completed a much prettier version of the chart, so check it out.  To be updated soon, when I finish reading volume 12!