I only got three comics this week, and they were all the final issues of miniseries. Weird. 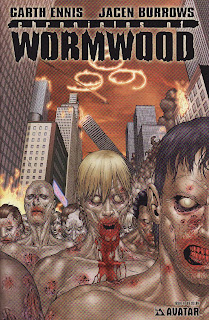 [There are SPOILERS throughout this whole review! Watch out!] Well, this was a fun little story, lending a personal view to the tool of the Biblical apocalypse. There's some funny bits, like God having gone insane after realizing what he'd created when he gave people free will, or Jimmy (the rabbit) peeing in Satan's drink, then reacting appropriately when Satan finds out: 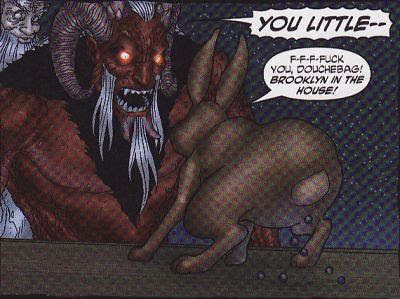 Ennis also strives for an emotional ending, with Wormwood faced with the choice of whether to kill Jesus or not. If he kills Jesus, he brings about Armageddon, but if he doesn't, Jesus is cursed with eternal torment. And Jesus being his best friend doesn't help any. The final decision is somewhat satisfying, although it's not too much of a surprise, since I think any reader was expecting Wormwood to find a way out of the situation. It's a nice moment though, with Jay begging to be killed because he can't bear the Messianic expectations everyone has for him and Wormwood not wanting to kill him because he believes Jay was the best thing to ever happen to Earth, even if it was an accident. It's not a bad look at Christianity and Ennis's view of the religion. He certainly has issues with it, but he sure works them out in an entertaining manner.

The Dark Tower: The Gunslinger Born #7 (of 7)
Written by Robin Furth and Peter David
Art by Jae Lee and Richard Isanove 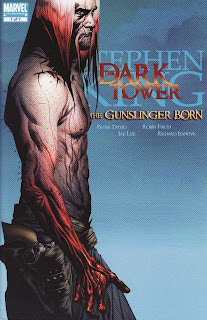 Well, now that this miniseries is over, I'm not sure what to think about it. It was pretty entertaining, with some incredible art, but I don't know if I enjoyed it too much. I think I might be bothered by the ending to this story, which sees the death of a likable character with the intention of motivating the hero. I don't know if that's a cliche in Stephen King books, but it sure is in comics, so it was pretty disappointing to me.

There was some nice violence in this issue though, with a bunch of people being killed by slingshot:

And a hell of a freaky scene involving the nasty old lady witch character: 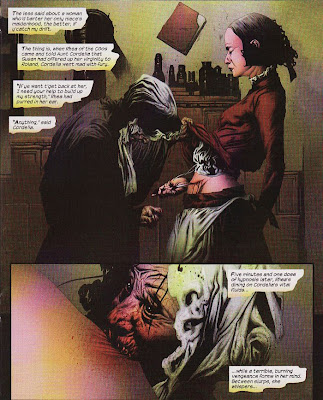 Maybe my problem is that I haven't read the novels. It's kind of hard to get into an adaptation of a small portion of a lengthy series of books. Perhaps the real audience here is those who are already familiar with the stories.

So I don't know. I might consider getting the next miniseries, but I might decide not to. Perhaps it will read better as one book rather than a monthly serial. I wouldn't say I'm sorry to have read this (did I mention the beautiful art?), but I haven't decided whether I want to read any more of it.
----- 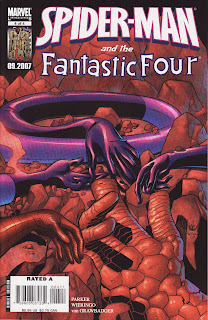 Well, this was one hell of a fun story, featuring Spidey and the FF taking on an invading alien race with the help of the Impossible Man, Doctor Doom, and the Knights of Wundagore. This issue sees the big showdown, and there's some crazy stuff, especially the attack of the entire conglomerate of the Poppupian race (Impossible Man's people): 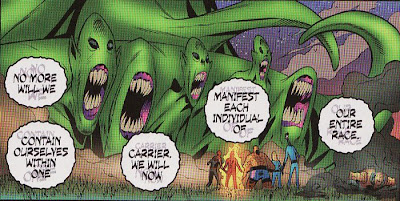 Freaky. There are also some good monster fights, lots of explosions, and a canny solution to the whole problem. I was a little bothered by the idea that our team would doom another planet to assimilation by the H'mojen, but luckily they found a more elegant way out of the dilemma. Nice thinking, guys! Jeff Parker manages to include some of the gags he does so well, like Johnny trying to distract the Popuppians:

Or Ben realizing he can finally attack the bad guy: 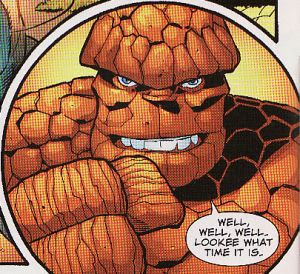 And Wieringo's art is excellent, as always. He does big action really well, but it's all bright and fun, not dark or scary at all. It makes for a good read.

So I recommend this to anyone who likes a good, fun superhero book. That said, my tastes have been moving away from this sort of thing lately, so if the first issue was coming out next week, I probably wouldn't bother with it. I don't regret buying it or anything, especially since Parker is one of the best writers working at Marvel right now, but since this sort of book is interesting me less and less, I will probably be staying away from stuff like it in the future. Oh well, my loss, probably.
-----

And that's all for this week. I'm going out of town for the weekend, so I probably won't do any major posts until Sunday night. I do have a Kirby post lined up for tomorrow though. See you later!
Posted by Unknown at 9:50 PM