In conclusion, Jack Kirby is awesome

So, I've finished up with my series of panels from the first volume of Jack Kirby's Fourth World Omnibus, with (at least) one panel for each issue contained within. It's been a fun ride, and I can't wait to read the next volume. I'm struck by the almost casual nature of Kirby's writing, throwing out crazy ideas left and right and punctuating them with incredible, otherworldly images and gut-shaking action. In Mark Evanier's afterword, he states that Kirby worked in an improvisational manner, "making it up as he went along". While this paints a nice picture of the artist, I find it somewhat hard to believe, especially considering the seeds he planted in these early issues pointing toward the nature of later revelations (specifically, the origins of Orion and Scott Free). I find it more likely he had a whole mythology in mind that he wanted to tell, but the improvisation came in when he thought of new ideas, new visuals to put on paper, rhythmic dialogue to put in characters' mouths, and epic battles that could be depicted. But that's just my guess as to how things happened. Whatever the case, he was an amazing storyteller, and an unmatched visual stylist that is often imitated, but never duplicated.

I think I've posted enough panels, even though I could probably find many more that demonstrate Kirby's crazy ideas, weird dialogue, epic action, and beautiful visuals. So instead I'll finish by posting a few of my favorite covers of issues in this volume. I'm too young to have seen these issues on newsstands or store shelves, but I still find them fascinating and irresistible. The combination of wild imagery and beckoning text must have made it impossible to keep oneself from opening the comic to find out what transpired inside. Here's one of my favorites, from Mister Miracle #2: 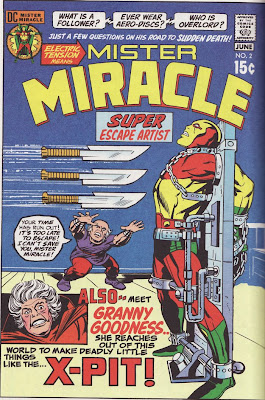 "What is a follower? Ever wear aero-discs? Who is Overlord?" These questions, combined with the "How's he going to get out of that?" image are a perfectly enticing combination. And then there's this cover, which is what Chris Sims and I were referring to in the comments to a previous post: 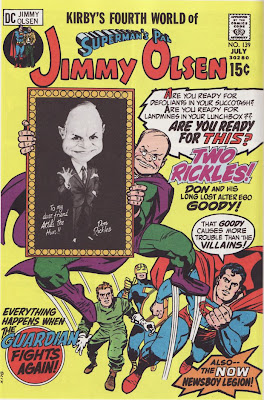 The inclusion of Don Rickles makes for a weird story, and the cover sells it perfectly, with the strange, goofy jokes accompanying the phrase "Are you ready for THIS?" Wonderful. And then there's this cover, from Mister Miracle #3: 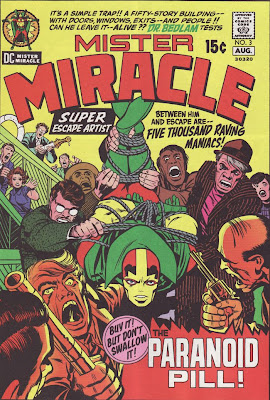 I love the text describing the situation, and the faces of the "raving maniacs" really sell the danger. Mister Miracle covers seemed to bring out the best in Kirby (judging from my limited sample), with their elaborate bondage mechanisms that always seem to encase the hero (and from which we know he will easily escape). It's compelling stuff. I can't wait to see what's in store in future volumes.

So, bring on more Fourth World! I'll be ready to dive right in, filling (and probably warping) my mind with crazy Kirby goodness. The wait for the next volume will surely be insufferable.
-----

Well, I was going to do another review tonight, but it didn't happen. I should get to it (and maybe more) tomorrow. Really!
Posted by Unknown at 9:58 PM