Shojo Beat: Even Nana-less, this is some good reading

Looks like I'm still hooked on the girly manga: 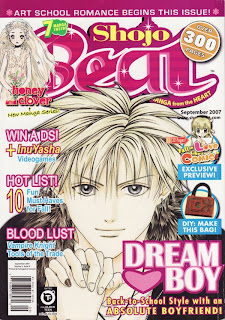 Lots of good stuff in this issue, including illustrations of the magazine's mascot, the "Beat Girl", by Koren Shadmi:

I'll only briefly mention some of the manga series, including the final serialized chapter of Baby & Me, which sees the two kids tearfully reunited with their father after escaping the clutches of their dastardly great aunt. It's been a decent series, but I'm ready to read something else. If you like it, it will continue being published in collections.

As for Vampire Knight, I've never really liked the series, but I read it every month, and it's kind of grown on me. Not enough that I would bother buying digests if it ceases serialization, but I think, after fifteen chapters, the characters are finally starting to gain some definition, and their relationships are almost interesting. The latest plot has to do with a vampire girl joining the Night Class, and she has some connection to Zero, possibly even being a form of the vampire that killed his family and infected him with vampirism. I'm almost awaiting the next chapter! But not really.

Crimson Hero continues to be good, lately focusing on the boys' team as much as the girls'. It definitely seems like a comic for girls, with the boys confronting each other emotionally and struggling to hold back tears after making confessions about their passion for the sport or whatever. It's pretty amusing, especially considering how reserved Japanese culture is. I have a theory about how Japanese art seems to express such exaggerated emotions as a release for the people, who usually are expected to keep everything bottled up. But this story is different than the usual dramatic weeping that you see in manga or anime, with male characters quietly weeping and trying to hide it. It seems more like an attempt to make teenage girls relate to them, which definitely makes sense, considering the audience. Eh, I just thought it was interesting.

So let's look more in-depth at the other series this month, starting with a preview of an upcoming digest series:

Fall in Love Like a Comic
By Chitose Yagami

The heroine of this series is a young teenager who is also a manga artist. She writes "smutty" romantic comics despite never having had a boyfriend. Actually, I don't know if her comics are supposed to actually be pornographic, or just a bit risqué. Nobody at school knows about her job, except her best friend. Her editor encourages her to find a boyfriend because he thinks she "could really add depth to [her] work by experiencing real love". Luckily, she runs into the cutest guy in school and accidentally drops the chapter she just completed. He picks it up and discovers her secret, then offers to be her boyfriend to help her get experience. Actually, he seems to sort of blackmail her into messing around with him, leading to the weird sort of sexual politics you see in some manga series, like Hot Gimmick. At least that's where it seems to be headed, with her ending the chapter thinking, "Can I really improve my manga by going out with a guy like this?!" It seems like a decent enough story, with appealing (if a bit generic) art and a lot of physical comedy. It might be worth reading, if it's your sort of thing.

This series is going in an odd direction, possibly hitting a reset button of sorts. Last chapter, we found out that the robotic Night had been damaged beyond repair, and the company was going to have to shut him down. This seems odd to me, since if they could transfer his brain/programming into a miniature form, couldn't they put it in another full-size body? Apparently they can't. The company offers to give Riiko a replacement, but that wouldn't be the same, so she turns them down, figuring Night is gone forever. We get some moroseness and weepy stuff, but then Night shows up at the end of the chapter, and he's okay again! I assume we'll get some sort of explanation for how it was possible, but it seems like contrived drama to me. An editor's note says theres "only about a volume" of the series left, so maybe Watase was running out of ideas here. She does give us one or two funny bits, including this one, in which Gaku informs Riiko and Soshi that his company is from the future (by the way, make sure to read right-to-left): 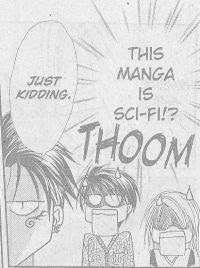 But other than that, kind of a downer. We'll see where it goes from here, but I think I'm ready for it to end.

And now we get to the highly-anticipated (by me, at least) debut of this new series. It's a story about a bunch of art students at the real-life Musashino Art University, and it's a fun slice-of-life series with goofy, lovable characters. The main character seems to be Yuta Takemoto, a sophomore who is constantly tormented by an upperclassman named Morita. They both live in an apartment, along with another upperclassman, Mayama. Morita is a crazy goofball, often disappearing for weeks at a time, then returning with large amounts of cash and collapsing to sleep for days straight. Much of the first chapter (it looks like each issue of the magazine is going to print two short chapters of the series) involves Takemoto trying to wake him up so he can get to a class that he needs in order to graduate, leading to this hilarious scene: 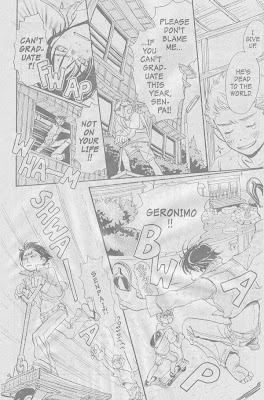 Later, Mayama and Takemoto meet Hagumi Hanamoto, a cute art student who is the niece of one of their professors. She's small (even midget-like) and shy, and Takemoto seems to instantly fall in love. Unfortunately, so does Morita, although he shows it in a much more crazy manner: 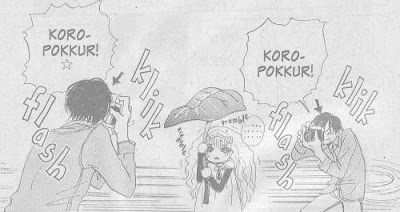 By the way, a koropukkur is a sort of nymph or gnome from Ainu mythology. Morita gives her a big leaf so he can take pictures of her, and we find out later that he's been publishing them on a website, drawing in the fairy-perverts and making lots of money from advertising. Bastard. There are plenty of other scenes of bonding and friendship and the development of unrequited love, and it's quite amusing and enjoyable. I can't wait to read more.

By the way, I've watched several episodes of the anime adaptation of the series, and it's pretty much a perfect translation, as far as I can tell. I'm sure I'll get beyond the stuff I've seen pretty quickly, but it seems very familiar right now. If the anime gets licensed here in the U.S., I highly recommend it.

Wow, I knew this series was going to be tragi-comic, but I wasn't expected for the events of this chapter. Reading it felt like getting punched in the gut. It's incredibly moving stuff, but it still blends in some good comedy. At New Years, Ann goes to a shrine with her mother, and they write their wishes for the year on tablets. Ann's mom discovers a tablet she wrote years ago, which said "I wish someone would come and take me away from here". Well, as we know, she got her wish, having married her husband and moved to Tokyo. But it didn't work out, with her divorcing him and moving back in with her parents. We already know she has problems with depression, and it's devastating to watch her realize that her dreams have been smashed: 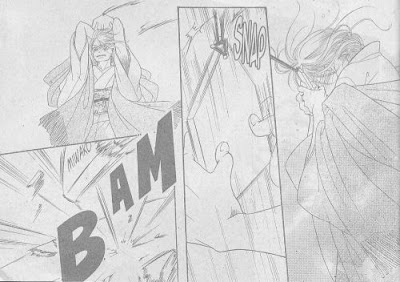 I won't reveal what happens next, but it's incredibly sad, and it leads to some harrowingly emotional moments. We do get some catharsis at the end of the chapter, but it's still a tough read. It's really well done. I just hope the next chapter is a bit more cheerful. I don't know how much more of this I can take.
-----

And that's it for this issue. Next month, more from these series, plus new series Haruka: Beyond the Stream of Time, by Tohko Mizuno. We'll see how it goes.
Posted by Unknown at 7:28 PM