Drifting Classroom: The insanity does not cease, and neither does the screaming 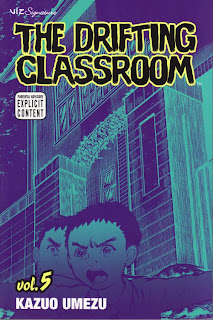 So, to start off the look at this volume, how about some of the "Oh shit!" moments contained within? 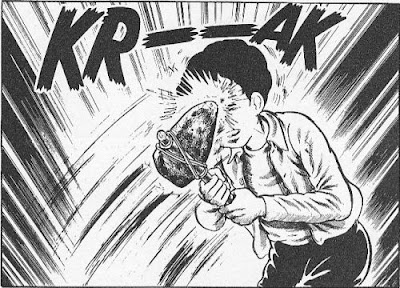 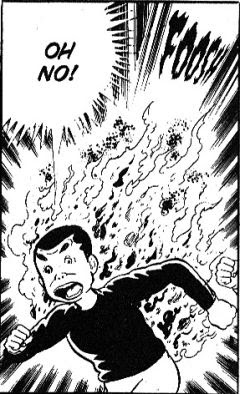 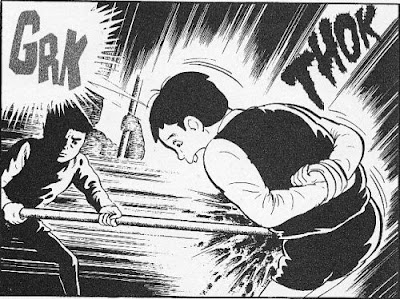 Each volume of the series is full of stuff like that, with young kids committing horrific acts of violence on each other. And then there's the external stuff, like kids being devoured by swarms of insects, or the gruesome demise of others from the bubonic plague. It's freaky stuff, and it's all delivered in the series' signature feverish, high-volume style, with characters seemingly screaming every line with their mouths wide open.

The metaphorical content in this issue (which I've been keeping an eye out for ever since manga scholar Matt Thorn left this comment on my review of the second volume) seems lighter than normal this issue, at least to my Japanese-history-ignorant eye. Other than the usual theme of competition taken to its extreme, we have a look at whether it's worth it to care for a sick child, which I take as representative of a kid who is struggling in his education. Should the school exhaust resources to keep the kid from dying (flunking out), or is there a point when they should give up on him? I suppose the spreading disease could also be a metaphor for delinquent children having a bad influence on others. It's always something to think about when I'm reading this series, although one could certainly choose to ignore it and just focus on the general insanity.

I notice I don't talk about the art too much, but it's pretty damn good. Umezu has such a unique style, full of motion lines and characters seemingly frozen in mid-action. He draws running characters almost like they're floating over the ground in a running position; it really adds to the surreality of the situation. He also uses a lot of black humor, which is necessary to keep this from being the most depressing story ever written. I love wacky moments like this one: 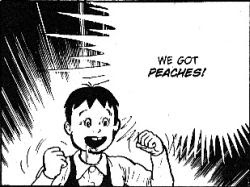 And he obviously goes for exaggeration, nearly always drawing characters at the extremes of emotion. So when a moment comes that makes the kids even more terrified than usual, he somehow exaggerates their expressions even more:

I guess by this point, if you're not on board with the series, there's no point in going any further. But if you're as enraptured as I am, the crazy story just keeps getting better. I've got to hunt down the next volume stat.
Posted by Unknown at 9:18 PM