Maintenance: I hope this book doesn't need it

Hey, I'm getting to one that I've been meaning to review for a long time now! Go me! 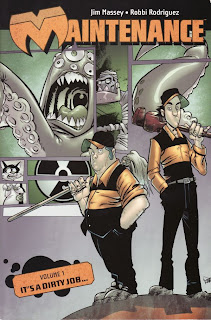 I reviewed the first two issues of this series, when they came out, but I missed the third for some reason. Luckily, Oni Press was kind enough to send me a review copy of the first trade paperback of the series, which collects the first three issues.

So how does the series work as a collected book? Pretty well, I think. It's fun to see the workings of a company dedicated to mad scientist research from the viewpoint of a couple low-level grunts, the guys who have to clean up the messes when experiments go wrong, like a "marauding gigomorph" melting all over a lab. There are some good running jokes, like a zombie kitten stuck in the cafeteria vending machine or the alien who has been leading scientists on with the promise of technological secrets ever since crashing in Roswell in 1947.

I think the third issue stumbles a bit, being less funny than the first two. Its plot concerns an alien invasion of Terromax, with the seeming intent to capture K'arl, the aforementioned alien. It's well-drawn and everything, but the focus seems to be on action and developing the romance between Manny and Mendy, the company's receptionist, rather than the madcap humor and silly pop culture references of the first two issues. It's certainly not bad, but it seems to have lost a bit of energy.

So it's a pretty good collection of a fun series. I would certainly recommend it to those looking for a fun humor book. If only I knew what was in store in future issues... 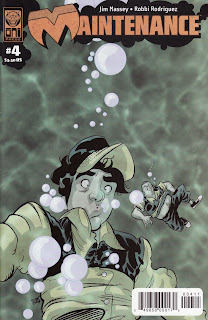 Hey, look at that! The fourth issue of the series came out last week, so I can see right away what happens next! And the verdict is...still less funny than it should be. Rather than getting back to the zany comedy, this issue seems concerned with establishing series continuity, addressing events from the first and third issues (and the second, if you count a cameo by the caveman scientist of that issue), and even ending with a "to be continued...". The main plot concerns a scientist blackmailing Doug and Manny into shrinking themselves down to tiny size and entering the company's sewer system in order to roust out some rogue microorganisms called "Clogoids". It potentially sets up some fun shenanigans for next issue, but other than a few throwaway jokes, there's not much of note in this installment.

So it's certainly not too late for the series to get back on track. I hope we get more humor and less continuity in the next issue, and more of the same after that. I can't really recommend this one though, but maybe it'll be worth getting as part of the second collection.