"The American dream--it works! You just have to eat apple pie and believe!" 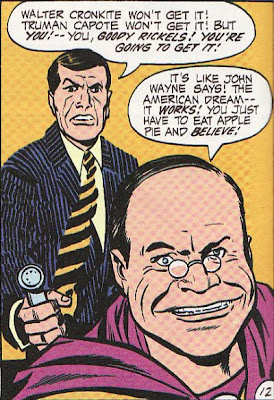 So Goody Rickels appears to be Don Rickles's opposite, being nice and encouraging rather than mean and insulting. What a strange creation. He does get some good moments in this issue, like the old gag where he takes out a bad guy accidentally: 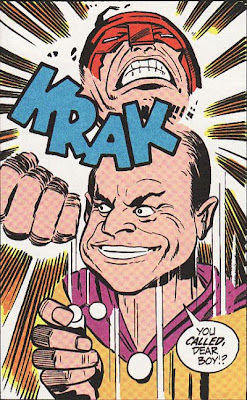 That's always fun. I love how when Morgan Edge meets Goody he thinks "The solution is obvious! This man must be killed!", not because he's dangerous to Darkseid's plans or anything, but just because he's annoying. Later, Jimmy Olsen, the Guardian, and Goody fall prey to an Intergang mobster's evil plan: 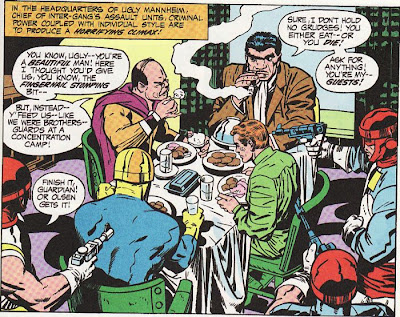 He's feeding them tasteless food! Oh no! Actually, it's a bit more dramatic than that, but I went for the cheap joke. This issue ends on a cliffhanger, so I'll have to wait until the next volume of the Omnibus to find out how the trio will deal with their indigestion, as well as the fate of Superman/Clark Kent, who has been warped across the galaxy. Nuts!

One more issue to go before the end of this volume. Stay tuned tomorrow for "The Paranoid Pill!"
-----

By the way, this is the 300th post on Warren Peace Sings the Blues. On the past two centennial posts, I did some sort of special (i.e. long) posts, but I don't feel like doing that this time, so I'll just note the milestone. Yay, me!
Posted by Unknown at 10:48 PM