Clockwork Creature: It just wants to be loved

Here's one that might not be on people's radar: 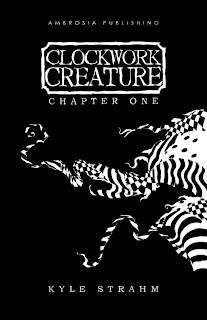 This is an odd little book that's coming out soon from Ambrosia Publishing. It's a story about the titular creature, which roams an old countryside (the book takes place in an indeterminate time period, although a Tommy Gun is referred to as a "weapon from the future"), apparently kidnapping young men. The townsfolk are fearful, wondering what to do, when a huckster named Baron Von Salt appears and proposes to lead them to kill the creature. But is it a malevolent being, or just misunderstood?

It's a fairly simple tale, but what sets it apart is the striking art style, rendered in high-contrast black and white. The people are all grotesque-looking, and everything is portrayed in silhouettes and deep shadows. Some of the characters look a bit dodgy (perhaps purposefully so), but I'm impressed with Strahm's economy of line, sometimes getting information across with only minimal detail: 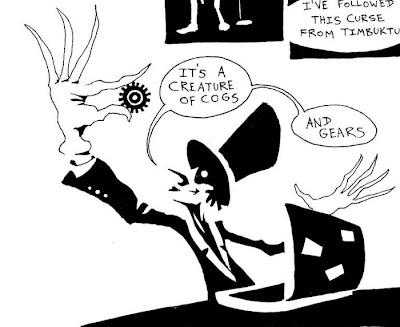 He presents a cool, creepy atmosphere, and while the art sometimes seems simplistic, he pulls off some cool tricks, like this zoom in on a windmill, revealing increasing levels of detail: 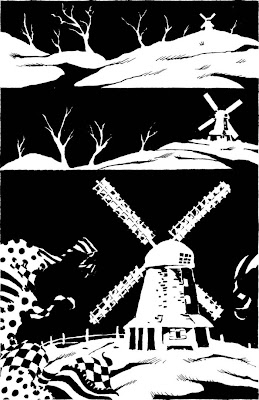 I also really like the tatters of patchwork material that cover the creature, which can be seen in the above picture (and the cover). There's also a nice sound effect, with the words "Toc toc" filling pages whenever the creature is present: 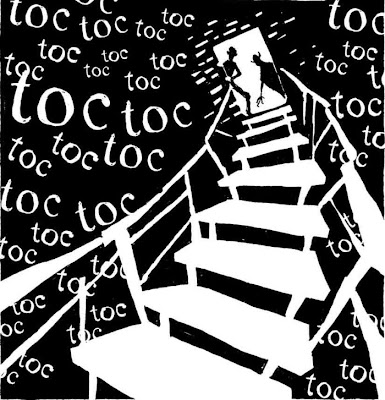 I'm not sure what the story is about; I'll have to think it over some more. I always jump to religious symbolism when trying to interpret stuff like this, but that might not be the case. It's probably more about fear of the unknown, and the willingness of people to be led, even when they don't understand where they're going. And a dash of man's propensity toward violence.

All in all, it's an interesting book, from a creator and publisher that I wasn't previously familiar with. This is chapter one, which indicates that future chapters will be forthcoming. The book is $6.95 for 48 pages, and it comes out on September 7; you can also check it out on Ambrosia's website. I think it's definitely worth a look.

This review was based on a complimentary electronic copy provided by the publisher.
Posted by Unknown at 10:38 PM