EDIT: A commenter recommended that I note that there are SPOILERS in the following review. I guess I hadn't thought it was necessary since the stories are a good 20 years old, but if I'm reading them for the first time, I'm sure others are too. I did try not to give too much away, and I feel that the best part of the stories is seeing the characters develop and interact with each other rather than plot points, but I suppose I should have put up a warning anyway. Sorry if I ruined anything for anybody!

The Girl from H.O.P.P.E.R.S.
By Jaime Hernandez 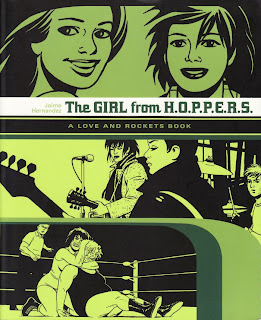 Well, this is a hell of a follow-up to Maggie the Mechanic, taking care of nearly all the "complaints" I had about that volume and going in exactly the direction I liked. Nicely done, Jaime, anticipating my preferences by twenty years! For anyone who doesn't want to follow that link, I loved the stories in the first volume, but preferred the emotional, character-driven stuff over the sci-fi goofiness. Well, luckily for me, Jaime almost completely drops the fantastical plots and focuses on character development, with funny and moving stories about Maggie, Hopey, and the various others that travel in their circles. Of course, we still get some stories about women's wrestling and the adventures of Rena Titañon; I especially liked the conclusion of her conflict with her longtime nemesis Bull Marie, showing how Rena might be going down the same path as that mean old broad: 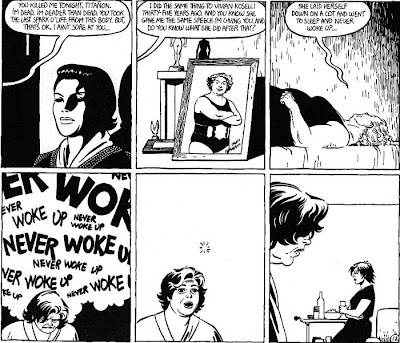 That's actually a really nice moment, and Jaime sets it up so well, alluding to the match in the previous story, but then jumping ahead years later as we see an older Rena trying to get back into wrestling and regain the championship. She's fighting dirty now, and she remembers how it all went down with Marie, realizing that she might be turning into that kind of person. After that, we don't hear from Rena for the rest of the volume, so who knows what happened? Maybe she quit wrestling and went to look for her husband. I guess I'll find out in later volumes.

After the Rena stories, we jump right into the meat of this volume, with a series of stories about life in Hoppers 13 and the various characters Maggie and Hopey interact with. The key story in this section (I'm defining "section" kind of loosely here, since there are no divisions between sections other than those in my head, and even those are kind of fuzzy) is "Vida Loca: The Death of Speedy Ortiz". It's one that I always hear about as a great moment in Love and Rockets history, and that's probably true, although it's much richer when considered with the material surrounding it. In these stories, we get to know the guys that hang around the neighborhood, especially Doyle, Ray, and Speedy. We see Maggie and Hopey's housing problems, after Izzy threw them out and they had to find new places to stay, with Maggie eventually moving back in with her aunt (Vicki Glori, a wrestling rival of Rena Titañon's). We meet some other characters, including Maggie's friend Danita and Esther, Maggie's teenage sister. We get some flashbacks to the early days of Maggie and Hopey's relationship, learning more about how they became such good friends.

These details all build up to a boiling point in the "Death of Speedy" story, which is a real tour de force. We know what's eventually going to happen from reading the title, but how we get there is quite a journey. It seems like he's going to get caught up in the escalating gang violence between Hoppers and the nearby Dairytown, but the real conflicts in the story are romantic ones. Speedy, being kind of a player, is interested in Maggie, Esther, and another woman named Blanca, who isn't too fond of Maggie even without romance getting in the way. Maggie is kind of interested in Speedy, but she's also got her eye on the recently-returned Ray D., who seems to like her as well. Oh, and Maggie is also kind of into Hopey, but that doesn't really factor into this story too much. Little Esther causes a lot of the problems, since she also has a Dairytown boyfriend, giving that gang an excuse to get aggressive with Hoppers. And the violence is scary, since it seems so stupid and pointless. Some, like Speedy (who has more hormonal concerns on his mind), the more mature Ray, and the ambivalent Doyle, don't seem interested in the conflict, but others feel they have to "defend their turf" in a ridiculous display of machismo. On the girls' front, Blanca feels the same way about Ray, vowing to hurt any other girl who touches him (or maybe even Ray himself for cheating on her). It's a realistically complex situation, set up perfectly in a way that barrels horrifically toward the inevitable conclusion, and we can't tear our eyes away: 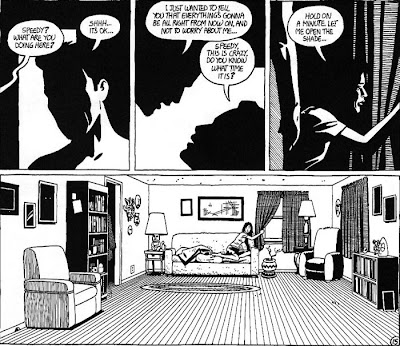 After the emotional turmoil of that story, it's easy to see why the characters didn't want to continue their lives in the same manner. Hopey ends up going on a lengthy tour with her band, leading to all sorts of crazy adventures far away from the old neighborhood, some of them involving Penny Century, who has married the millionaire H.R. Costigan and is content to live in his mansion acting out superhero fantasies. Maggie gets together with Ray in the absence of Hopey, but eventually ends up going on tour with her aunt, playing the role of Vicki Glori's insurance agent as Vicki tries to get her championship belt insured.

(By the way, you gotta feel for poor Ray. He really seems to care for Maggie, but he knows he'll never be able to compete with Hopey in her mind, so he's sure it's going to end someday. Sad, really).

At one point, we jump forward a couple years in the timeline, and see that Maggie is still with Ray. But we know she's going to be reunited with Hopey eventually, and after searching for her for a while and eventually giving up, Maggie meets up with Penny and is clued in to her pal's whereabouts. It's a touching, fun reunion: 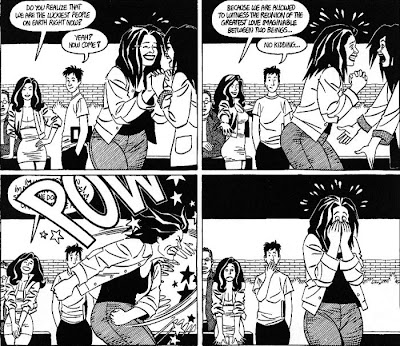 And it doesn't take long before they're back up to their old antics. It's always good to see the two of them together, and although the volume ends before we see much of them after their reunion, I'm sure they'll have many more adventures to come. I certainly can't wait to read them.

The volume ends with a fascinating story that is, as the back cover text says, "one of the most acclaimed stories in Love and Rockets history". It's called "Flies on the Ceiling", and it's about Izzy's experiences in Mexico, which had been hinted at but never explained. We did see in flashbacks that she was fairly normal at one point (in terms of dress, at least), but in the "present", she is all spooky and gothic, always dressing in black and talking about death. The revelation of what changed her is freaky and supernatural; she fled to Mexico after shaming her family by having an abortion. There, she stumbled into a relationship with a peasant man and his son, but she started having visions of the devil (and other weird shit):

Eventually, she conquers her fear and moves back to the U.S., but it's a crazy ride, with lots of surreal imagery, which is kind of a departure for Jaime, who often dabbled in the fantastical, but rarely the supernatural. I feel bad for the poor farmer; it seemed like they were happy and he had found a new mother for his son, but her crazy issues got in the way of that. Bummer. The story ends with Izzy saying that the devil, when she confronted him, said that he might one day turn up as flies on her ceiling. Earlier (but later in chronological terms), we saw Izzy worried about her brother Speedy right before he died, and she was babbling about flies on the ceiling. This revelation of what she was talking about is very effectively creepy, and a nice (if dark) way to end the volume.

I love Jaime's storytelling techniques, and one thing he does a lot of in this volume is flashbacks that inform us about his characters' past. Those might have been my favorite sequences in the volume, and it's fascinating to see how the characters have changed. There's an interesting story about Doyle's violent past that's rather illuminating, and a story about Ray as a child, but the best ones were about Hopey's induction into the punk lifestyle, courtesy of Terry Downe. I was amazed to see what Hopey looked like before she met Terry: 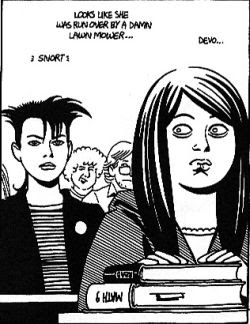 I'll never view a wide-eyed expression of hers the same way after this. We also learn that Terry was Maggie's first lesbian relationship, so now we understand the jealousy that she sometimes exhibits toward Maggie. It's an excellent "deepening" of the characters, and it works very organically. That Jaime is really a skillful storyteller.

And he's a skillful artist too; I could go on and on about the way he draws women (actually, I already have, in my review of the first volume), but I'll just post a couple pictures here, like this study of Maggie from multiple angles:

It's an impressive display of Jaime's grasp on anatomy. Her body seems to have real weight and texture, and the shifts in posture are incredibly realistic. Very nicely done, and art like this can be seen on literally every every page. Wow. I also like the frank depiction of sex and nudity, with no juvenile hiding of "naughty bits" behind strands of hair. Rather, it's natural and realistic, and isn't limited to female characters: 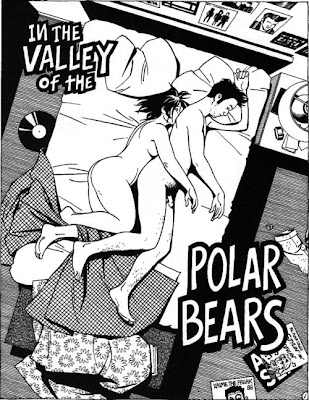 I also wanted to mention that I love the way characters' hair is drawn, especially Maggie's unkempt 'do. There's a sequence when she's on tour with Vicki Glori in which Vicki makes her get her hair done neatly so she can pose as an insurance agent, and it's hilarious: 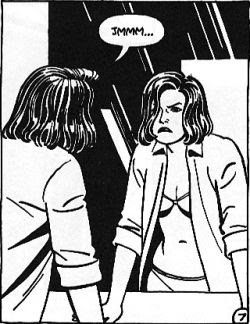 In fact, much of the book is really funny, even if my plot descriptions seem to focus on the serious parts. Characters get up to a lot of goofy antics, and said antics are depicted wonderfully:

And then there are the facial expressions. While the serious emotional depictions are excellently done (I love it whenever a character bites her lower lip), what I really enjoy are the crazy symbolic depictions of anger: 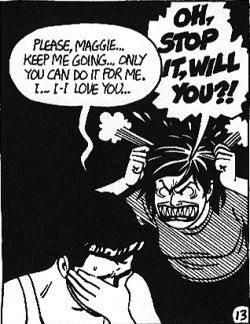 I don't know how Jaime can get away with mixing such serious, emotional plots with panels of characters sprouting pointed teeth and horns, but he somehow pulls it off.

So, I'm once again blown away by the skill and beauty of the art and storytelling. I can't wait until the next volume (which comes out in December 2007). One final note: I've heard Jaime's (and also Gilbert's) artwork compared to that of Archie comics, so it was fun to see the following cameo: 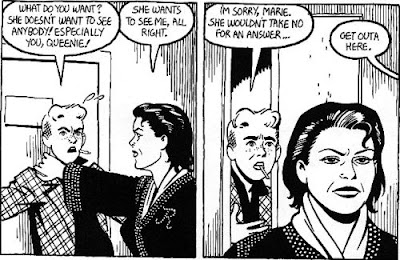 Oh, there's one thing I should mention. I'm going to be going to the Wizard World Chicago convention this Saturday, so if any readers are going to be there (and are interested in meeting me), drop me a line in the comments and/or email, and I'll try to get together with you. It should be fun!
Posted by Unknown at 12:13 AM