The Great Yokai War: The Japanese are good for testing the WST

That's right, this movie is a really good test of the WST (Weird Shit Tolerance). Read on: 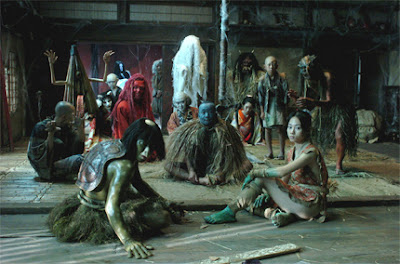 If you ever wish to learn about the craziness of Japanese folklore, this is the film to watch. It's a children's movie, about a boy who gets choses as the "Kirin Rider" and sent on a quest to recover a mystical sword and assist a group of yokai, or mystical creatures in a war with a spirit of garbage that wants to destroy humanity. It's kind of the standard Japanese conflict between nature and technology, with the bad guy transforming the good yokai into nasty shapeshifting machine monsters. It's not an especially complex plot, but it's fun to watch just to see the array of bizarre creatures on display, like a woman with an extendable neck, a hopping umbrella with a single bulging eyeball and a long tongue, a one-legged hairy swordsmith (named "One-Leg"), and my favorite, a wall with eyes, arms, and legs. It's actually similar to the crazy creatures that the player encounters in the game Okami, which makes sense, being based on the same folklore. The effects are pretty fake-looking, but still quite entertaining.

Also of note is the crazy finale, in which the bad guys' evil factory turns into a creature that climbs out of the ground and takes flight to attack Tokyo. When some bums spot it flying into the city, one of them says, "It's all right, it's only Gamera." There's a montage of yokai all over Japan hearing about the "festival" in Tokyo, so they all gather, showing up in the middle of the big fight, leading to a shot of literally thousands of freakish creatures surrounding the evil factory, thinking it's a big party. And then there's a crazy sequence of events leading to the defeat of the bad guy, involving a pretty river spirit, a smitten reporter, a bean-washing yokai, and a song about the goodness of azuki beans. It's totally nuts, and the battle leads to the apparent destruction of Tokyo, which nobody seems to care about. It's a hell of a weird ride, but tons of fun, especially if you like this kind of craziness.
-----

By the way, if you're interested in the Japanese folklore, the Wikipedia page for the movie has lots of links to pages about many of the various creatures contained within. It's interesting reading.
Posted by Unknown at 2:26 PM