PX!: This is not a restaurant review

I'll try not to get too effusive with the praise here, since I'm friendly with Manny Trembley, and I don't want to seem biased. But I like this book on its own anyway. Really! 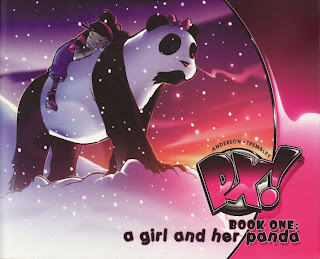 Eric A. Anderson and Manny Trembley have already collaborated on the awesome Sam Noir: Samurai Detective, a super-cool mashup of violent samurai action with hard-boiled detective fiction. Now they bring us another crazy combination of ideas, in this story about a six-year-old girl searching for her kidnapped scientist father with the help of her robotic panda, a dapper English spy seemingly from Victorian times, and a ninja-hating roller-disco samurai. The book started life as a webcomic, so you can read it for free if you like, but I prefer to have a long-form story like this all in one physical volume.

It's a fun book, with lots of action, humor, culture clashes, and sweet moments. The girl, Dahlia, is adorable, and scenes of her just riding around on the panda's back and chatting with it are super-cute: 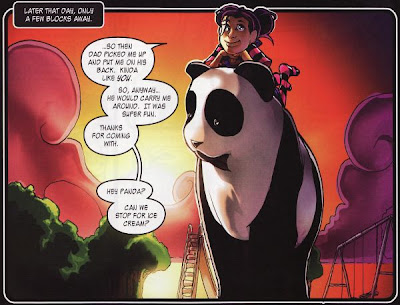 And then you've got lots of crazy action, with the panda wrecking some robots, or Wikkity (the roller-samurai) beating up ninjas: 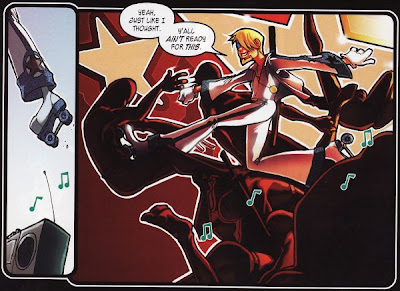 He's a pretty funny character, carrying around a boom box to pump out awesome jams while he's kicking ass, and constantly spouting silly hip-hop dialogue. He also seems to fancy himself a great ronin warrior, as evidenced by a brief peek inside his fantasies of fighting an evil villainess.

The third (or fourth, if you count the panda) member of the group is Weatherby Ian Poppington III, a British secret agent who is hilariously proper, speaking like a stereotypical English fop and trying to get enemies to engage in dueling or fisticuffs. And then there's the villain of the tale, a goat named Pollo who decorates his evil lair in a black-and-yellow checkered taxicab motif. He kidnapped Dahlia's scientist father and is using him to build a doomsday weapon and take over the world. The others end up teaming up to take him down and rescue Dahlia's father, with much craziness along the way.

As can be seen in the above samples, the art is quite good, with an expressive cartoony style, lots of details, and fast-moving, easy-to-follow action. I was especially impressed with the bright, beautiful colors, which really pop on the glossy paper. They're probably created via Photoshop, and they look incredible, whether defining a firelit cave at sunset: 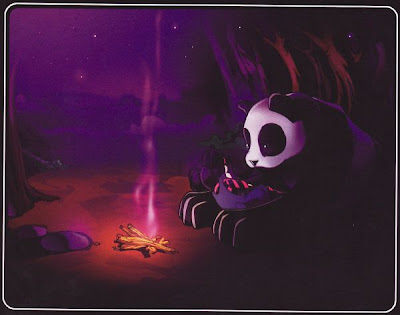 Or giving a lush bamboo forest a beautiful green glow: 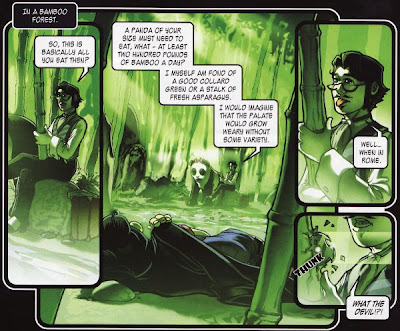 Or any number of other details, like robots, lasers, or golden-hued flashbacks. I thought Trembley's art was good on Sam Noir, but he's working on a whole new level here.

So I heartily recommend the book. It's a fun, crazy, action-filled story, and who knows where it'll go in future volumes. I'll definitely be there to see.
Posted by Unknown at 9:06 PM